What method is used to achieve this look?

I would like to know what method is used to create those grooves in the wood? Someone has an idea? More images here : Link 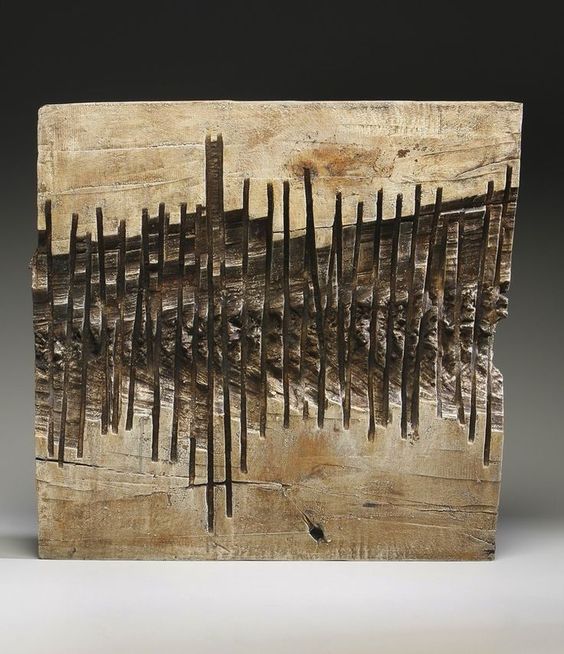 I think a chainsaw was used to get this look. The grooves seem deeper in the middle, suggesting a curved shape. The middle parts could then easily have been chipped away by chisel or hammer, or even broken away by hand.

Lots of wood art is created this way, and these grooves usually serve as a starting point for getting the rough form out of a block of wood. Obviously, it's quite beautiful on its own, as well, exposing and emphasizing the natural texture and shapes of wood.

Miter saw was probably used to make the cuts, by moving the block of wood in half/quarter inch steps. Individual cuts have different depth (and thus the width) but more or less same center, which makes me think of miter saw.

Chopped up wood was then simply hammered out and the whole block was stained or burned with gas torch to make it darker.

Finally, the front surface was planed or sanded, which turned the flat part lighter again.

From the description in the link you provided. It looks like most of the cut marks were done with a flat chisel.

There a lot of textures going on in more than just one picture, to pin point exactly what texture is going on with each one.

From personal experience working with tools for a living. That the texture appears to be done with a cutting wheel, or grinding wheel with angle grinder. As well used with a wood chisel, flat chisel.

There are many pictures in your link, and they use a mix of techniques. This will be easier to address if you identify specific ones. The one you put in your question looks like two kinds of actions.

The slots look like a circular saw was pressed into the wood, centered over the textured area. My first impression of the background texture looked like a wood carving wheel on an angle grinder used in different directions. There are different types available. Here are a few used for rough shaping (images courtesy of Home Depot): 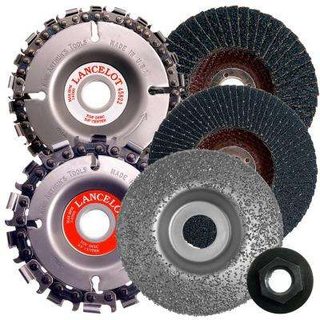 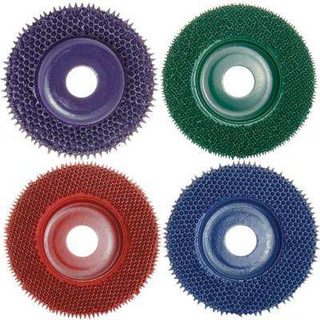 But the actual finished surface you see couldn't have been done that way. Closer examination shows that the texture stops abruptly at the slots, and varies substantially from one side of the slot to the other. A large diameter circular tool couldn't be used to do that. The only tool I can think of that would let you do flat, independent depths between slots would be chisels. So a lot of meticulous work went into that piece, despite how rough it looks.

Update: computercarguy's comment on the question gives the size of the piece, which was a good catch. The artist is American, so I assume the dimensions are in inches rather than centimeters, and that seems to bear out based on the width of the slots.

I have to agree with the comment about the slots not being made by plunging a circular saw. A circular saw could still have been used by setting it to a shallow depth and then moving it to achieve the desired slot length. That would be a consistent kind of tool choice if the rough shaping was done with an angle grinder, and the angles of the slots would be consistent with making the slots by eye.

Close examination of an enlargement of the picture shows that the slots have varying widths. The narrowest are 1/8" wide, which is the thickness of a typical full kerf blade. The widest is roughly double that, which indicates that most of the slots were made in two passes, probably using a guide.

Congenital Optimist's guess of a miter saw is possible if it was a sliding miter saw and the artist used good depth control, but the cuts aren't parallel. The piece could have been slotted at various angles, though. Another possibility is a mini circular saw. They have a small diameter blade that can be moved across the piece. However, I think those have a thinner blade, which wouldn't be consistent with the slots.

7
What are good methods to attach glass to wood?
3
What kind of paints should I use to color / paint on bright wood material?
6
Aligning multi-color woodblock print?
3
Line cutting technique for wood blocks: japanese vs. western
3
Staining wood blue with chemicals
6
Wood used for Christmas Colored Flame Yule Logs?
3
What kind of resin can be used to fill a gap in a piece of wood?
3
Is it possible that the wood used in newer pencils could be a bit better than old ones from same series? Or wood could degrade with time?