Why do complementary colours desaturate each other?

I'm only just recently getting into colour theory, and so far I have found this to be the most shocking and confusing part.

Assuming you are familiar with the concepts of complementary contrast and saturation in broad lines (if not only through the answer of David D), the following anecdote of Goethe's 'discovery' of complementary contrast is very informative in regard to your question. His eyes were once caught by a dark-haired girl in a pub, and, when she moved away, and Goethe was left staring at a white wall, he saw that same girl with dark skin and light hair - the negative of the real image. * 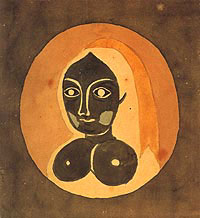 According to Johannes Itten

There is always but one color complementary to a given color. In the color circle, complementary colors are diametrically opposite each other.✝

In the image below, the colours on both sides of each strip are opposites, and it is shown that mixing them more and more with the other colour desaturates them, and finally yields a neutral grey colour in the middle: 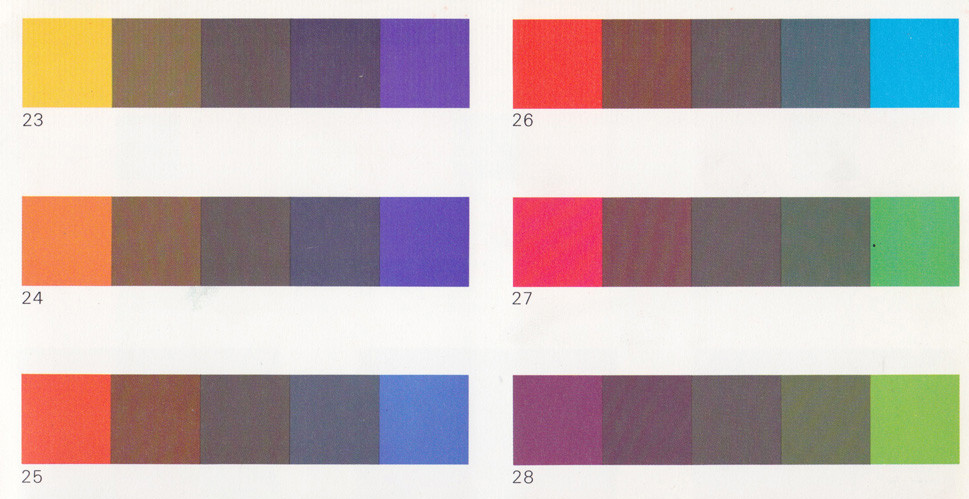 The colours in a complementary contrast are each other's opposites, they cancel each other out. Because of this, they not only desaturate or attenuate the colour intensity, but also the temperature, the value (or lightness), and hue.

Color saturation refers to the intensity of color. When color is fully saturated, the color is considered in purest (truest) version. Techopedia.com

First, each of the six pairs of Complementary Colors always contain one cool and one warm Hue. This means they are the colors with the most contrast.

Each pair of Complementary Colors always contain some combination of all three Primary Colors. For example, in the pair Yellow and Purple, Yellow is one Primary and Purple is a mixture of the other two Primary colors Red and Blue.

From Color-Wheel-Artist.com There are some very good illustrations at the link.

Bottom line: When you mix complementary colors you are blending all three primary colors which reduces intensity/saturation.

I thought I'd attempt a more scientific answer:

First, I think it's important to keep in mind that "color" is a human construct to describe things we see - it makes color theory easier to understand. Colors are not consistent across languages (although there is some logic to them), some "colors" (e.g. silver vs blue) describe different optical qualities, and so on.

So, what are colors? Everything we see is because of light. Light comes into our eyes and hits photosensitive cells, and some of these cells are sensitive to different wavelengths. Most people have three types (some have less, some have more). Our brains perceive these three signals as colors: blue (shortest), green (middle) and red (longest). (more info)

When all types of cones are stimulated evenly, we see white (or grey, depending on the amount of light).

"saturation" is one of the terms we've created for describing colors. Saturation describes how "bright" a color is, or from the other end, how far from white it is. Therefore, we can roughly say that a saturated color hits only one or two types of cone, while desaturated hits all types to some degree.

So, how does one take wavelengths and eye cones and get a circle? The color wheel is a tool created by painters to predict how will different colors behave when mixed together. We figured the wave stuff after we made the wheel. The fact that the new science didn't break it is a testament to artists being really damn good at observing and describing cause-effect relationships.

So, in a way, we can say that we call colors "complimentary" because they desaturate each other. They're on the opposite side of the color wheel, because that's what makes the wheel work as a predictor.

1
What colour is a mix of two perfectly proportioned complementary colours?

7
Dim lighting with colored pencils
8
What is a split primary palette?
0
What color scheme does the Spongebob character use?
4
How can the colour scheme of this painting be described (in technical terms)?
1
Is there a method for setting up my palette on axes by Hue, Value, and Intensity?
5
How to dye or tint epoxy resin to produce translucent colors?
1
What colour is a mix of two perfectly proportioned complementary colours?
3
How to tell which way a colour is leaning?
2
How to mix burnt umber with the 3 primaries and black/white