How is the string attached to this clear piece of plastic?

How is each letter being "glued" to the surface?

That is done with a tambour needle. You can buy them at Amazon or craft stores. You punch a hole and do a chain stitch as you embroider.

As you've noted, the thread passes through holes in the plastic sheet. The process appears to mimic the mechanics of a sewing machine. A loop is pushed through the hole to the underside. Another thread is passed through the loop.

Looking up "hand stitching awl" presents a method likely to be used in the photo collection. This method uses a single thread, while a sewing machine uses a second thread in a bobbin located under the machine arm.

For this project, the loop is pushed to the underside of the sheet. The awl is removed and placed in the next hole. The new loop is then passed into the previous loop and tensioned.

The new loop becomes the previous loop for the next hole. 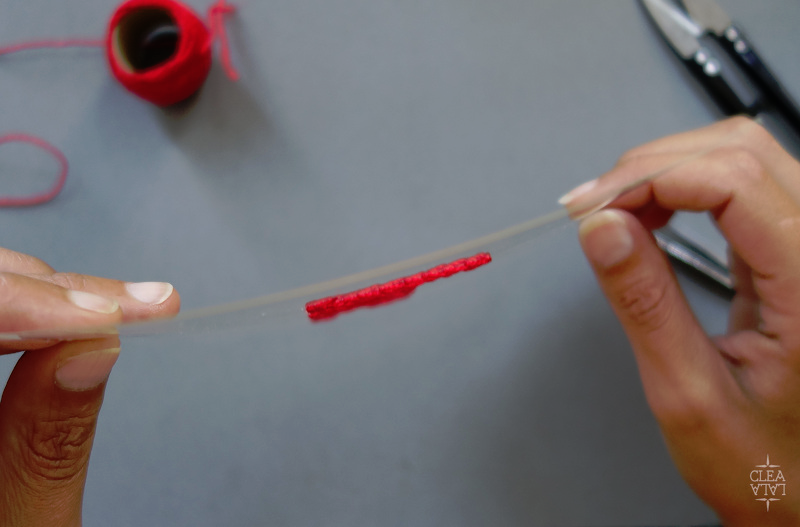 A YouTube video shows one method of connecting the loops, although there may be other methods possible.

This could be done using different embroidery techniques, just using a sturdy transparent sheet instead of fabric as the carrier medium.

The stitching looks a lot like chain stitch, which can be easily achieved with a simple crochet hook using the traditional Indian Aari technique. See a video with simple instructions here.

When embroidering fabric, you can simply push the hook through the fabric. In this case I suggest punching the holes through the sheet before embroidering, otherwise you might bend the sheet. A thick needle or awl heated over a candle should suffice to poke neat holes. Make sure you cover your working area with something disposable like old newspaper to avoid damage to your table top.

Not the answer you're looking for? Browse other questions tagged sewing embroidery or ask your own question.

8
How can I cover my desk chair's seat?
7
Can I use the potholder quilting technique to make a quilt out of t-shirts?
8
How to pick an embroidery machine
5
Topstitching the inside AND outside seam of pants
6
Sewing machine problem: machine won't tighten the loops under the material
2
What type of stitch is a perfect fit for elastic materials (as close as possible to Nike's sport gear for running)?
5
Are there cases where we do not reverse stitch when sewing?
6
How to Slow the Speed of a Sewing Machine
6
How can I secure the front and end of my hand-stitches without adding knot to needle, or back-stitching