What is the paper cutting art called which does not involve folding?

The paper cutting craft shown here - How to cut a tiny circle in paper? does not seem to be done by folding paper (there are no wrinkles). Doesn't seem to come under origami.

Since I wish to learn that kind of paper cutting art, I wish to know what is that craft called?

This may simply be called papercutting!

From Papercutting on Wikipedia:

Papercutting or paper cutting is the art of cutting paper designs. The art has evolved uniquely all over the world to adapt to different cultural styles.

Silhouette can refer to the art of cutting outlines or portraits out of black paper. [...] Contemporary papercutting is also sometimes associated with the art of stenciling, itself being derived from techniques used in graffiti art. The use of hand-cut stencils in graffiti art has received international attention in recent years due in part to the artist Banksy.

There is also more information on Chinese paper cutting, although I can't verify the accuracy of it:

"[L]ong before the paper was invented... people used thin materials, like leaves, silver foil, silk and even leather, to carve hollowed patterns for beauty. Later, when paper was invented, people realized that this material was easy to cut, store and discard. Thus paper became the major material for them to use, and people habitually called this artistry paper-cutting, or Jianzhi in Chinese."

Jewish paper cutting is a traditional form of Jewish folk art made by cutting figures and sentences in paper or parchment. It is connected with various customs and ceremonies, and associated with holidays and family life.

A couple of examples: 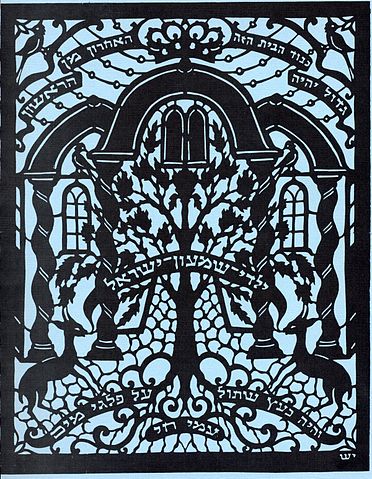 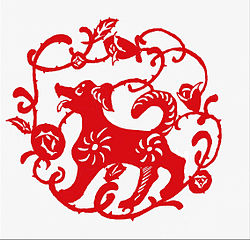 In the Japanese tradition, Origami is the art to fold (ori) paper (gami).

What you are looking for could be kirigami, the art to cut (kiri) paper.

I'm not 100% sure that kirigami is what you are looking for because kirigami, from what I know, usually involves folding the paper in two to achieve beautiful 3d images through cutting and folding paper.

You can search kirigami on google to get access to a lot of images, sites and video tutorials and how-to. I have done some kirigami projects in the past: you must be very careful on where you cut, but the results are amazing!

This is known by several names such as paper cutting, paper carving, folk cutting, Wycinanki(Polish), Schereneschnitte (In German meaning scissor cuts), and Knippen ( by the Dutch). In Japan Mon Kiri involves folding and cutting paper.

In 105CE Chinese invented paper like or simalar to what we call paper. It was considered a valued commodity and wasn't cut until around 600CE. By the 13th century paper cutting was done all around China. They kept the making of paper a secret until around 610CE when monks brought the know how to Japan. When it spread to the Middle East, Bagdad became the first place to build mills ( around 794CE). In the 11th century people in Turkey were cutting paper and by the 16th century they even had paper carver guilds. The Christian churh tried for centuries to boycott the use of paper because they thought Muslims were trying to take over trade and culture through paper. The Jewish living and trading alongside Muslims had easy access to paper and began paper cutting for religious and mystical reasons. In the 15th century when the printing press was invented the Christians changed their view bout paper. Turks and Egyptians sold paper to Europe. It was expensive at first and paper cutting was only done for religeous reasons then. Germans brought paper cutting to America in the late 17th century. So, paper cutting traveled from China to Asia, to Europe, and then to North America.

Amazon has some great books on paper cutting. I reccomend Creative Paper Cutting by Chong-Ah Hwang, Paper Cutting Book: Contemporary Artist, Timeless Crafts by Laura Heyenga, The Book of Paper Cutting by Chris Rich and Scherenschnitte by Susan Schlapfer-Geiser Their are many other books on the subject but, these are a good place to start.

Not the answer you're looking for? Browse other questions tagged papercutting .

42
How to cut a tiny circle in paper?