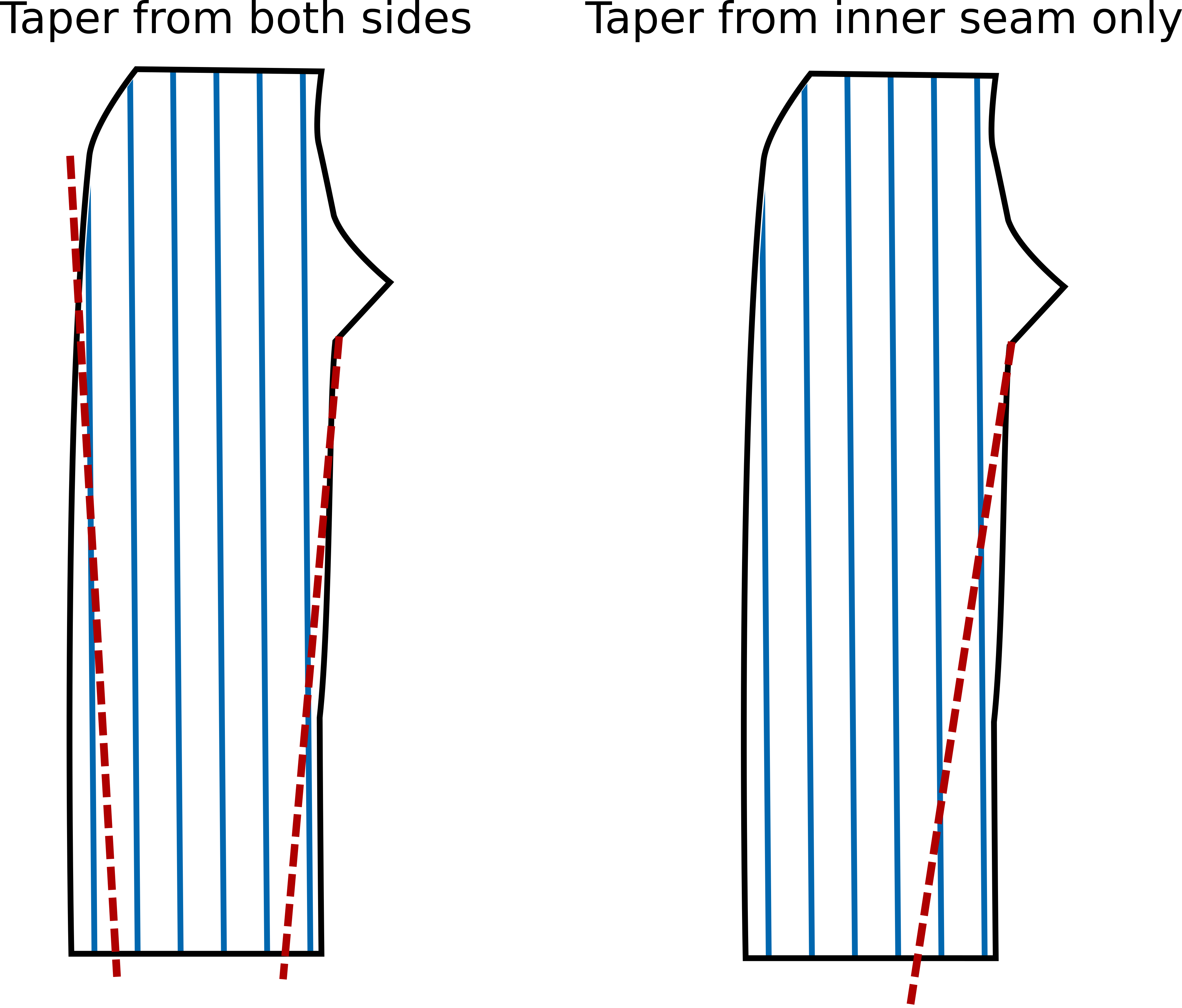 I am interested in modifying a straight-legged trousers pattern to achieve a more tapered look. I found a good resource for how to taper pants legs that includes tapering on both the outer and inner seam of the leg:

However, the fabric I am planning to use has prominent vertical stripes and I was wondering if it is possible to taper only on the inner seam so that the outer seam remains straight and cut along the grainline/ parallel to the stripes. This way you don't get intersecting stripes on the outside of the leg, which I think would look better.

Is it possible to do the tapering this way -- along the inner seam only -- or is there some big disadvantage I'm not seeing?

If the fabric is not very stretchy, you'll probably get a bad fit and lots of creases in the hips and crotch area.

Sewing patterns are designed to best fit a 2-dimensional piece of fabric around a 3-dimensional human body. If you make major changes like that, you'll have to expect that the result doesn't fit the "standard" human body anymore.

My guess is that the pants would act like this:

They would only fit well as long as you spread your legs. While standing straight, you have too much fabric at the outside seam, especially at the hips. That fabric has nowhere to go, so it starts creasing and bunching up. Since there isn't enough fabric on the inside seam, it pulls and constricts uncomfortably, especially while walking or sitting down.

One possible solution is to taper the pattern on both seams and align the grain with the outer seam. Be aware that this can also cause creases and pulling. It's recommended to keep the grain line as straight down the leg as possible

Another alternative that works astonishingly well is cutting the pant legs on the bias. This was done for some historical clothing, mainy for the wealthy (because you waste a lot of fabric that way). Woven fabric has some stretch along the bias, so cutting pant legs on the bias allows the fabric to stretch over the knees and the bum when moving and sitting down. Of course this would lead to many intersecting stripes, which actually looks better than just a few intersecting stripes.

Not the answer you're looking for? Browse other questions tagged sewing pattern-drafting or ask your own question.

7
Sew Hidden Seam
9
How can I trace a pattern from a top with darts?
7
Cuff strategy to maximize longevity of pants
5
Topstitching the inside AND outside seam of pants
6
Pattern for adding train tracks to a simple stockinette square?
1
Hem pants less expensively
1
Dressmaking and pattern layout: folded vs open fabric?
2
What is the following pattern called?
3
How I can design a skirt pattern without taking measurements?