Muslin as a curtain with the option to remove hooks

I just purchased some green screen muslin as a background for video editing, and am wondering how to best attach it to the wall. Both the wall and the green screen are 6m wide and 3m high. Most of the time I'd expect the screen to hang off the wall, but I'd like to be able to move it away (so it should be a curtain) and to take it off and use it in different settings as well.

My initial approach would be to punch a few metal eyelets through it at a reasonable distance from the top, and run curtain hooks with wheels through these, which would allow me to remove or replace the hooks if needed, but should still give me the necessary strength.

The cloth itself is rather light for its size, but I'd expect a bit of force when the curtain is drawn to the side (most of the force would be on the outermost hole then), or when someone stumbles into it (we're playing VR games in that room, so people are unable to see the wall unless they get near it and get a warning from the system).

Clips and dowels This is what I do. 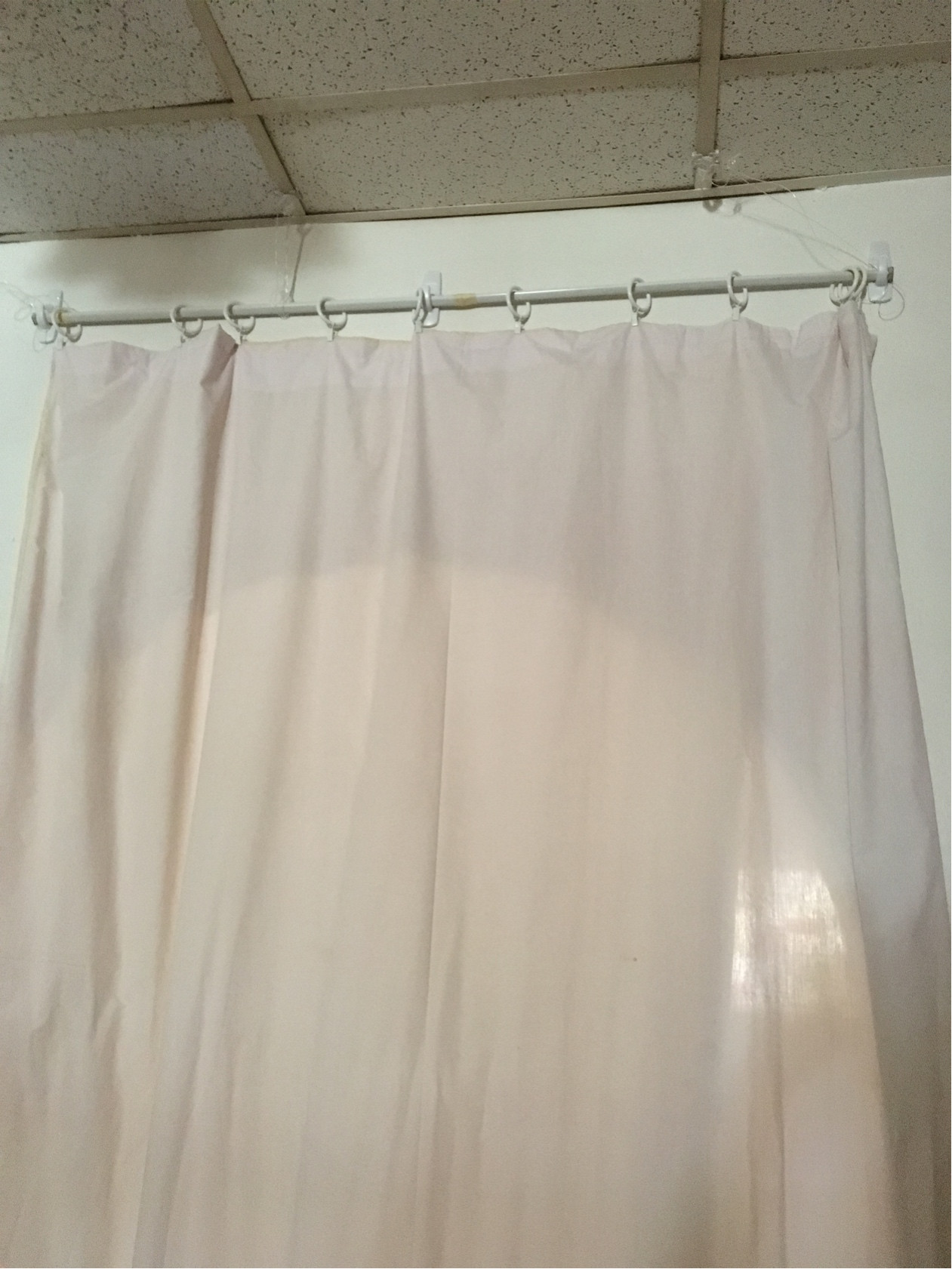 You see pink broadcloth and on the on the other side is standard muslin. Zoom into the top. You’ll see clips that you can purchase at a certain furniture box store or you can use binder clips from the stationary shop with shower curtain rings from a dollar store.

In this case I used a curtain rod that I hung with command hooks to the wall so that nothing makes permanent marks and it is completely removable. It ain’t perfect or pretty but it’s been working for years and I can make it nicer when there’s time. 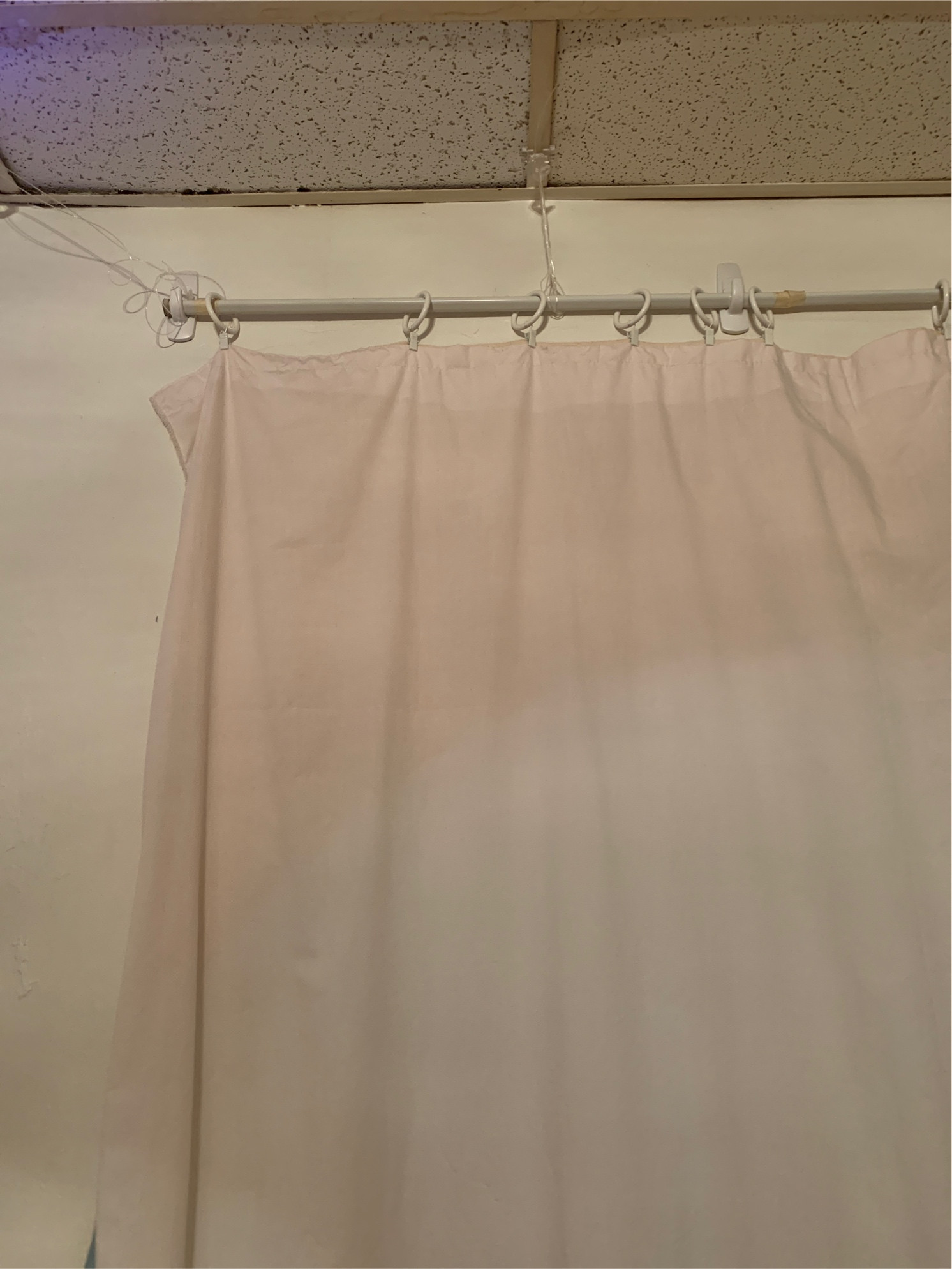 When I first put this up, it wasn’t stitched at all. Needed it fast. Then when I had time, did the sewing. 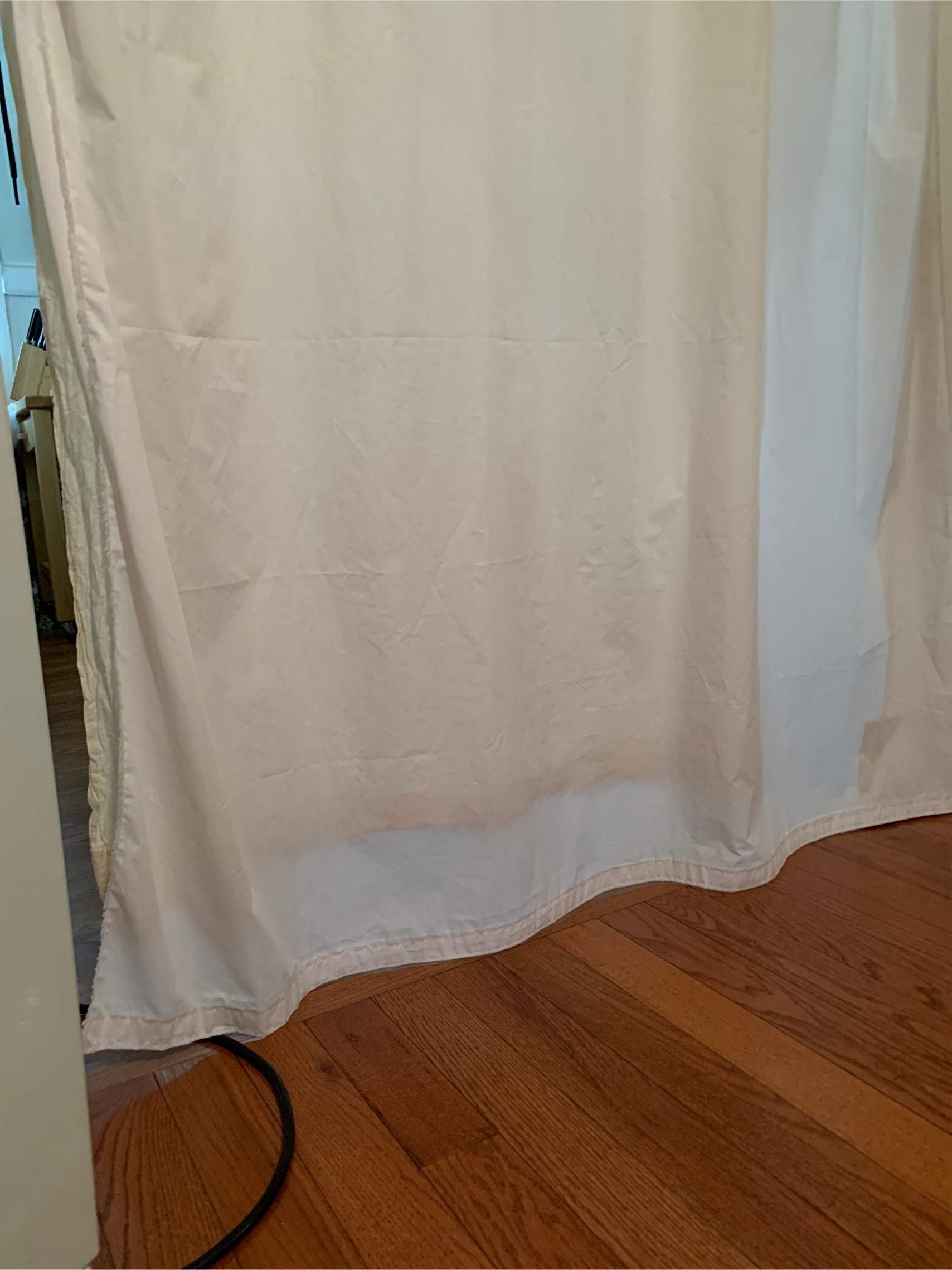 This is how it hangs. To tie it back, there is a shoelace pinned to it. You can be fancy and use a curtain swag. This is why there are wrinkles in the middle.

Here is another way I do this. 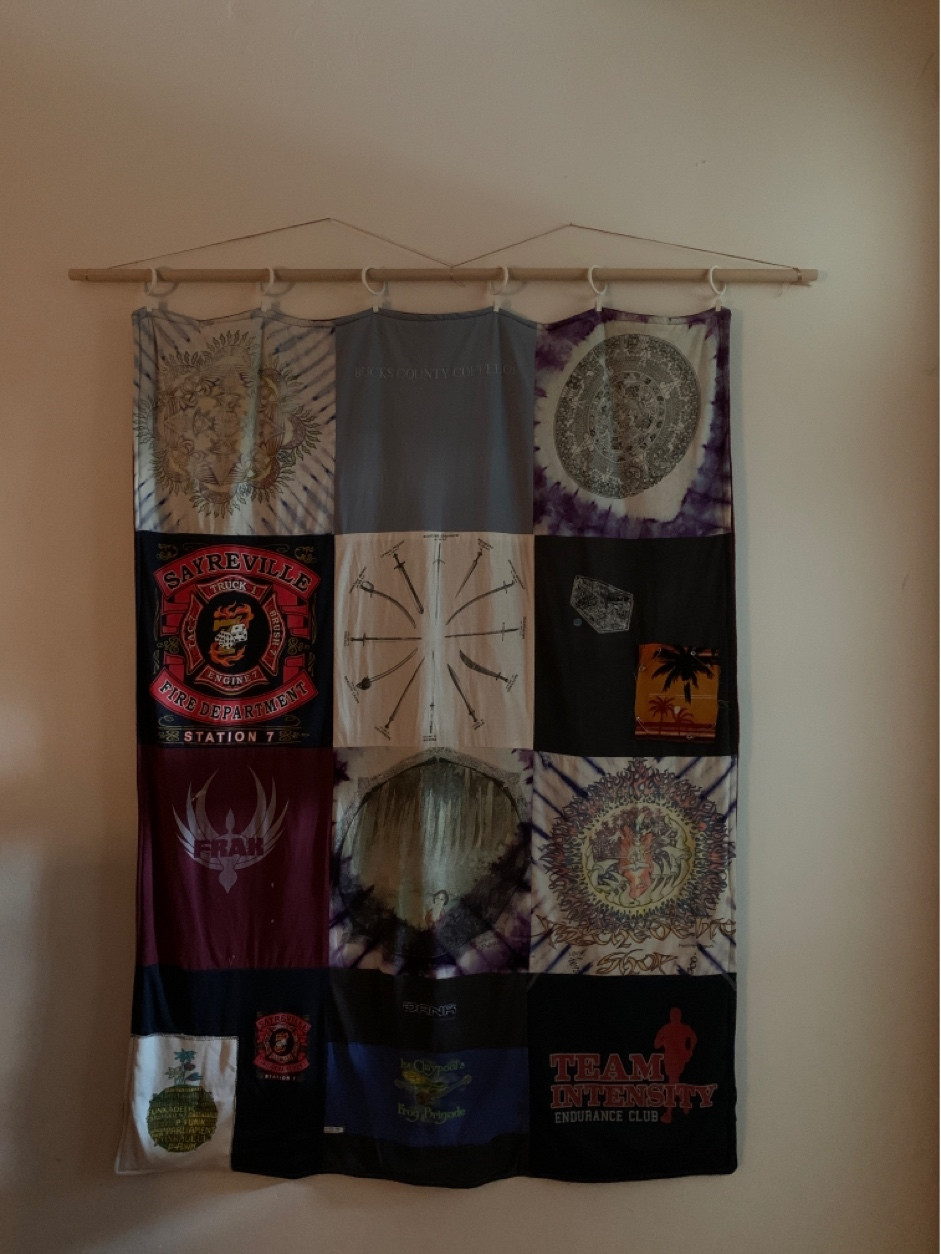 Nails and a dowel and string with the clips. 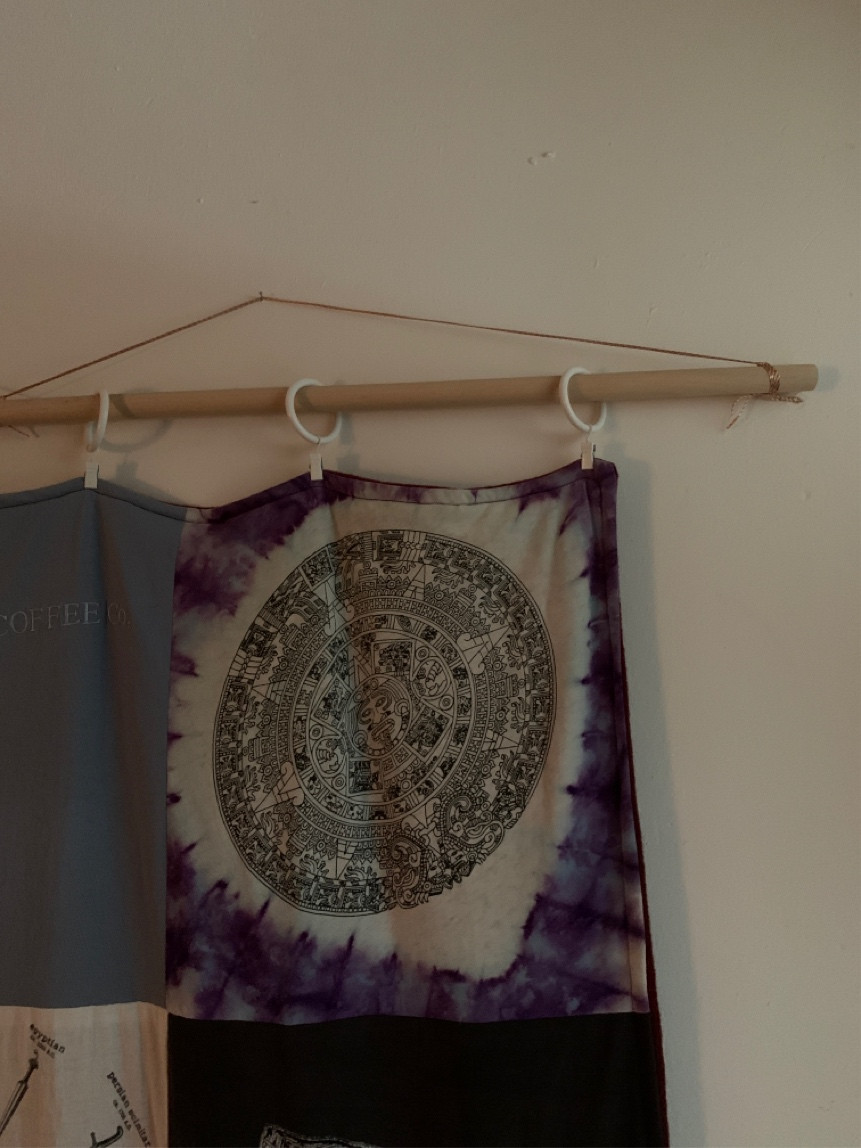 This piece is heavy so it hangs without help. But notice the weight stretches it.

Here are some considerations.

Eyelets sound like a viable solution, but I strongly advice against cutting holes for them. As soon as individual fibres are cut, the fabric will stretch far more under its own weight. In the worst case the eyelet hole could stretch bigger than the eyelet or rip.

A techniqie that is used in corset making involves eyelets without cutting fibres, a little force and lots of pacience.

If stretching the hole is easily done without force, your fabrig is too fragile and will continnue stretching. In that case your idea of doubling the top edge and interfacing it (as pointed out by csk) might help. You can also sew a narrow strip of sturdy material to the top edge and insert the eyelets into this strip instead of the curtain.

To ensure your greenscreen doesn't wave in the slightest breeze, you should put some lead hem curtain tape into the bottom edge. It's basically a string of lead beads, so keep the added weight for the eyelets and the curtain rail in mind. 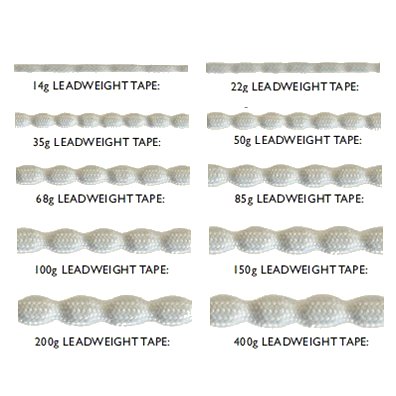 Another idea mentioned by csk is to insert a rod into the top and ideally the bottom of the curtain, but one long rod would make it difficult to move the curtain. I would suggest a series of even length rods instead, which would allow the curtain to fold like a folding ruler. You could take the curtain off one location, store it in a compact way and move it to another location. Being able to move it away like a proper curtain involves some careful thinking and placing the rods and eyelets in the proper positions. I'm also not sure if this could wrinkle the greenscreen and how much those wrinkles would interfere with greenscreen technology.

Not the answer you're looking for? Browse other questions tagged sewing .

6
What is the best way to attach backing on a quilt with irregular pattern?
3
How to sew this seam with a Brother 847 sewing machine?
4
What is the most effective stitch for fabric gloves?
5
How to sew a knit fabric with a straight stitch machine?
4
What is the name of this stitching pattern?
3
Curtains lined with the same material: where should I put the seam?
3
Is it a good idea to hand sew a denim pencil skirt with false cuts instead of using sewing machine?
5
When should I cut fabric with scissors, rotary cutter, or knife?
3
When do you serge with an open seam