What are the different pencil/pen holding techniques for drawing? Which should be followed in which case?

I have seen on Instagram that artists are able to draw curved lines which appear as if drawn by machines. I have also observed artists holding their pen in different ways than what is taught in schools.

Here the artist has covered the pen by their thumb in some way.

I want to know what are the ways of holding pencils/pens for drawing are, and also what kind of grip will result in what kind of drawing.

Please add pictures too for a better understanding.

It's mostly a matter of preference, but the way you hold a pen(cil) does influence the pressure, precision, range, and rotation.

Everyone develops a preferred way of holding a pen (often when learning to write), and as this grip is likely used the most, it usually is the most comfortable for that person. Because of this experience (training), this grip usually allows for the most control over whatever is being put to paper. Even if a person has two different grips for writing and drawing, both are likely developed sufficiently to allow for interchanging. Some people might resort to their 'writing grip' when adding detail or, vice versa, when sketching, depending on their handwriting.

Still - and this can become obvious when looking at pencil grips from a mechanical standpoint - the way one holds a pen(cil) has an effect on the pressure one can exert with the point, and the precision and range with which one can draw.
Finding the proper average for any specific task can increase the effectiveness of that technique.

A general rule is to adjust your grip to the shapes you have to put down.
As with many other tools, the pen(cil) will ideally be treated as an extension of your body, and the grip should adapt to what your mind dictates to be put to paper, becoming a natural and subconscious link in this mechanism. I think it's helpful to think about this while drawing, so you can become aware of what aspects could use extra attention.

The different aspects of drawing can be manipulated with these adjustments:

Two extreme examples of more common grips (when working horizontally) are the following:

There are a lot of grips between these extremes, and your default grip is likely an average.

Then there are some rarer grips and 'tweaks':

I suggest experimenting with these parameters and the angle with which you hold the pencil.
Ultimately, though, it is whatever you feel most comfortable with.

I just stumbled upon this drawing from Gerardus Mercator's Literarum latinarũ, quas italicas, cursorias- que vocãt, scribendarũ ratio, from 1549. It shows the 'proper' way to hold a pen when writing on maps: 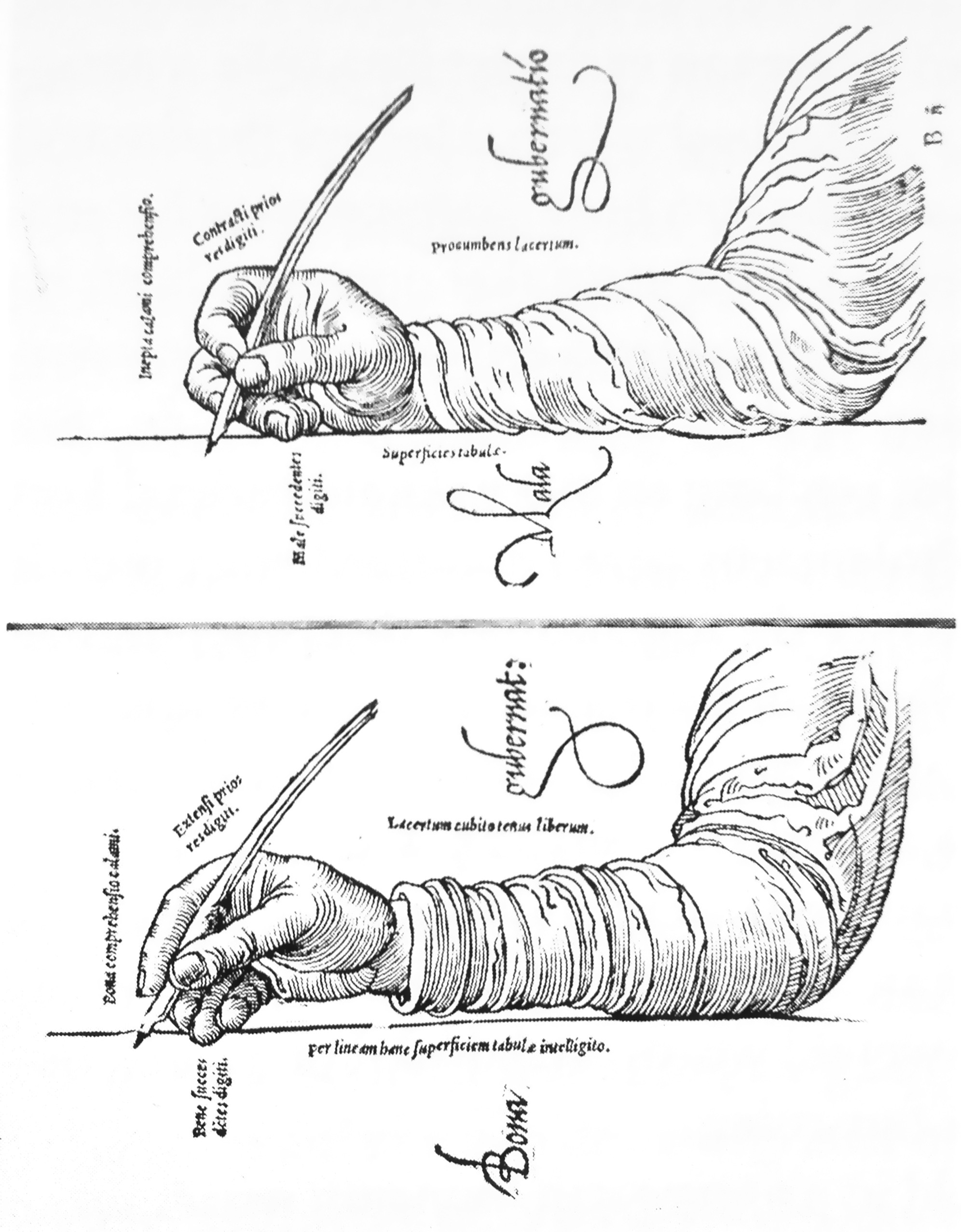 Not very helpful in regard to your question, but it gives it a little historical context :)

There is a previous discussion here: What exercises can I do to improve the line quality of my drawings?

Holding the pencil closer to the tip would also help more for finer detail, while holding it towards the middle of the pencil, would be for longer strokes.

Holding a pencil or pen in my own experience, the hand/fingers can start to get stiff/or arthritic over time. Finding myself holding the pencil differently (than we were taught in school) is for comfort, more than a specific effect.

For an adult with fully-developed motor skills, the holding technique that's best for you for a specific application will largely come naturally. Some muscles are stronger than others, some joints are more flexible than others, and some positions trade off fine control vs. strength and stamina. For extremely fine detail, you can manipulate the point of the instrument mostly with your fingertips and a little wrist motion. For filling a large area, you will naturally rely more on your arm muscles.

If you engage in the activity often and for prolonged periods, you will build up strength, stamina, and coordination in the muscles you use, and your body will naturally adapt and improve as you practice. As you get older and develop conditions like arthritis that interfere with optimum techniques, your body will compensate to rely more on other joints and muscles.

People can learn to use almost any technique with enough practice. If you watch the brush technique of some Japanese artists, it's amazing that they are able to get paint or ink even close to where they want it because it would be hard to invent a worse technique from a bio-mechanics perspective. And yet, with lots of practice, they are able to accomplish some amazing control.

Generally, you will have better control if you use a position that is comfortable for you and allows you relax muscles that aren't necessary to the activity as much as possible. There are a few "tricks", like drawing a more uniform curve by emulating a compass with your hand and anchoring part of your hand as the center. That will get you to a nice curve faster than developing the coordination and skill to do it freehand.

Once you've gone as far as you can using the techniques that come naturally, you might be able to improve your control with an adjustment to the technique and practice with it. But holding a drawing instrument isn't like learning to use chopsticks, where a special hand position is required for it to work at all. The impressive results you see from experienced artists aren't due much to the specific holding technique. It's due mostly to skill developed through a lot of practice.

Not the answer you're looking for? Browse other questions tagged drawing technique-identification pencils pens or ask your own question.

11
Do I need to hold the pencil in different ways for different kinds of shading methods?
3
What exercises can I do to improve the line quality of my drawings?
2
How to hold a thin grip pen?

7
What are the different kinds of erasers used in graphite drawing?
9
Which kind of pencils should be used by a beginner for drawing?
6
What is the term for drawing wireframes which are drawn before drawing the actual object?
1
When drawing shapes made from overlapping spheres, how should I draw the lines that indicate curvature near the intersection?
2
What are the technical terms/techniques involved in sewing “paper bag” like bags?
5
What are dry inks and dry pens?
3
Is there a single “best” position for holding a fountain pen while writing?
6
How should a child first learn to draw?