How much fabric is needed in this instructional?

My wife comes and asks me whether or not she has enough fabric to complete a project. She gives me a square footage of what we have on hand and then a yardage — not square yardage — called for by the instructions: 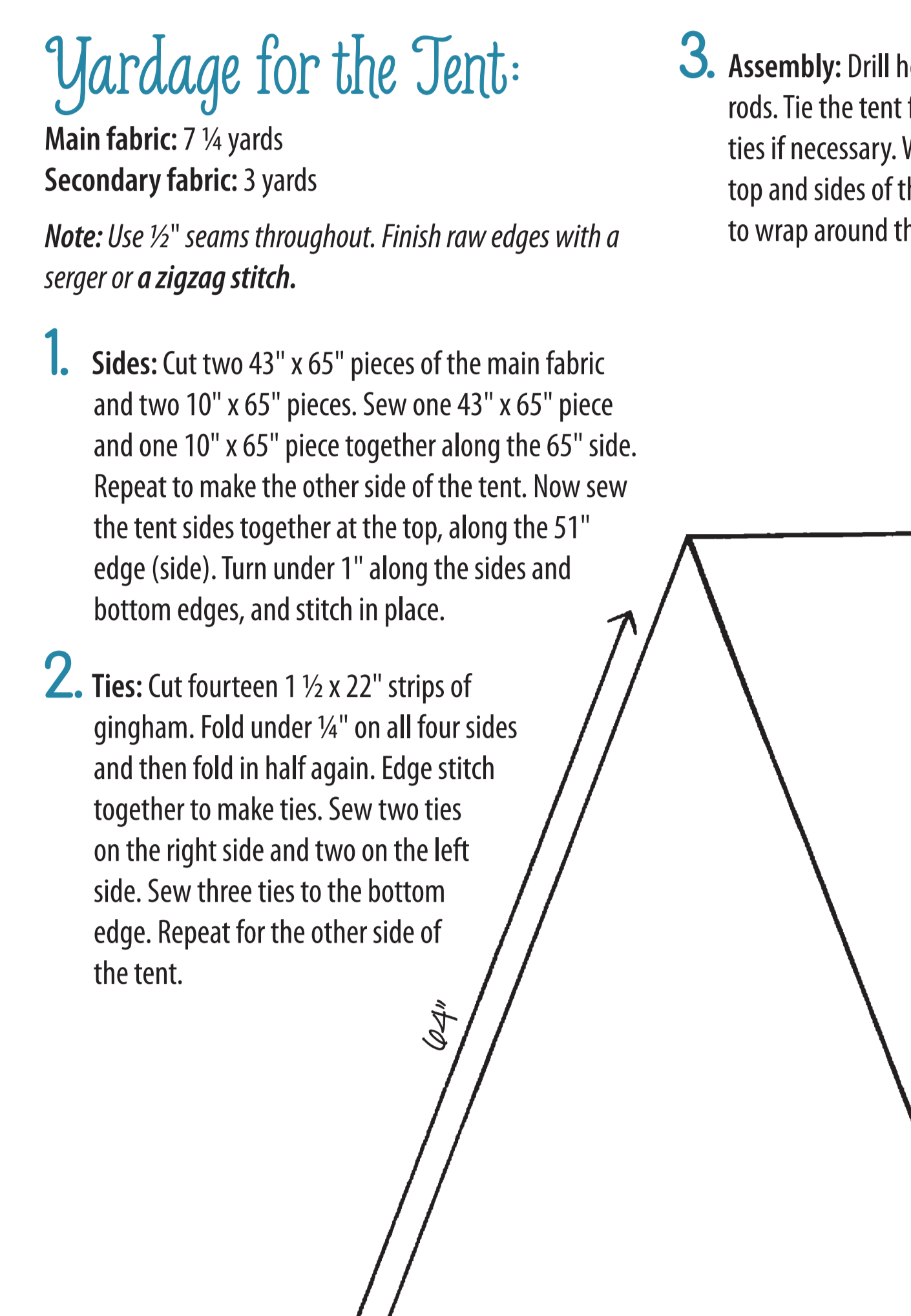 I double check just in case, but nowhere does it state a width on the page. So then I think to myself, "there must be some standard width then, that's common or universal to textiles?", except a Google search later my conjecture is unceremoniously debunked.

Is the author going senile or is there some secret trick to converting one-dimensional units into two that only the textile industry is privy to?

The instructions you've posted call for "two 43" x 65" pieces of fabric." While there are a wide variation of fabric widths available, the standard US widths are (approximately) 45" and 60". As this piece easily fits into a length of 45" fabric (which is often actually closer to 43"), it stands to reason that the pattern is calling for the more common 45" width.

Therefore, you need the called-for 7 1/4 yards of 45" fabric, in an appropriate material (heavy for outdoor use, any for an indoor play tent).

Note that you could also purchase 60" fabric for this project, but you'll have more left over than if you used 45" fabric; patterns that can use either size typically won't call out the width specifically, or will give different yardages for both. Patterns calling for 60" fabric specifically will be explicit about the width, as these patterns generally include pieces that won't fit easily or at all on a 45" wide piece of fabric.

I just returned from the JOANN Fabrics and Crafts web site. A search of "fabric" resulted in hundreds of returns, no surprise there. What was a surprise was a "standard" width is not standard. I found material as narrow as 19" and as wide as 72". This reference is USA only, as I don't know if standards in the countries using the metric system will be different.

What you'd have to do in the case of this project is determine the narrowest bolt that will fit the widest part of your cuts. Obviously if you have a part that is only 40" in one dimension and much longer in the other, you'd be able to cut it from a 48" bolt.

A tent implies rugged use, unless it's an inside play type tent. You should be able to identify "common" but not standard widths for bolts of your choice of material and do a bit of math to determine the necessary quantity.

I agree that it would have been useful to have a width reference in the instructions.

The width of fabric is usually measured in inches (in US) and most common widths are 44/45 inches and 60 inches. The width varies by the type of fabric. Quilting cotton is almost always 44/45” wide, apparel fabric is most often between 44” and 60” and home decor fabric is usually 54”.

This is an indoor play tent, so it is likely that is what they are assuming you would use. That gives you exactly the material needed to make the 4 panels.

Not the answer you're looking for? Browse other questions tagged fabric measurements .

6
How much thread do I need when cross-stitching a pattern?
4
can you identify this fabric
6
What's the name of this type of fabric pattern?
1
How much concrete to order?
1
Fade color in fabric
5
Estimating the amount of wool stuffing needed for a project
1
What sort of fabric could be used for this costume?
2
How I can calculate how much fabric I need to buy?
3
How is this fabric stretched without folds?