Does anyone know how to reset the timing on a Singer 7466?

It lost timing the other day while my wife was trying to sew fabric too thick for the machine. After that the needle was coming down at the wrong time and would impact the bottom of the spinning bobbin holder (sorry I don't know what it's called haha) instead of coming down into the groove. And of course it wouldn't thread a stitch either.

However, the computer didn't like that. It would only make it to the point where it actuates the dog feed, act like it's bound up, then start beeping and flashing. I think it's actuating the dog feed at the wrong time. And it looks like that's actuated based on optical sensors on the top shaft.

Ok, I figured no problem. I could put the lower bobbin thingy back in exactly the same spot it was before and look for lost timing somewhere else. Maybe the timing belt running down to the bottom shaft had skipped a tooth or something. And I figured I could put the bobbin back in exactly the same wrong spot it was before by going off of the marks the needle had scraped into it. All I had to do was take it apart again, loosen those grub screws, turn the wheel with one hand while holding the bobbin with the other, and...

That's when I noticed that the entire lower shaft was slipping at the toothed pulley! 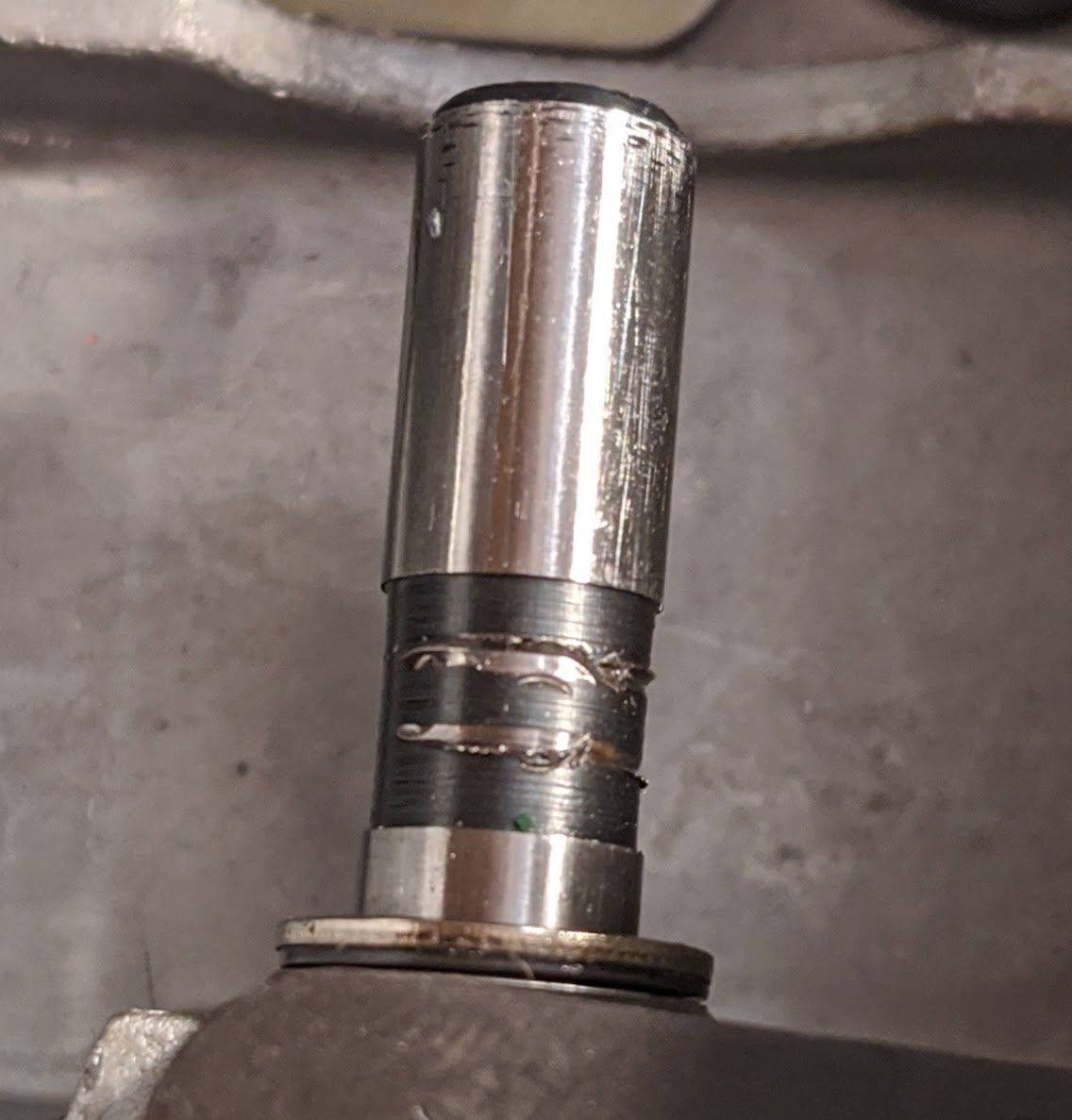 See how the grub screws on that end have chewed it up? Because of that the whole bottom shaft can rotate almost 180* out of sync. Now, if I had noticed this before I messed with the alignment on the other end then this would be an easy fix: I could just loosen this pulley a little, rotate things back into line, and tighten the screws on this pulley really tight (and maybe braze them so this doesn't happen again haha).

But I now have absolutely no reference for putting everything on the lower shaft back in line. I can't use the needle vs bobbin as a reference because I changed that, and I can't put the bobbin back because I need this as a reference. A catch 22.

I tried emailing Singer but they weren't very helpful. Here's what they said after I explained my situation to them:

Unfortunately, I do not have any information where you can find technical or parts manuals.

Service Manuals are not available, they are designated for the Singer Dealers and their Service Technicians that work on the machines.

We are not able to provide timing information for your machine. You would need special tools and gauges that are required to repair timing. Settings vary from one machine to the other and in many cases the technician simply knows when everything has been timed just right.

It sounds like they don't want me joining their club. Magic tools, secret knowledge, exclusive access, way too complicated to bother explaining... give me a break!

I fixed it after studying it a bit longer. Here's how:

First, I noticed that the dog feed makes these four basic motions over and over:

Second, my wife clued me in to the fact that the dog feed should not move the fabric while the needle is down.

Now, these two things are probably very obvious to everyone on this site, but not to someone like me with very little exposure to sewing!

I loosened the relevant parts so I could freely spin the bottom shaft independent of the top shaft. Then armed with the above two pieces of information, I put the needle at top dead center and the dog feed at the threshold between its motions #1 and #2. Then I tightened things down so that the top and bottom shafts were locked together again. I spun the hand wheel to confirm the needle was never down during the entire duration of the dog feed's motion #2. That put the needle in time with the dog feed.

A quick test with power applied confirmed the machine was happy enough with my timing. I reassembled everything, got my wife to teach me how to thread things up, then impressed her with a working straight stitch! It sews a straight stitch forward and backward just fine.

The machine also needed the dog feed to be realigned a little bit because it was impacting the plate, but that's not really relevant to what we're talking about here.

Unfortunately I didn't see any timing marks anywhere. Had there been timing marks I would have tried to make sense of and use them. Also, while the gouge marks in my picture would have made it possible to tell exactly where the pulley had been before it slipped (thanks for that idea, @fixer1234!), that knowledge would not have helped because I had already taken off the timing belt between the top and bottom shafts--doh!

Disclaimer: neither my wife nor I have any idea if the machine is correctly doing any of the fancy stitches, because neither of us really know how what they're supposed to look like lol! All I can say is the machine didn't lock up or catch on fire when I tried a zig zag pattern. All it did was pull the fabric together which might be normal, or maybe the tension was wrong?

3
How do I fix upper thread tension being too high?
4
Raising the bobbin thread doesn't work
5
Sewing machine problem: machine won't tighten the loops under the material
5
What needle depth should I set to prevent the machinery from hitting the needle?
4
What could be causing my sewing machine (Singer 3223) to be sewing zig zag rather than straight?
2
Cleaning and oiling a Singer 3002
6
Do I have to lower the foot and needle when my sewing machine is not in use?