How can I tie a tight knot?

I'm working on making some chimes, which involves tying a (tuned) piece of metal to a piece of wood fairly tightly - ideally, so that there is always a gentle force pulling the chime together with the wood. For context, here are two pictures of the setup, one from the top and one from the end: 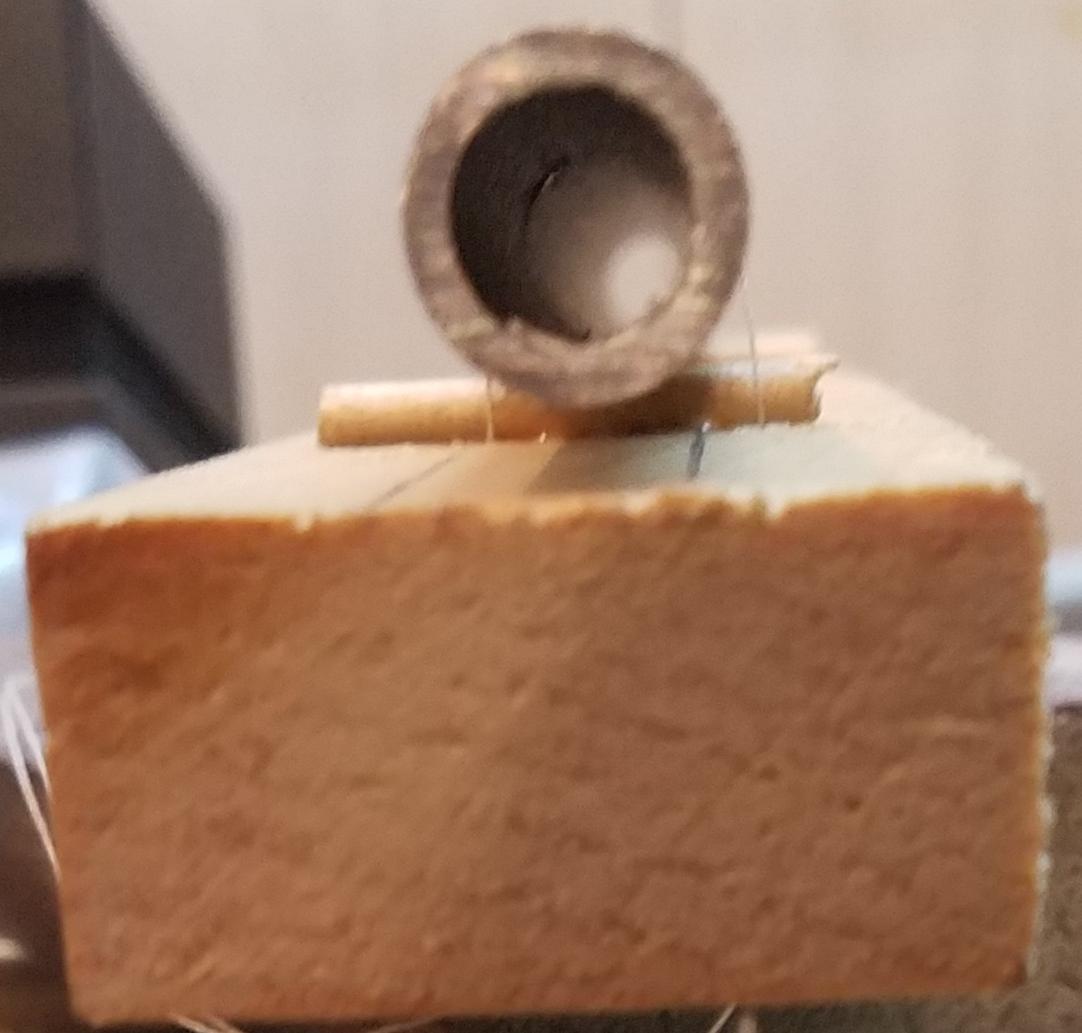 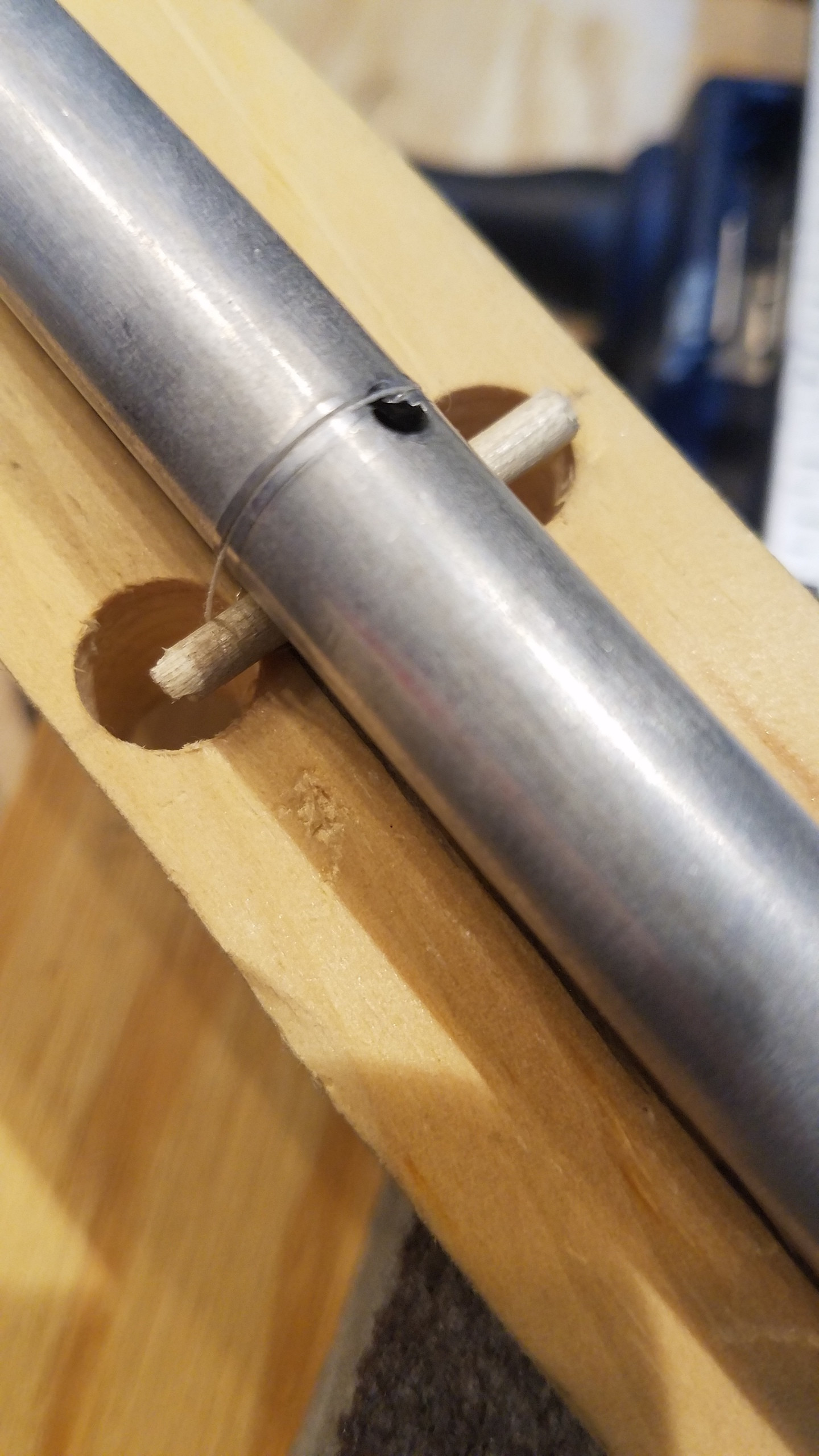 (Ignore the holes in the aluminum; they are from an earlier, less successful experiment.)

The string passes through the holes to the side of the tube, and loops around the tube itself on top and is tied underneath the wood. The knot needs to be tight because, if it is not, the tube can jump around when hit with a mallet (which is bad) and the vibrations of the tube can create buzzing against the wood (which is also bad). This design seems to yield really good results when I test it out while holding the strings taught prior to tying them, but it doesn't work very well when I tie the knot. (Also, since it's probably important: I've been using overhand knots to make the loops of string - it's the only knot I'm familiar with, so I would be satisfied with an answer that points towards a more appropriate knot to use, if that's the problem)

Is there some technique I can use to ensure that a loop of string stays under tension after I tie it into a knot?

Your other answer, from @fred_dot_u, is probably the way to go but for completeness, here are a few other ideas.

First, a single overhand knot won't hold. If you combine two, make sure to combine them into a reef knot (or square knot) and not a granny knot, which is likely to loosen under vibration. A reef knot or even a shoelace knot is adequate here.

If, even by holding down the first half knot, you still can't get it tight enough, you can use a wedge on the back, or put a dowel through the back, twist it to give the desired tension, and fix it in place with a small nail. These methods allow you to adjust the tension. I suspect you need to get the tension within a reasonable range, so the damping of the ringing chime is consistent between notes.

Lastly, thin steel wire can be used, twisted on the back of the workpiece. This is easy to do, and can look quite nice.

As you know, the vibration of the chime is what causes the sound. Within that vibration are peaks and troughs of vibration, but there are also nodes where the vibration is barely, if at all, noticeable. If you don't tie down the chime at exactly one of these nodes, you'll attenuate your sound and cause buzzing anyway.

Instead of tying your chimes, think about laying them in a way that makes them act like you want without the problems you don't want. This, believe it or not, has been figured out by makers of xylophones and marimba.

For example, a xylophones has lots of tuned steel slats that are struck by mallets, just like you want to do with chimes. They do bounce a little, but that's addressed by having a hole in one or both ends and a pin loosely in the hole preventing it from moving in an undesirable way. These slats are also resting on felt or other cloth risers at their nodes to prevent buzzing and damage from striking too hard & bounces. (I've left the image large so the cloth strips can be easily seen.)

Also, most chimes for music are held in place by either loose cords or a rod. Granted, these are also generally vertically mounted, but it's something to think about, since you are going the opposite direction in that you want to tie them securely down. 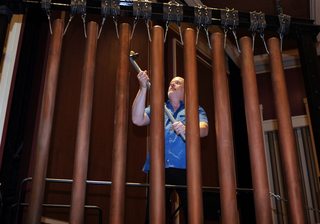 I'm not recommending a product or website, but if you look at how someone else makes something similar, you'll notice that the chimes appear to not be held down at all. It would be interesting to look at this from the ends of the chimes to see if there's a cord running across the tubes, but just hidden. The supports here look like rubber to prevent buzzing.

On the other hand, a single chime seems to be supported and held down by the same attachment device. It's a bad pic, but the support looks like a rubber O-ring, also presumably to prevent buzzing.

Rather than use a knot, you would want to make use of a taut line hitch, sometimes called a trucker's hitch. It's a series of loops which allow you to snug the free end, while the tension causes the loops composing the hitch to lock down onto the line.

There are many variations of taut line hitches but I've found that the trucker's hitch is consistent construction.

A relatively well written Instructable covers all of the aspects of a taut line hitch, although step four shows the most relevant portion for your objective.

For your purposes, you'd be condensing much of the length and consolidating the loops closer together. You might also be able to get away without the three loops around the free end of the cord, by tensioning the primary cord around your tube and using a simple half-hitch to secure it.

The three loops and length of line is more to allow adjustment and release, aspects you don't require.

Photo below obviously courtesy of netknots.com: 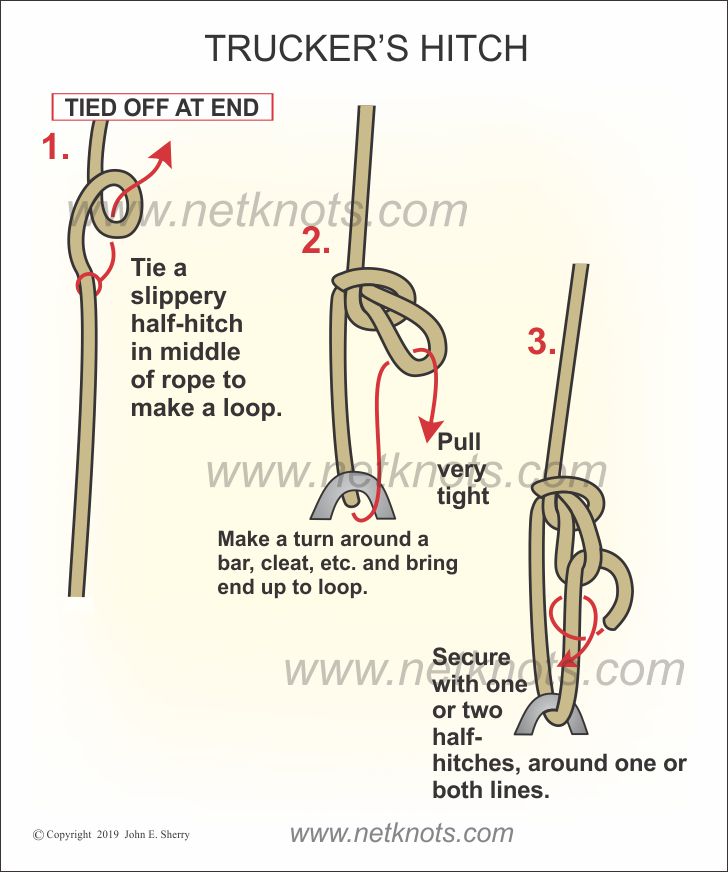 In this image, the "tied off at end" portion should be a loop into which the "make a turn around" portion will pass.

You can apply sufficient force and expect it to remain secure until the line stretches. A spectra based line will have minimal stretch and although quite slippery, takes well to this type of hitch.

Most natural fibres shrink as they dry, so you could try giving the cord a good soak before putting it on. That won't work if it's going to be left out in the rain, though. Otherwise I like the hidden wedge as suggested by Chris H.

If you use a slightly stretchy cord (nylon monofil as in your picture will do) you can pull the knot really tight so the cord is pre-stretched and use a non-slipping knot as others have described. That way as the wood gives a bit under the metal tube the line will still stay taut.

Were you to use a very inelastic cord (a wire) then changes as the wood dried out / as the tube bedded into the wood a little / as the cord bedded into the backboard as it went through the holes would mean the cord would become a little slack. You could compensate for that by tying the wire at he back over a chunk of something elastic (a piece of rubber for example) or by including a wedge at the back that you could tap in place to tighten the cordage.

The most basic way of doing this is with a square lashing.

However tightly you pull the string with a knot, it will always be slightly loose. The key part of a lashing is the "frapping turns" (steps 7 and 8 in the link above) so that the string is completely locked down onto the pole and tube.

The string from the square lashing will tie over the resonant side of the chime though, which may cause some unwanted damping. Using a diagonal lashing instead is likely to be the best solution, with the resonant tube being the front pole. Personally I also think that lashing looks prettier, which could be a factor for a musical instrument By the way, that picture is a bad example of how to tie off the cord after the frapping turns - you want it tied to the back pole instead of the front pole. I'm sure you can tidy that up though.

8
How to knot an elastic cord into a circle?
8
How do I evenly space my knots for my hanging craft project?
9
How do I join polyester tubular yarn skeins together?
2
How can I precisely and quickly tie loops of line?
1
Is this the 'Weaver's Knot'?