How can I facilitate spray-painting a long text on a wall?

I am hoping to paint ~200 words on a big graffiti wall in my town. The wall is on a pretty busy street, so I was hoping to do something like stenciling the paragraph on a big piece of paper and then cutting out the words, taping piece of paper with the cut-out words up to the wall, and then spray-painting over the piece of paper to get the text on the wall. That way, I could front-load the work at home and not have to spend too long painting out on the street.

But, this seems like a fair bit of work, and I also feel like the words might come out smudged if I paint the wall this way.

Any advice on how to best paint about 200 words on a wall?

I believe your method is sound if you take a few trivial precautions during the painting. You can avoid blurred and/or smudged lettering by ensuring the stencil is fastened well to the surface.

Consider to provide additional holes closely spaced to the letters. Applying masking tape through the holes will keep the edges of the stencil tight to the surface, but will not add much to your labor efforts. Obviously, you'll want additional masking (stencil area) well outbound of the lettering and lettering support holes, to keep overspray clear of the background.

The material you use for your stencil will be important too. Avoid absorbent paper material and shoot for something like butcher paper, which is often waterproof to a degree.

As with any spray paint application, multiple light coats will prevent runs/drips and result in a better image.

On the high tech end, there was a Kickstarter campaign called SprayPrinter, which converted an ordinary spray paint can to a phone-controlled dot-matrix printer based on an image provided to the phone. Version one was relatively low resolution, 320 pixels square, while v2 increased that, but I've discovered that neither version appears to be available at a retail level. 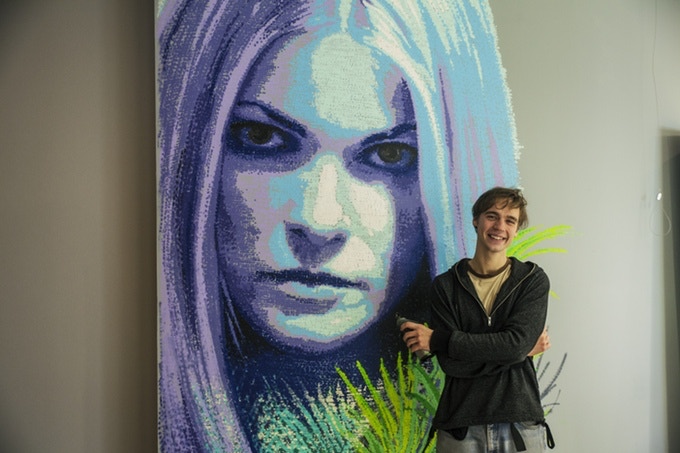 I'm not sure how well a text job would appear, although one can easily pixel convert text to old-style dot-matrix printing level!

Not the answer you're looking for? Browse other questions tagged painting graffiti or ask your own question.

9
For how long can oil paint be worked into?
5
How can I prep a pumpkin for painting?
6
Painting Clear Gesso Over Acrylics or Spray Paint - is clear gesso really clear?
2
How to protect/seal frosted glass spray
4
How to avoid painting SD card pins
4
Wall art sizing - how to convert between inch and cm?
2
Spray-painting polystyrene for outdoor use
6
How to hang a painting on plywood on the wall?
5
Types of paint safe for children to make handprints out of, on canvas
3
Is it possible to paint an oblique (perspective) anamorphic illusion on a three dimensional surface viewable from all angles as you pass it?