Making a diaphragm spring out of sheet metal

I want to make a relativelly small diaphragm spring for a project of mine. I'm thinking somewhere around 50-70 mm diameter, I can size the other parts to match the spring. 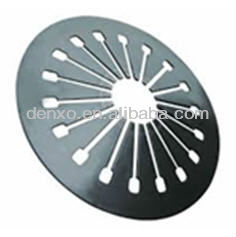 It's basically just a cone with some cutouts.

I have a sheet of material that I've been told is Phosphor bronze. I've measured it and it appears to be 0.2mm thick. According to Wikipedia

Which makes me think this could work. The problem is I don't really know how to work this material. In particular, I need to turn it from a flat piece into a cone and most likely add some reinforcement pieces to the 'fingers', though I could probably make do with bolting those on.

So the main question is: How do I go about turning a flat sheet into a cone? Do I stretch it somehow? Or should I make a circular cutout and join the edges somehow? Do note that I don't a lot of force from the spring. Worst case I'll make several and put them together.

In terms of tools I'm decently capable with a soldering iron (soft soldering) and have access to a drill that has an attachment that is meant to make it usable as a primitive lathe. Those are all that seem relevant right now.

Now, to avoid the XY problem, I shall describe the X as well.

I want to make a small model of a manual automotive clutch for myself. The key piece that I've been unable to get is the spring. Thing is, I want one that is way smaller than the ones in cars and those that are sold at that size are mostly gonna be way too strong for my application, as they are made for strength, not for looks.

I don't mind if what I make is weak, it's not meant to transfer power, it's meant to look realistic and that is my end goal.

This is a little speculative as I haven't tried it with phosphor bronze, or anything as thin as you got.

First cut a circular piece, and clamp it between 2 rings. A holesaw and scrap plywood (to support it and to make the rings) may be helpful here, but you don't yet want a big hole in the middle of the workpiece. Mark the centre accurately, a set of equally-spaced radial lines (I suggest 12), and a circle a little smaller than the inner diameter of your clamp rings.

Then beat or even press it into a conical shape, using a round-ended tool in the middle (maybe even the blunt end of an old drill bit). You should have a cone with a slight brim round the edge.

Now drill out the centre hole (using a step drill or cone drill would be best). This is already a spring, but perhaps rather too stiff - this is a good time to test. Cut along 3 of the 12 lines (equally spaced) and test again. If it's too stiff, cut along another 3 lines so every other line is cut, test again, and if necessary cut the last 6 lines. For the cutting, I'd use a hacksaw with something supporting the workpiece, as you want to remove a little material. You might be able to use tin snips and make two parallel cuts (my tin snips are heavy duty and not fine enough for this).

If you want it to be flat around the centre hole, instead of using a round-ended tool, drill a small hole and use that to clamp discs front an back, then apply pressure to the discs.

The important bit is to keep everything concentric - you'll probably spent more time jigging than actually making the part.

Not the answer you're looking for? Browse other questions tagged metalworking or ask your own question.

2
What size saw blade should I look into for cutting letters out of a 1/32" sheet of metal (I think steel) with a saw
7
How to create a metal ring?
7
Pliers for chainmail that don't scratch the the rings
5
Why are longer sheet metal screws snapping on installation?
3
Which steels are most suitable for knife making?
5
creating something like an expanding ring mandrel for my homemade lathe
5
What is a castable gold-coloured metal that is less expensive than gold?
2
Weatherproofing metal
2
Kiln elements keep burning out
4
How to Bend Metal Rod to Make a Perch

// TODO sg: TMP solution until we are confident in our current implementation of async imports // once we are, we can move the if into the js entry file and dynamically load the mark obsolete module