What does it mean to "push your values"?

When I used to frequent art-critique forums, I would often hear senior artists advise people to "push values", generally with little to no explanation beyond that. I gathered that in many cases it meant to make darks darker, but that's as far as I got.

What does this phrase mean in a drawing/painting context?

If there isn't enough separation in the levels of the values used in rendering an image then the image can look washed out or the shapes poorly defined.

Someone saying, you need to "push the values", means they think you need to add more separation in the value levels you used to define your shapes and areas in the image as a way to help build greater depth, contrast and image intensity. 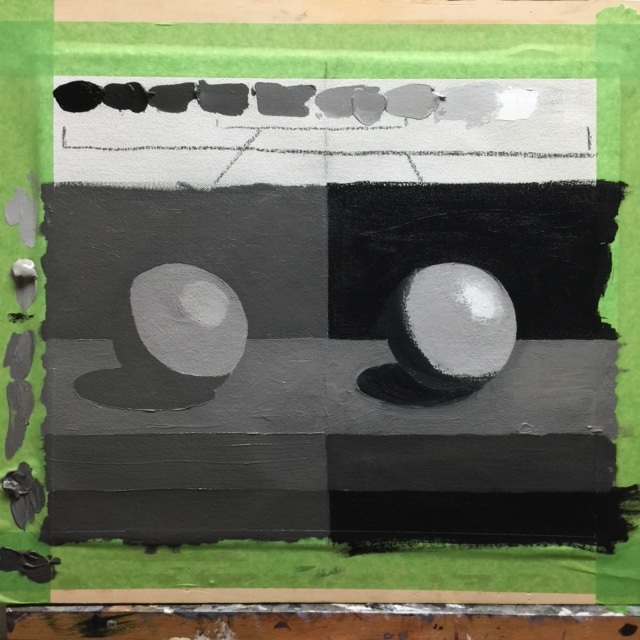 In the image on the left I limited myself to use values only from the middle range of the value scale (N4 to N7). The image looks hazy as though looking through a fog. I squeezed my values into too tight of a range for the scene.

For the image on the right I expanded the range and pulled from a broader overall range of the value scale. I pushed areas that were originally at N4 to now be at N1. At the other end where I had used N7 i pushed those areas to N10.

In both images N5 was used to render the table top. I used this value as my anchor point. Squeezing and pushing around it.

It means to build up the painting from black and white values, this helps create shape and depth. This is related to How to best judge grey values for paintings?

There are many sites on this; like “Learning to Design with Value”

Once a painting is done you can adjust values using glazes to modify a layer. That is what is meant by critics about pushing values; expend the value range. Apart from making things darker and lighter it is also essential to have a temperature range by contrasting warm and cool shades.

Our eyes can see a vast range of values from the brightest light of looking into the direction of the sun on a clear summer day to the deepest darkest black of and underground cave. But there is no paint dark enough or light enough to reproduce those values in a painting/drawing. So to make a drawing/painting as realistic as possible it is necessary to 'push' the values to the limits. So it means to make the darks darker and the lights lighter.

In the context of composition it is better to keep the shadows and the lights separate, when you push your values it will improve the 3D look of your artwork.

9
What's the term for the opposite drawing style to hyperrealism?
7
Dim lighting with colored pencils
4
How to best judge grey values for paintings?
1
Is there such thing as squeezing your values?

3
On what factors does choosing pencil shading technique depend?
4
How to best judge grey values for paintings?
9
What does "for finished artwork" mean?
6
What is the term for drawing wireframes which are drawn before drawing the actual object?
5
How to determine the "correct" scale for your art project?
5
What does a pigment's richness refer to?
7
What do 'woolen spun' and 'worsted spun' mean?
3
Does anyone know how to add color to a piece of art (paint, ink, art)
1
Is there such thing as squeezing your values?
4
What does the gesture in art of the finger pointing upwards mean?