So, I bought a medium kiln on craigslist for $100. It was old, and my friend and I wanted to upgrade it, so we bought some new heating elements, removed the entire controller-box, bought a temperature controller and a bunch of wiring. We only kinda know what we're doing - I took a sculpture class back in college, but that's it, and my friend has never used a kiln. We replaced the elements and connected them in parallel to ~220VAC. (We had some problems with the temp controller and the connected relay, but that's a different issue, and less important.) It worked for a few minutes; but then an element burnt out. Fast forward a few months, and we tried again with just the other two elements. The kiln lasted longer, maybe 30-60 min, but then another element burnt out. That's the brief overview - here's a heap of gritty details:

Now, here's the order of events, though I'm a little hazy on what happened several months ago. 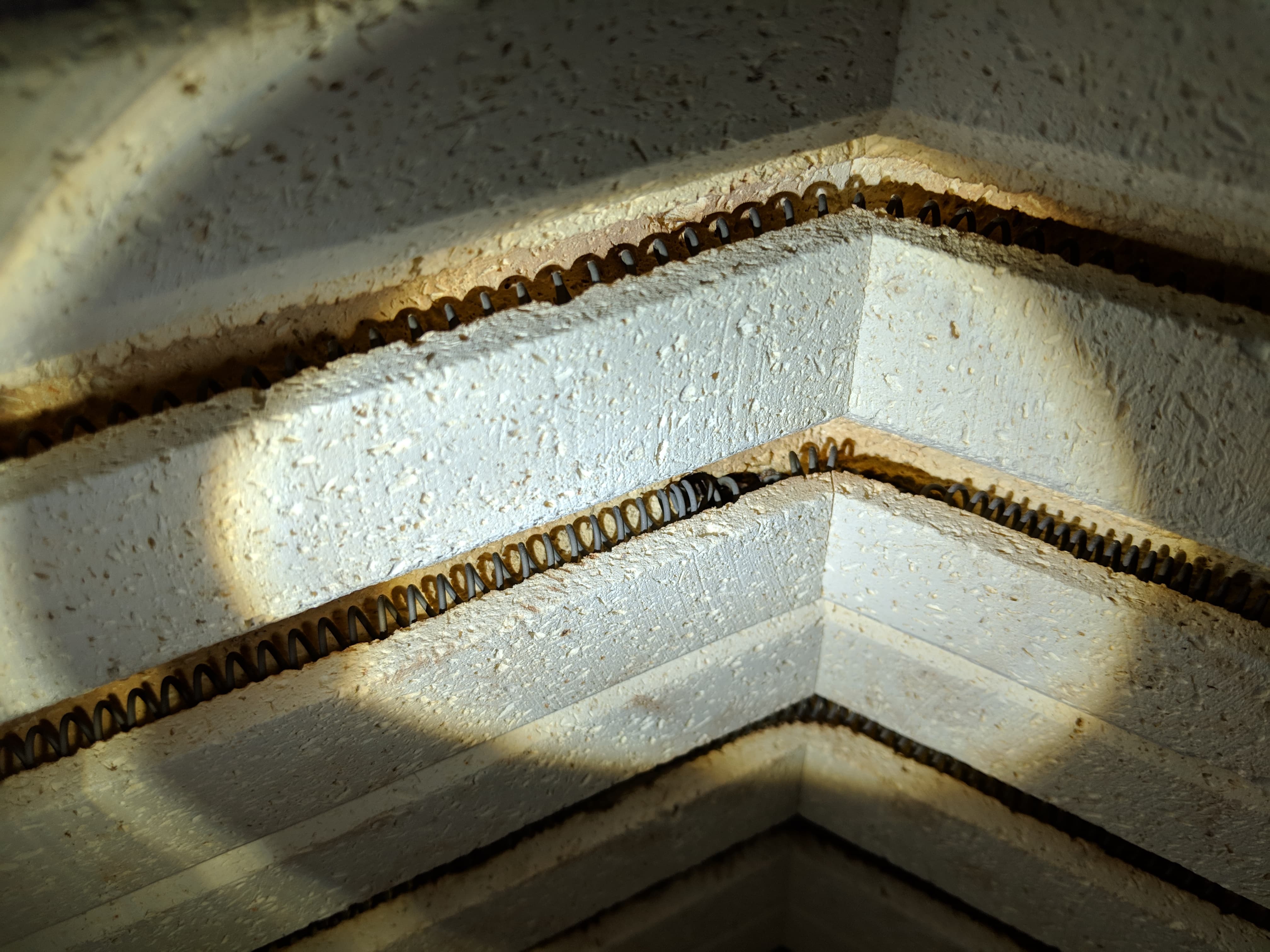 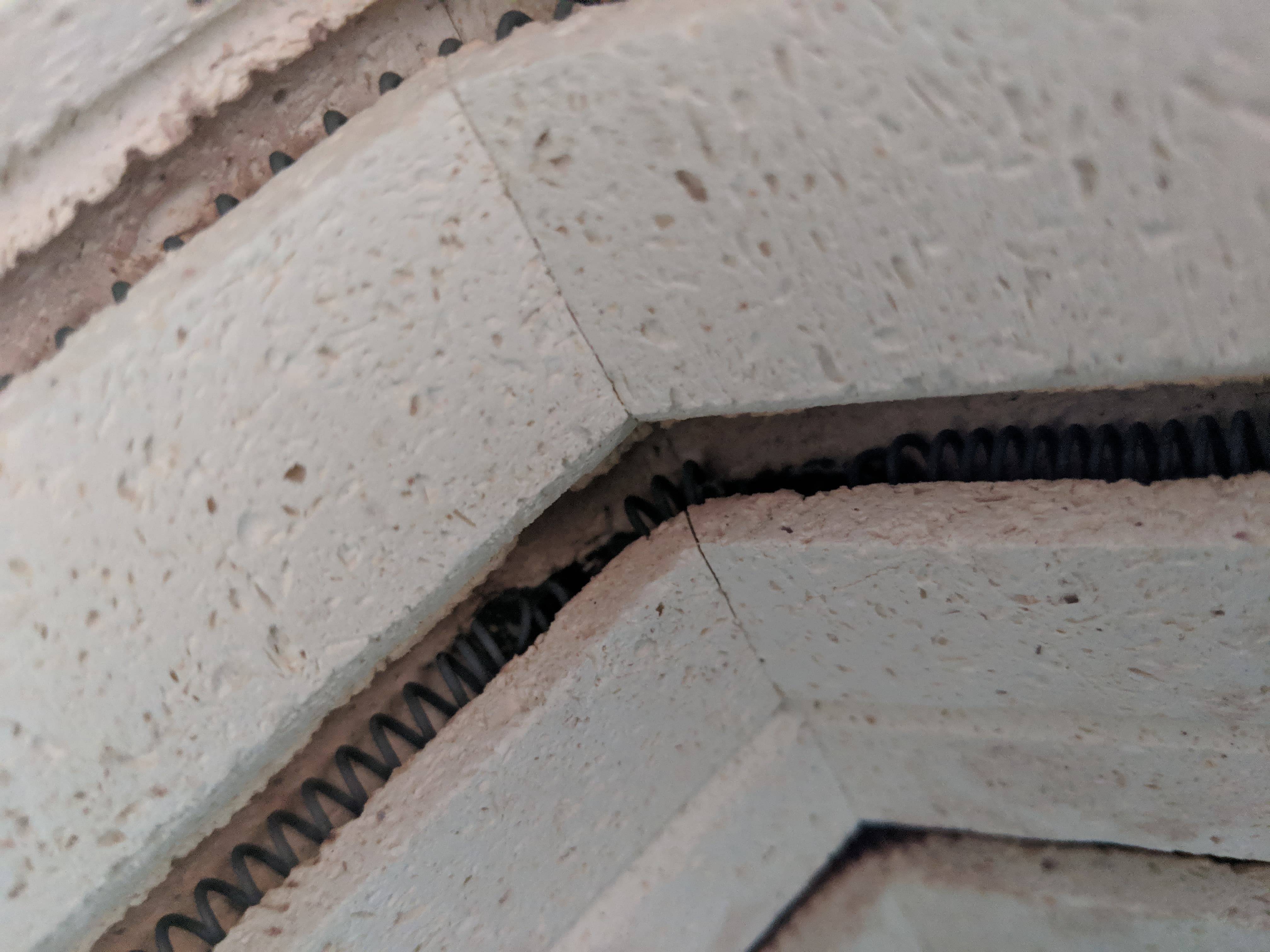 (We think that's the burnt out spot.)

We measured the voltage over the elements at between 220-240VAC, one specific measurement being 236VAC. Amps per element was about 16A. This yields 3776W per element, rather higher than the listed 3000W.

According to my research, I'm pretty sure heating elements are supposed to last much longer than an hour.

What could have caused the elements to burn and how can we avoid it?

Is the voltage too high?
Is it purely a matter of nicks in the elements?
Are they just oxidizing away?
Do we need to keep the lid closed?
Do we need to cycle the power more frequently?
Do we not need to worry about sudden temperature change of the kiln, after all?
Is the power-cycling causing expansion/contraction damage?
Is the reduction in length from the folding-over decreasing the resistance too much?
Are these elements simply garbage?
Above all, how do we not burn out more elements?

When the elements are connected directly to power, the only limitation is the inherent resistance of the elements. Ohm's law states that current is inversely proportional to resistance. The elements are going to be low resistance, which results in high current, and high heat, of course.

Unfortunately, in your situation, the high current exceeds the capacity of the elements. I'm uncertain if you would be able to find elements capable of handling "unlimited" current, primarily because if you have such high current, you'll probably trip a breaker or burn something else.

I'm not sure about the old technology stuff but today's controllers are digital and will pulse the current on and off to accomplish the desired temperature and heating profile.

If you can find a rather large power resistor, you could place it in series with your current source and drop the current to a non-element-burning level, but that's a bunch of experimentation and possible expensive resistor purchases.

I re-read your comment. The elements should be in series, to increase the resistance over the full circuit. When in parallel, the resistance of the circuit is reduced, not increased. That's an important distinction.

The problem could be the Kanthal ( Fe, Cr, Al ) elements. Although they will tolerate a little higher temperature , they are "delicate" compared to the Nichrome type elements. Most consumer heat elements are Nichrome because it will tolerate more abuse ( eg. range elements). Kanthal becomes very brittle once it has been heated. Also it is weak when hot so must be properly supported. Also it is susceptible to deterioration when contaminated by silica and other agents. If Kanthal is the problem , the solution is easy but expensive - replace with a Nichrome ( Ni, Cr, Fe, Al) elements.

Not the answer you're looking for? Browse other questions tagged metal metalworking ceramics kiln .

12
Multi-unit pottery kiln - how hot can it go?
4
How would I cut out lettering from a stamped piece of thick-sheet metal
2
What size saw blade should I look into for cutting letters out of a 1/32" sheet of metal (I think steel) with a saw
6
How to tack fuse glass frit and keep pores in glass
3
How do I get a glass jar out of refractory plaster?
7
Is it possible to melt a glass bottle without a kiln?
2
Making a diaphragm spring out of sheet metal