Any White Pens/Markers To Write Over Black Pens?

I'm just getting into drawing, and I've made a sketch that I would like to fill in with black, red, and white pens (or markers). Since pen is permanent, though, I'm concerned that I might accidentally go a bit into the white parts with the black pen, ruining my drawing. Are there any white pens opaque enough that they could cover up mistakes I might make with the black pen?

I'd try a correction pen, there are now quite a lot to choose from.

This web page shows over a dozen kinds, and how opaque they are over black ink.

Matching the paper colour and white pen might be tricky.

Personally, for purposes such as you have listed, I use the uni-ball Signa white gel pen UM-153. With a gel pen you will have more control over the lines you are creating, and can layer the markings as needed. You might also enjoy using toned sketch paper in the future to play around with color values. Here is an example of a quick, light pressure pass-over I did over black marker: 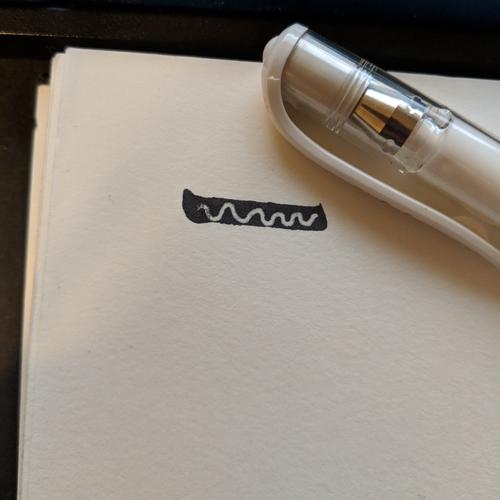 As I often write white text on top of black, I've been looking for a good white pen myself. A correction pen doesn't do it for me, as the correction liquid doesn't stick very well. The above-mentioned list of the best white ink pens seems like a good one. However, the pen I ended up using is not on that list.

I've found that the "Edding 780 paint marker" fills (no pun intended) my needs. It's a bit tricky to use, though, as it's easy to get too much liquid on the paper. However, you'll get the hang of it.

Example of white on black, using the Edding 780:

Not the answer you're looking for? Browse other questions tagged sketching pens markers or ask your own question.