How to free this sewing pin from the finished shirt

I had something rather silly happen today. I altered the cuff of a storebought shirt, then machine washed the shirt. While hanging it, I noticed this: 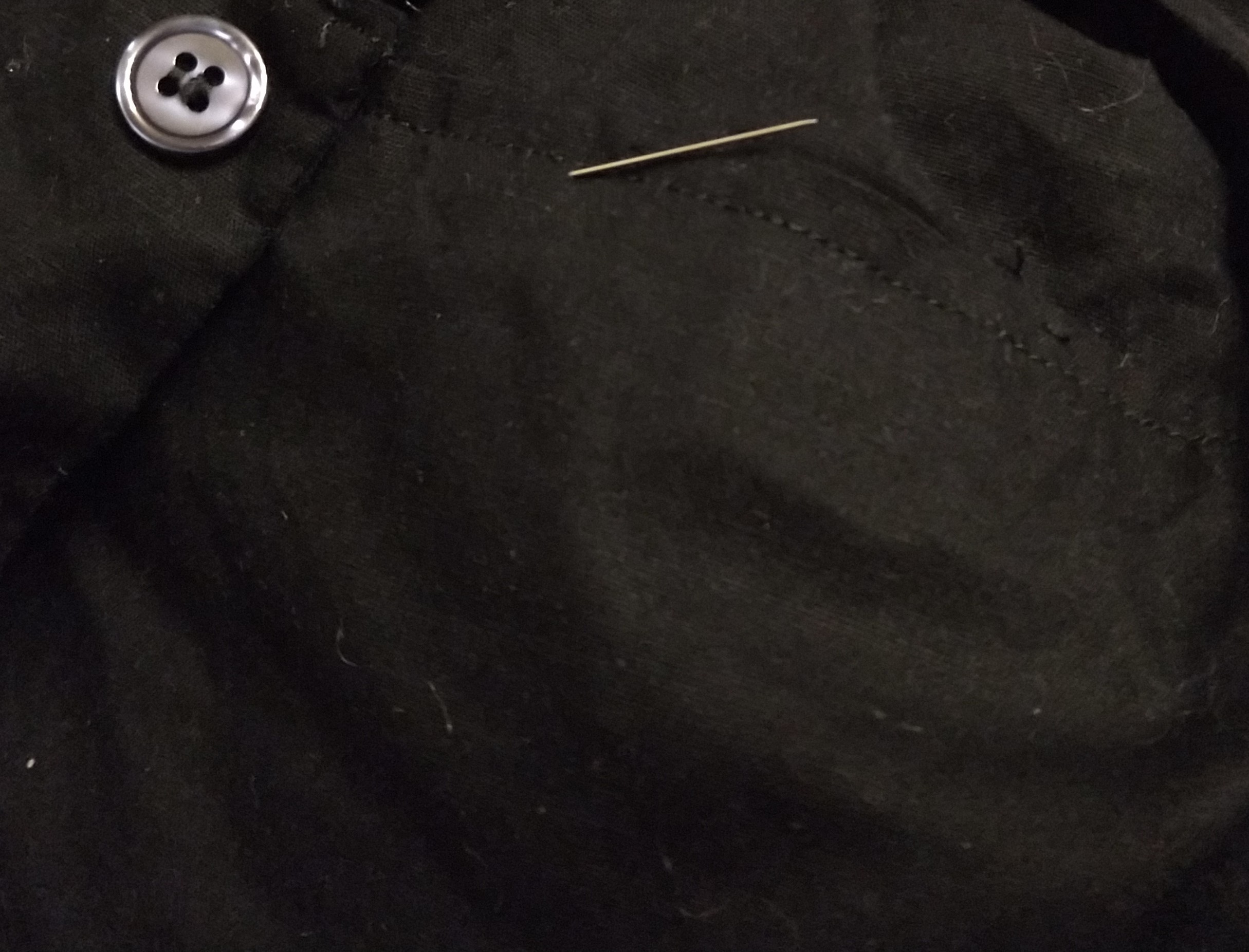 There is a pin left in the cuff. Its head is stuck between the two layers of the cuff piece, and its length pokes through the fabric. The shirt is made from plain, rather thin, cotton broadcloth. The offender is a glass-head pin, with a 2-3 mm head, and the head is larger than the stitch size I used to close the cuff.

I am willing to sacrifice the pin itself, if that would help somehow.

Try crushing the glass head with a pair of pliers. If you're lucky, the metal head inside the glass is small enough to be removed without opening the seam.

If it's still stuck, cut the head of with wirecutters like Henry Taylor described. Keep in mind that the needle head may rust after being washed several times. You should tuck the left-over head into a corner that's as invisible as possible.

Most of the metal shaft of the pin (including the pointy part) can be removed by cutting through it with wire cutters, being careful to minimize the length left still attached to the head, while simultaneously not damaging the fabric with the cutters. Detached from the head, the majority of the pin's shaft should then be easily removable.

Once the pin has been reduced to a pinhead, push any still visible shaft material into the space where the pinhead has been captured, then roll the pinhead around in that space until it reaches an out-of-the-way corner, where it can remain until its presence bothers you enough to open a seam and let it out.

Getting the metal part removed and leaving the head still present but tucked away invisibly, is probably the best solution you can attain without reopening the seams.

EDIT : One more quick thought. Take a similar pin that is not trapped in a garment and grab the head with a pair of pliers. Then grab the shaft with another pair of pliers and see if you can pull them apart. If you can, then pulling might be a better solution than cutting the shaft as it won't leave any of the potentially pointy metal trapped inside.

Pop one stitch with a seam ripper while holding the pin and slide it out.

Done this one a bunch of times.

Not the answer you're looking for? Browse other questions tagged sewing pins or ask your own question.

11
How can I stop my thread from bunching when using a sewing machine?
5
What's the easiest way to pin and sew leather binding?
12
What is this tool in my sewing kit?
3
How to sew this seam with a Brother 847 sewing machine?
5
How can I handle the existing thread from a broken seam?
5
Trying to find a sewing pattern or style name for this style of dess
10
How to reuse a sewing pattern without damaging it
5
Permanently mark pin placement for shirt
4
How to Slow the Speed of a Sewing Machine
0
How Do I Save This Shirt