Rotary tool: How to insert bits into collet straight?

I've got a rotary tool (aka Dremel) with a collet like this one (aka quick change collet): 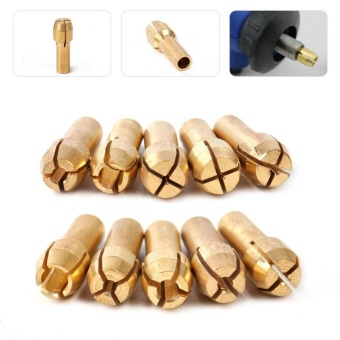 You insert the shaft of an accessoir like a drill or diamond bit and tighten the collet nut to hold the accessoir in place. The accessoir is supposed to be centered automatically.

I want to use it to engrave a rather delicate ornament into glass. During my first tries with this tool I noticed that the diamond bit often isn't centered in the collet and creates a very wide line with chipped edges instead of the fine lines it should produce. When I start the tool I can actually see how the tip of the bit isn't centered (it looks like a double image): 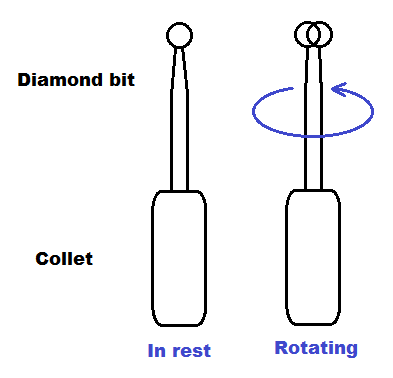 When I notice this, I have to stop the tool, loosen the collet nut and wiggle the diamond bit around in the hopes of centering it by chance, then start the tool again and see if I was successfull.

How can I insert a bit into the collet straight on the first try?

I have bought high quality bits, so I assume they are straight. I always use the collet that is just big enough to insert the bits and always push the shaft all the way in. Since I get it right sometimes, I assume the machine itself is not to blame.

it seems that you are inserting the bit in correctly, it just seems like it's not going in straight some of the times. Besides being careful when inserting the bit, I'm not sure how else to guarantee the bit is set straight without some additional tests. If you want to make sure the bit is in correctly without damaging your ornament, after you insert the bit give it a quick test on a scrap piece of material to ensure that the bit is straight. Or, if you can see that double-image effect, before engraving into your ornament just run the Dremmel tool and examine the rotation of the bit to see if you get the double-image, at which point reset the bit.

I'm embarrassed to not have noticed it sooner, but I found the reason.

I was pushing the shafts of the accessoirs in until I felt them touching a hard surface, but it was not the exact center of the back of the receiving sleeve. From what I could feel (I cannot look in there) there's a funnel-like structure at the back with steps instead of a smooth surface. I assume this is to accomodate accessoirs with shafts of different widths. The shaft was stuck on one of those steps instead of resting at the very back. I made a schematic representation: 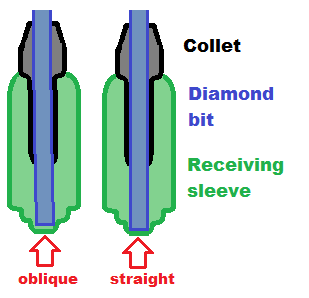 I actually have to push the bits in with some force to get them into the center position, otherwise they catch on those stepped structures.

With such a wide range of collets... are you sure you have the right one for the bit? With the right match it shouldn't be possible to tighten it fully with the bit off center.

It may be the bit itself is bent slightly... try rolling it by itself on a hard flat surface to check if it is true. It should roll evenly without any wiggle or bumping.

In the original author's case, the cause turned out to be what was intended by the manufacturer to be a wobble reducer. The tool's collet sleeve contained a stepped area to center the end of the bit shaft, and the shaft was catching on that, forcing it to an angle (the accepted self-answer). Many rotary tools don't have that stepped area. There is another common reason for the bit to wobble as described in the question.

Start with the tool and bit individually:

Tool and bit in combination:

If this entire procedure doesn't eliminate the wobble, check another new or known-good bit. If you also can't eliminate the wobble on that one, it indicates the problem is with the tool. It could have worn bearings, it could be damaged, or it could be just a cheap tool that lacks precision. You may still be able to use it for awhile at a slower speed, but once it starts to wear out, the problem will accelerate. If, on the other hand, the new bit doesn't wobble, it means the old bit is bad and its problem isn't correctable.

Not the answer you're looking for? Browse other questions tagged tool-usage or ask your own question.

4
How can I avoid chipped edges on glass etching with a Dremel?

1
Learning to work with a rotary tool