I'm trying to make a fairly minimal wallet out of an old inner tube (for use while cycling, with one card pocket and one change pocket into which notes can go as well). The basic structure of my prototype is there, but it's not quite right yet.

One thing that's annoying is it doesn't lie flat enough. The folds could do with being creases, especially on the seams (that I've turned onto the inside). Construction is a mixed of hand-sewn and glued with contact adhesive, and my sewing isn't very tidy so I'd rather not add visible stitching. I also want it to be as small (in terms of area) as possible.

Here are some pictures. The visible glue marks on the right in the second and third shots are where I've removed a strap made from another piece, that's meant to hold it shut. Some re-working is required there (sewing as well as gluing, for strength). 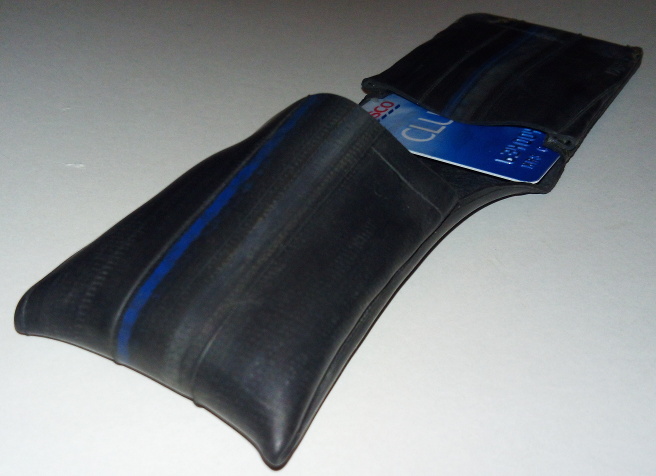 With a card in there, it lies flat but the other end, intended for cash, doesn't.

Even though this is only for my own personal use, I'll probably remake the next attempt from scratch, as the coins escape -- that pocket needs to go closer to the hinge and/or have a flap over it

Is there any way to press a crease into rubber? The hinge in the middle and the ends of the pockets both need it.

Have you considered topstitching?

Stitching down all the edges that you want to have a crease in them will offer a mechanical fastener, in the form of thread, to keep the folds in place. This sidesteps the rubber's resistance to being holding a crease.

You can test how it would look by attaching clothes pins or similar along where you would topstitch.

Not the answer you're looking for? Browse other questions tagged upcycling rubber .

1
Make foam rubber case
3
How to apply rubber to wood?
2
Waterproof paint for rubber
7
what rubber to buy for wooden wheels
3
Can I mix acrylic paint into liquid latex rubber?
4
How to securely glue leather to rubber?