I am creating a sword for cosplay, and I need the material used to be clear, rigid, and lightweight, and to cure properly in such a thin mould (and can be poured into the mould I have, as I'd prefer to not start an entirely new process, although I'm open to any suggestions).

I have a mould made from a platinum-cure silicone rubber. It's a pretty simple shape with a 3mm thickness. 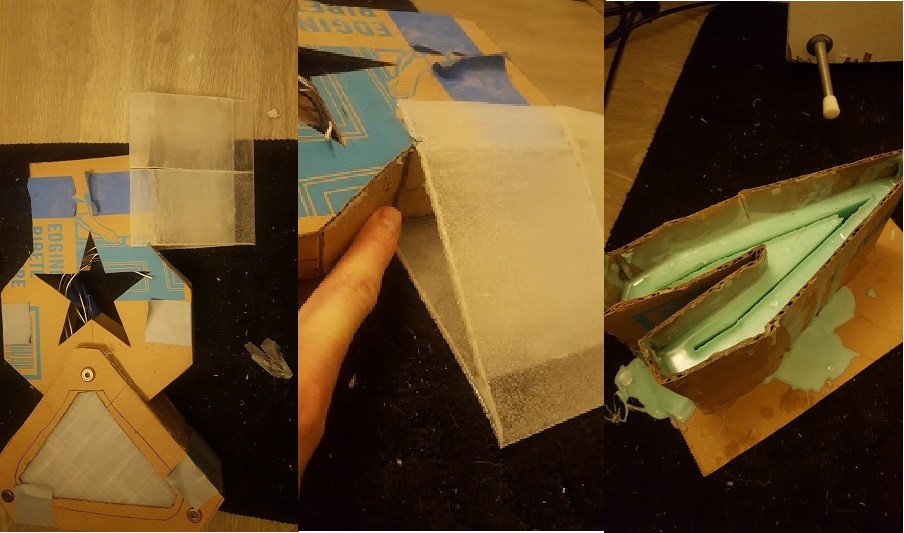 To the left, the blade will be made by connecting multiple together. The center: I'm pointing at where I'll put the LED strip, facing outwards to light up the plastic. To the right: the mould used

I have attempted to use a fast cast urethane resin, with a shore D hardness 72 that is clear.

The material I used is mass sensitive (cures better at a greater volume/thickness), and does not get very rigid since the mould is quite thin.

Are there any other types of plastics I could use that meet my needs?
I can include pictures of the shape I've tried to cast if that would help, or links to the products I've used so far.

Browse other questions tagged plastic mold-making or ask your own question.

7
What paint to use for outdoor plastic chairs?
4
Complex plaster molds for ceramics
2
Can I use Lucas oil colors for painting plastic kits?
2
Adhesive for applying keyboard keys to wood
5
What material can be used to create a mold for pouring any molten metal without problems?
1
It is possible to create powerful crucible that you can melt plastics in it? If yes, how can I create it from simple materials?
2
Alternative for wickes PVA glue in america
6
What type of paint for mildly flexible plastics?
2
What materials can I use to make a cast for melting lead?