Why is my papier mache balloon changing size between layers?

This is actually something I have observed with my wife's pinatas.

I understand that as it dries it should shrink a little but I have seen papier mache balloons shrink leaving a wrinkled mass. I have also, on separate projects, seen it split down the side in between putting down layers. In this case the balloon inside does not appear to be getting smaller but large.

What is causing my wife's papier mache balloons to change size?

Her process involves using long strips of newspaper. Near identical to the following picture. 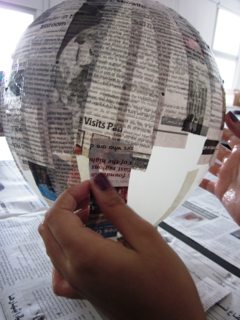 Between layers she leaves the balloon alone and propped up in a bowl to keep it vertical. As it dries she will turn it upside down to allow the other side to dry as well. Not all of the pinatas have this issue. Just from time to time.

Temperature in the environment

This would answer both cases.

It is important for the project to dry in the same environment (temperature) in which is was created. This might seem obvious but small changes can affect this. Time of day for instance.

If working indoors the sun might not be directly on the project initially. If left for many hours after, layers may dried with heat from direct sunlight that could make the balloon inside expand.

The opposite could apply as well. If the project was in direct sunlight while the layer was being applied it could have then cooled while it was still setting. When the base you are forming your project on moved it will set in unexpected ways (turning into a raisin).

This also could happen if you take the balloon outside for example to have it set faster. A change in the environment while the balloon is drying is likely causing this to fail.

Keep the project in the same place and avoid changes in temperature. This is more crucial for the first few layers.

A wrinkled balloon can usually be ignored by adding more layers, assuming the project calls for it. As layers get added the imperfections are hidden.

A busted seam (or join) can also be fixed by patching with more papier maché. In the case of the piñata, this might be less than ideal, as it introduces a weak point. Setting layers with the paper strips perpendicular to each other can help fix that.

To explain what Matt said, a change in temperature, there's a law in physics. Wikipedia says

Charles's law, or the law of volumes, was found in 1787 by Jacques Charles. It states that, for a given mass of an ideal gas at constant pressure, the volume is directly proportional to its absolute temperature, assuming in a closed system.

In other words, as the temperature decreases, the gas molecules in the air inside the balloon get more sluggish, bounce around in a less active way inside the balloon, and push less on the rubber; and this makes the balloon shrink a little bit, resulting in wrinkles.

As the temperature increases, the molecules in the balloon get more excited, bounce around more in side the balloon, and push more on the rubber, which makes the balloon grow a little bit. Result: the papier maché shell busts open, like a too-small pair of pants.

Not the answer you're looking for? Browse other questions tagged papier-mache or ask your own question.

4
Papier maché with toilet paper
1
What wire would be suitable for a papier-mache armature?