When drawing shapes made from overlapping spheres, how should I draw the lines that indicate curvature near the intersection?

The style of line-drawing that I am asking about is exemplified by the two images below. It's an economical style that uses little or no shading, and conveys curvature by using small lines or clusters of lines. I've pointed out some examples in the first image. An example in the second image is the inverted U halfway down the lefthand side of the bottom leftmost shape.

[ Image: from Cartooning Self-Taught by Bill Nolan, via the Internet Archive. ] 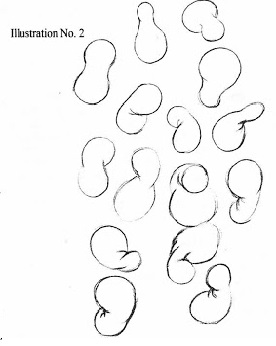 [ Image: from Illustration No. 2 in The Vilppu Drawing Manual by Glenn Vilppu, via If You Can Draw a Form, You Can Draw EVERYTHING by Rochelle Krause ]

The latter image is from an exercise where Vilppu asks the reader to draw forms made from overlapping spheres quickly, to help learn to draw gesture in people. The lines he draws near their intersections convey form adequately, at least to my visual system. So do those in Nolan's little booklet. Unfortunately, neither artist explains how to decide what lines to draw. Nor do other art books I’ve looked at. Some artists have told me that they had to learn this by looking at lots of examples. But it takes lots of time to find examples and work out how they convey shape information. So I want a better answer than "look at examples".

Steps towards another kind of answer are given by recent research papers on non-photorealistic rendering. The Princeton Graphics Group have done a lot of work on this. They’ve analysed line drawings by skilled artists to try and find a mathematical description of these lines. That is, how they depend on illumination, surface curvature, and other properties. And they’ve written programs that draw in similar styles to these artists. The site is down, unfortunately, but here’s an image that Google has cached from one of their research papers, showing the kind of style they’re interested in.

So in principle, such work could provide an answer. But until it does, can anyone point me at a concise set of rules for where to draw these curvature-denoting lines?

By the way, just to preempt some possible responses, I already know that T-junctions in line drawings give cues about occlusion. That's part of what's going on here, but there's more to these little curvature lines than that.

If I understood the problem well, I would say above examples are using "the rule" of line weight.

It took me some time to find these videos. Since I am not an expert on this subject, I thought letting professionals explain it was much better idea. I have been given advice to try an summarize the content of the video. I somehow find it unfair towards artist. However, I will try to add more details by using the knowledge I have. However, consider watching these videos done by artists who are really experienced in that field:

What is line weight and what can it do?

To simplify, line weight is the weight you put on your pencil while drawing and thus producing darker or lighter lines.

Weight refers to the strength, heaviness, or darkness of a line against the background. It can be achieved through different thicknesses, intensities, and sometimes even different patterns - dashes, dots etc. Traditionally, you would generate a heavier line by applying more pressure, or by angling the pencil to produce a thicker line. Today, you can find pens with different nib sizes, and pencils and leads with different hardness to aid the process of producing different line weights.

To indicate closer objects, overlapping edges or stronger parts of an objects as well as curves where the shadow would fall, thicker line is used.

To indicate objects in the distance, edges of the objects behind other objects or to draw parts where a light would fall, thinner line is used. 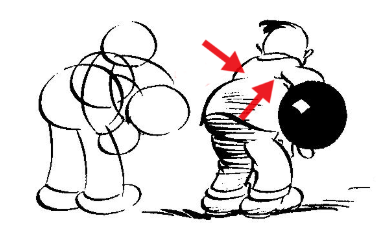 To analyze this drawing lets take a look at thicker lines. Thicker the line, more weight it has. Following what I stated above, I have concluded that light, on this particular drawing, comes from upper right corner.

First thick line is on his right arm, exactly where your arrow is pointing. It is under the arm, which means an indication of shadow. Another is on his back, precisely under your left arrow. That means, shadow is falling on his left side. If you inspect drawing more, you will see that most of thick lines are on the left side or "under" his clothing. The line under his coat is also thick, which indicates that his coat, or jacket, has been lifted as he is trying to throw the bowling ball.

One big hint to this is the shadow artist drew on the left leg of this character. Where the darkest areas are, artist drew couple of parallel lines to indicate it.

We can do the same by following lighter (thinner) lines.

Lets take a look at the area where you left arrow is pointing. It is indicating curvature. Obviously, our character has "stronger back". However, that particular part of the line is lighter because the light is hitting that part of the character's body.

Applying this reasoning to other parts of the same drawing (or other drawings) will show the pattern which will become easily recognized further on. 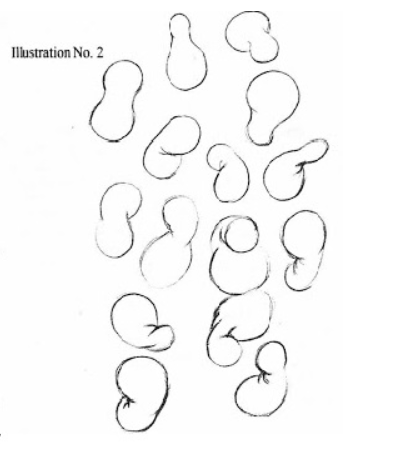 Now, these sketches are using the exact same rule. I am not sure is the "rule" right word to use. Maybe approach, principle or technique would suit it better.

Look at lighter lines: that is where the light is hitting the object. You will see, that on the opposite side heavier line is drawn. This does not always have to be this way. It all depends on how many light sources you have, what object your are trying to represent and so on.

However, the pattern is there.

Lets summarize it with some examples

So, by varying the weight of the line we can indicate: 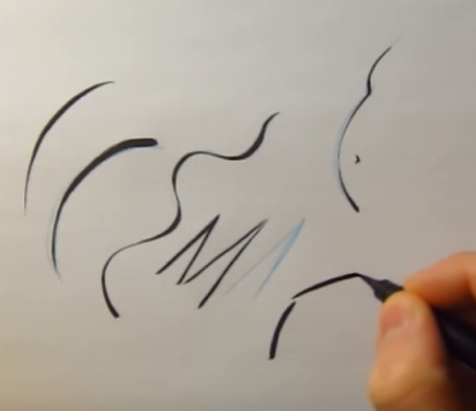 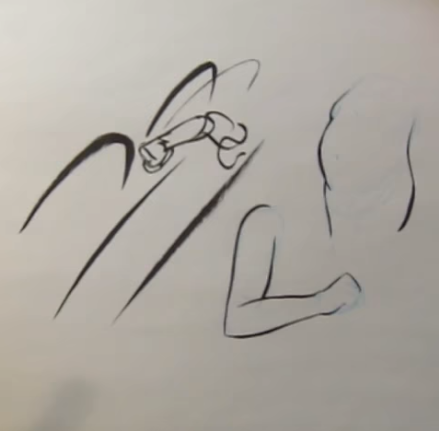 To add stronger muscle, artist is using heavier line. That makes perfect sense if we think about it in this way: If a person is standing in such a way that light is hitting them from the right side, left side of that person's body will be more dark. The further the body part from the light is, the darker it gets. So, if we want to draw someone who has huge muscles, or any curves to generalize it, the bigger the curve is, further away from the light source is positioned which means it is darker. On the other side, if curvature is being hit by the light, bigger the curvature, lighter the line is, because, now, our body part is getting closer to that light. In real life this can be seen. The more we lit one side of the object, the lines of that side are becoming more or less noticeable (depending on the background)because of the reflection of that light. 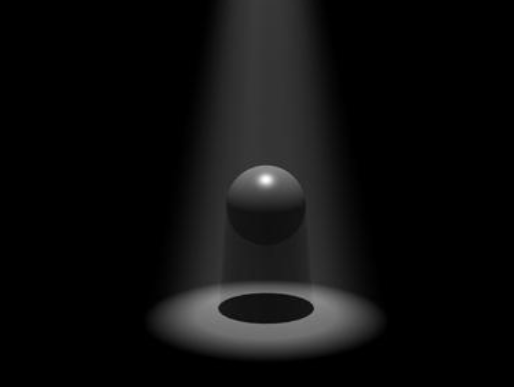 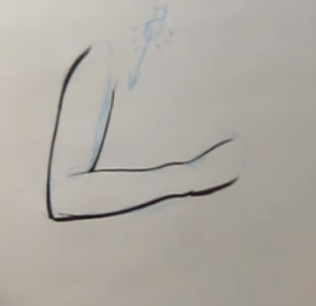 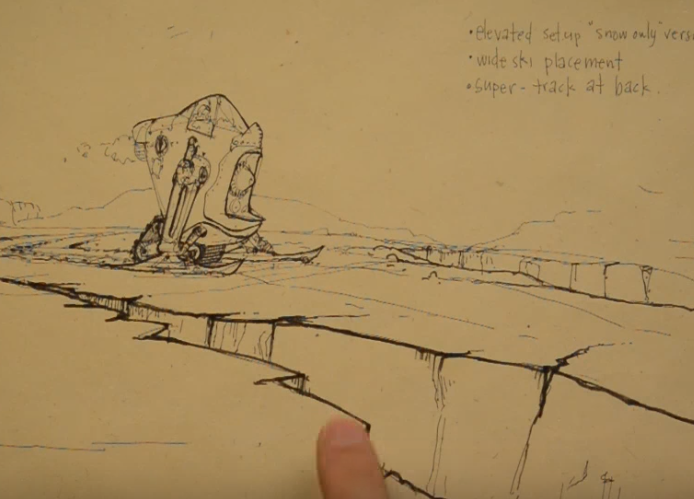 Further away, lines get lighter.

These steps are applied in the drawings you posted. However, these steps do not have to be followed precisely. Sometimes, you can just vary the weight of the line and get nice results.

P.S. Screenshots are taken from videos I posted above.

Not the answer you're looking for? Browse other questions tagged drawing sketching .

9
How do I keep my ink from smudging when I draw?
11
Which kind of pencils should be used by a beginner for drawing?
6
What is the term for drawing wireframes which are drawn before drawing the actual object?
8
What exactly are carbon pencils?
5
Am I going about learning to draw the wrong way?
1
Drawing a newborn baby
3
Is it possible to get a "crutch" when learning to draw that will stop you from drawing well?