How do I get a blur (blended) effect in pencil drawings?

When drawing pictures with a pencil, I often want to create a more or less solid darker colour in some region. It's easy to shade an area so that it appears a solid dark colour from a distance, e.g. by hatching or cross-hatching, but I'd like to be able to blur the lines in a hatched or cross-hatched area so that the darkness is uniform even when looking at the picture close up.

In the past I achieved this using a special eraser I had. As an eraser it was very bad, since instead of rubbing out pencil marks it blurred them and made them spread darkly across a bigger region. This, however, made it perfect for creating uniformly dark areas in pencil drawings.

Now that I don't have that eraser any more (or at least, I don't know where it is to lay my hands on it), I'd like to know a better method.

After shading an area with pencil strokes, how can I blur these strokes together to get a uniformly dark region?

The blurring you're talking about sounds like blending, which is the technique of evening out or gradating values and colors.

Probably the simplest way of blending your regions together, whether matching values or values you want to merge together, is by rubbing it with your finger tip! You'll want to make sure your fingertip is clean, and oil-free, so that you don't smudge it with something else. Then, you simply rub. The direction you rub can have an effect.

Now, there's also tools made specifically for this, called tortillons and blending stumps.

They're made of tightly-wound paper. Tortillons being less tight than stumps, likely hollow, and you can clearly see the layers of paper, like the tip of a grease pencil. Blending stumps are so tightly wound that the seem more like a solid chunk of the paper with a point sanded off. 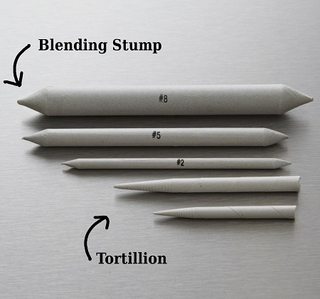 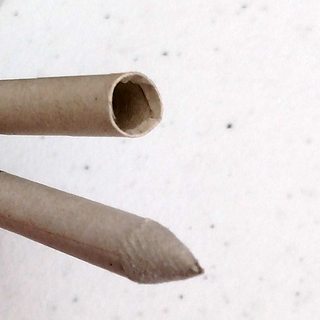 These give you much more precision over the blending. They come in many sizes, which makes them more adaptable than the five sizes of your fingers.

A plus to these is that as they blend, they tend to pick up more of the graphite dust in their fibers, evenly spreading it around the area and getting dust off so you don't need to use a brush or air. Your finger will end up absorbing the graphite or charcoal, but will layer it and compress it from the pressure. These can lead to you smudging dark areas of light ones accidentally if you forget to clean up.

The downside is that the tortillons don't really clean up, so if they get too much graphite built up, you'll only want to use them for matching values. To counter this, most tortillons you can purchase have the ability to peel away the outside layer. Failing that, you can use a sandpaper pad, similar to what you can use to sharpen a pencil, to rub off the rough edge.

In my experience, tortillons, both bought and homemade, tend to give a softer blend than stumps. I've made my own tortillons by wrapping up old drawing paper (possibly with a bad sketch on the inside) and taping the end seam. These homemade tortillons have given me the softest blends, as the dull point often frays. 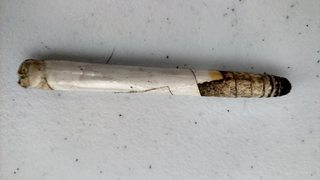 My homemade tortillon, not a weird cigarette. Notice the curved, feathery tip.

Here's a comparison of the four tools I mentioned, using an HB pencil: 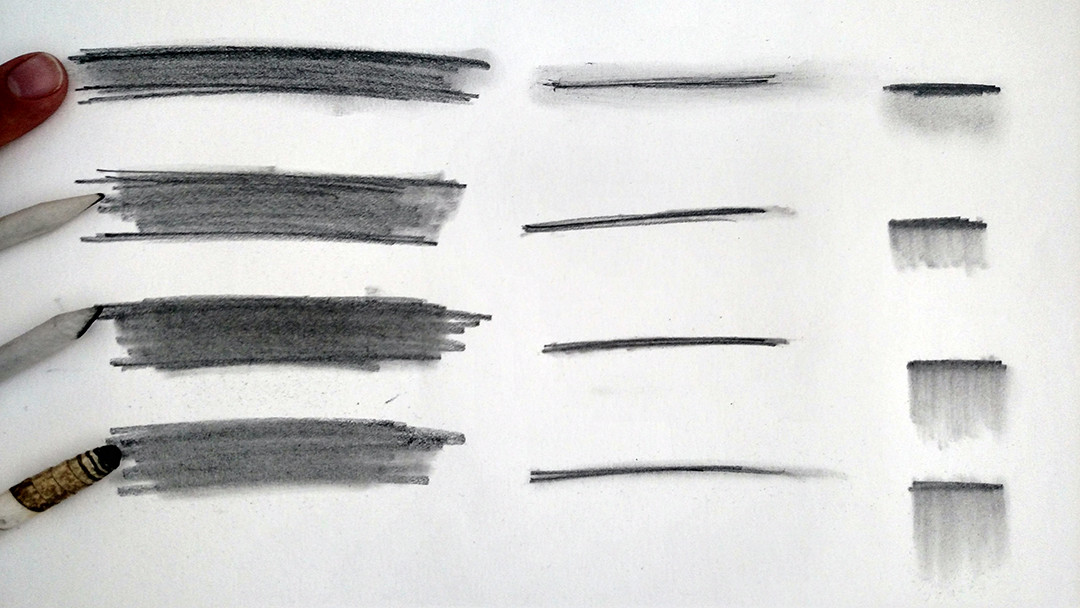 I didn't blend any two values together for this demo. You will probably not just lay down a single dark line and blend outward, like my last column. Instead, you'd create a gradation yourself by using pencil pressure and different hardness pencils, then blend those values together with your tool.

You can also use different grades of pencils to change the tone of the work - also known as blending (an introduction to art techniques, glossary).

To accomplish this sort of blending you use different pencil grades.

The best example of shading and tone transition that I've seen is in The Art of Pencil Drawing, by Gene Franks.

He uses an H, F, HB, B, 3B, and 5B pencil to achieve a full range of tone. Start light make the H go as hard as you can comfortably get it then pick up the F and overlap continue as such with remaining pencils and various hand positions/techniques while drawing. Practice is recommended in his instruction of achieving tone. He says, "practice this as a musician would practice scales."

Personally I use and have used as many grades as I can get my hands on. I tend to stay with graphite, turn away from the F's, and by far consider the 12B pencil to be my all time favorite. Dark, soft, hard to find.

Graphite, I read once, is supposed to be water soluble and create a sort of "water color" look to the pencil when water is applied. I've never quite got the look or hand of it. I find that a blending stump is most effective and comfortable when trying to soften up a sketch. That or my fingers.

Q-tips, erasers, water, and tortillions have been unpredictable; no matter the support.

Not the answer you're looking for? Browse other questions tagged drawing pencils pencil-shading blending .

2
How do I blend charcoal enough to make it look like a skin surface?
1
How can I make charcoal?
0
What paper type should be used for charcoal drawing?

3
On what factors does choosing pencil shading technique depend?
9
Do I need a non-photo blue pencil for scanning drawings?
26
How can I avoid smudging my pencil drawings?
9
How can I protect my pencil & charcoal drawings once complete?
1
Drawing a newborn baby
5
How to draw a heat blur from an aircraft engine
4
How to create a glitter gold effect with colored pencil
1
How should I keep my unframed A3 size pencil drawings?
3
How to tell a story through pencil drawings?
6
How do I prevent pencil colour drawings from fading away while I'm still drawing it?