I'm gluing dyed pasta to paper with my son, but it's hard to get it to stick without an obscene amount of glue (Elmer's liquid) or decoupage (Mod Podge).

I'm using cardstock paper, so the glue doesn't soak through or wrinkle. Should I use a different paper with more tooth? Noodles and paper are both fairly smooth. Is there an adhesive that works better for smooth on smooth?

I'm preferably looking for a kid-safe solution, but it's not necessary.

Yellow carpenters/wood glue or white craft glue should both work fine for kids projects. I found yellow glue to be a little stronger.

I think it is important to give the glue time to cure / dry. Following the instructions on the bottle would be important to ensure you are using the glue properly.

When gluing macaroni make sure the entire surface, where the noodle is contacting the paper, is also covered in glue for best adhesion (No exposed ends). You don't want to hide the glue. A good dollop of glue that also surrounds the noodle works best.

it's hard to get it to stick without an obscene amount of glue or decoupage.

I am actually not sure why you had issues. That being said I don't know what you consider obscene and what glues you used and your specific paper.

While not a comprehensive experiment as I was testing with products and materials that I had available. I do think between the two of these you should have a good basis for choice though. My breakage tests also are slightly flawed as I don't have the tools to measure pressure exerted nor the ability to make each break with the exact same circumstances. There are other glues that I could have used, however, given my findings, I think the issues would have been the same.

There are things that I could not test with and choose not use.

I don't think a glue stick or glue dots would be good for this. Hot glue gun could work and even double sided tape. In the case of the latter you might have an aesthetics issue. Gorilla glue or PVA's would also work. Gorilla Glue is an expands while it dries, which I know from experience, so it might not be what you want to use here as it might warp the work.

I tested with 3 different paper stocks. Canvas paper, thin cardstock and printer paper. For glues I used carpenters glue (Yellow) and white craft glue. These glues can be considered kid safe and non-toxic. Consult product labels to be sure.

I used brand-less macaroni that I purchased specifically to do macaroni art. The glue was applied with different consistencies to see if the amount of glue was important.

For each piece of paper I logically divided it into 8 parts. Each glue was given an indicator box and 3 spots where the glue was applied lightly, heavy and an in-between consistency. The white glue had nozzle so I was able to apply it easily. My yellow glue nozzle broke ages ago so I used a craft stick to apply it. The two below pictures show how much of each glue was applied.

I then proceeded to add one piece of macaroni to each glue site. I made sure that the macaroni was lying flat to the paper to increase the gluing surface area. This picture shows the tests in a completed a drying state. The glue is still wet as this point. 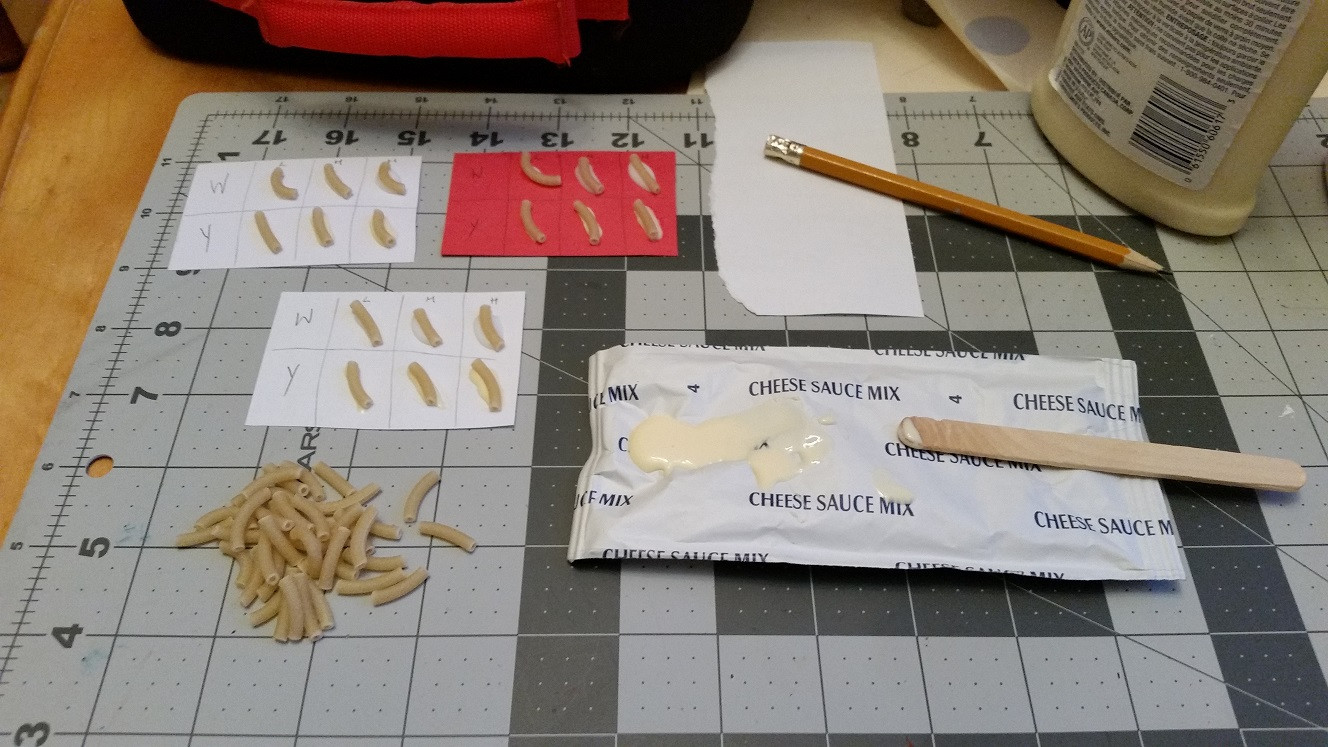 The drying times for each glue was 30-35 minutes. The carpenters glue recommended 24 to allow a full cure. I waited 12 hours before I tested and I think that is fair.

I mentioned earlier that this needs to be taken with a grain of salt so I don't suggest using this as a thesis source. This also doesn't cover long term durability1. Here is a picture of the macaronis after I put in effort to remove them all.

To remove the noodles I used my thumb and pushed from the side of the noodles. There were some that I could not remove like that an had to grab from the end. If the end was not glue I was able to grab under it and pull. If the end were completely glued I would not have been able to do that and it should have been harder to pull off.

I found the yellow caprenters glue to be better than the white craft glue but not by much. In all cases the glue held and the paper failed. As you can see in some pictures the noodles actually broke. I found the canvas paper to hold onto the noodles better. Likely that is because it was thicker and had a textured surface. The printer paper failed easier. In the printer paper's defense the glue still help to the paper rather well. Still, it was the weakest as I expected it to be.

The glues warped the printer paper significantly and the cardstock somewhat. While I do notice that the other side of the canvas was wet the overall shape was not change i.e. it remained flat.

In short if I was to choose, based on best results, my option would be yellow glue with the canvas paper. I would use enough glue to cover the entire noodle and have enough to sightly pool around it (My heavy option pictured above). The cardstock I used was perfectly fine though.

1: I do have a tangential case I can refer to for this though. 3 years previous to this post I made a anniversary gift for my wife that was macaroni art. I used the exact same macaroni (from the same box) and yellow carpenters glue. This was applied to a small section of wood. My wife displays this in our living room as she thinks its funny. After 3 years none of the pieces have fallen off (This has not been in direct sunlight the entire time). A couple noodles shattered from a fall a while back but the macaroni portion that was glued did not.

This might seem very odd... like very odd... but I tried doing the same thing, and how I got it to work was, glue and water solution.. like 80% glue and 20% water, then you apply it to one side of the pasta, you lay the paper flat onto the ground/table and then leave it to dry, as I live in a fairly hot country so it dried up pretty fast, but as impatient as I am, I just blasted it with hair dryer and setting the max heat and low air force(as in more heat and less air) on my dryer, this dried up very fast.

Hold the dryer directly on top of the paper, vertically, and keep it a little farther from the paper because if it is near the pasta goes flying !. hope this helps.

I once made a 50/50 mix of white PVA and wallpaper paste. It provides a quick grip from the paste and then strength from the PVA. The mix stays useable for at least a week if kept in a closed glass jar. A kid safe glue could be made from flour and water paste plus school PVA.

36
How can paper be glued to cardboard without creating wrinkles?
6
Which glue works best for paper sculptures
9
How can I get children's paper masks to last longer?
2
Which adhesives work well when gluing vinyl to plastic?
5
What type of glue to stick paper on paper without curling?
4
Gluing metal to glass
7
Paper Bridge Project
5
How to paste tissue paper onto thicker paper?
1
Options for gluing thick paper to acrylic sheet
3
Gluing fabric or ribbon to walnut shells