What are the different kinds of erasers used in graphite drawing?

When you are drawing you inevitably make mistakes. Erasing therefore is a large part of drawing. Not just for mistakes either. They can aid in shading and detail work, like hair, and other fine details.

Erasers are obviously important. What kinds are out there when it comes to pencil drawing? I see many of similar colours, styles and hardness. What characteristics make them unique and, at a broad level, what are they designed to do?

While there are different manufacturers and styles there is finite number of basic modern erasers.

This is a commonly found eraser outside the drawing community. Usually pink in colour and rough in texture (due to the abrasive). This is the same eraser type that would be found on pencils with erasers.

These remove graphite by shredding themselves over the paper leaving bits behind. If used incorrectly they can damage your drawing surface by tearing the paper.

There are also black and white erasers of similar firmness, but erase slightly more like the vinyl/polymer erasers. They are still abrasive, but less prone to tearing or wearing away your paper.

Usually large an brown in appearance. Can also be blue or transparent. They are generally softer to the touch.

They will fall apart or crumble, in larger bits than other erasers that function this way, as they are used. This is by design and why most are larger, compared to other typical erasers. The bits help pull and hold the graphite. Because of how they function and the fact they are softer allows them to be used more easily over large areas and don't generally damage the paper. This also means they have a shorter life span. 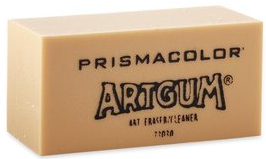 There are white and the usually the toughest of the erasers discussed here.

They are adept are removing a greater portion of the pencil and getting you back to paper. Graphite will stick to the eraser portion so one needs to be careful as you can accidentally transfer pencil to another spot on the page. There rigid shape allow you to cut them to remove used portions if you wanted or to create shapes and contours for more specialized removal. They come in multiple colors, but their function is identical. 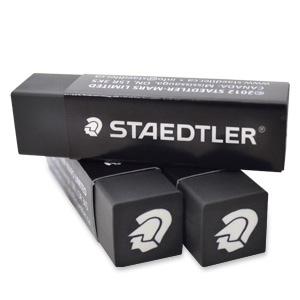 Almost all artists will have a kneaded eraser in their arsenal. They are very soft, mold-able and usually grey.

They are designed to conform to most any shape for detailed adjustment and a ergonomic hold if need be. They actually lift the graphite from the page to the eraser. Once that part of the eraser is not working as efficiently you would fold it back into the eraser to expose more unused surface. The picture below shows a new eraser to formed and then a used form (which is darker from graphite). There is next to no risk to the drawing surface when using these. 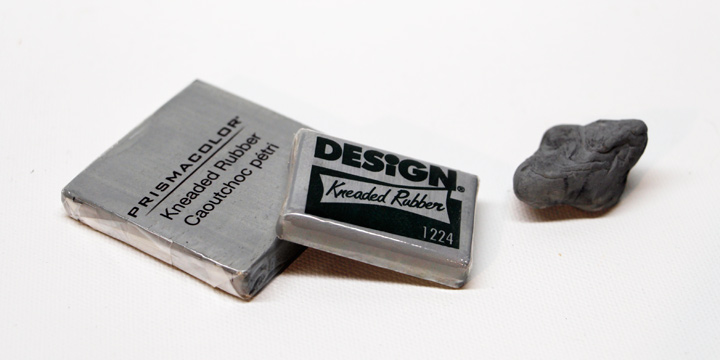 These are straight forward pencil with an eraser core. However the core can be like the pink eraser or a plastic vinyl one.

Since they can be sharpened to a point and are for fine or detail work. A slightly larger variation of this is an eraser stick which has a long eraser core which gets pushed out in the same way you would a mechanical pencil. 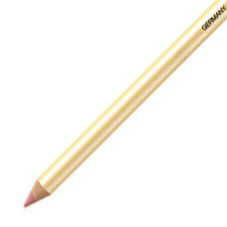 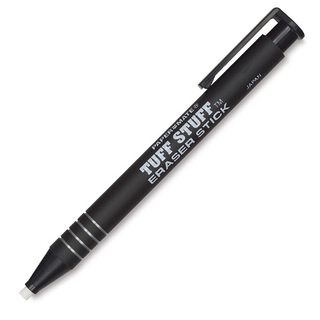 These are also simple to identify. Looking much like a hand held rotary tool with an eraser bit in the collar.

While they might seem like a novelty they are good at what they do. Since the eraser is rotating during function is take very little pressure to get good results. 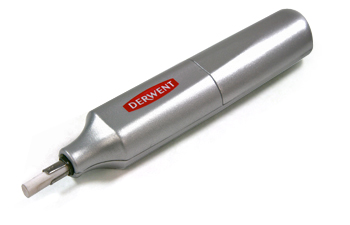 Again, there are off course many different styles, manufactures and variations of what is pictured above but that should give you a good sense of what is out there.

1
Erasable blue pencils for sketching?
3
What are the basic differences between vinyl, normal (less expensive), and plastic erasers?

11
Do I need to hold the pencil in different ways for different kinds of shading methods?
11
What eraser can I use with wax core coloured pencils
5
Shading dark scenes
5
Am I going about learning to draw the wrong way?
1
Drawing a newborn baby
1
When drawing shapes made from overlapping spheres, how should I draw the lines that indicate curvature near the intersection?
3
What are foam erasers?
4
Does creating lighter shades from darker pencils actually increase the chances of it getting smudged and smeared?