Why is this painting with Link from Ocarina of Time funny or ironic? [closed]

Ask Question
Asked 3 years, 7 months ago
Active 2 years, 5 months ago
Viewed 179 times
1
Closed. This question is off-topic. It is not currently accepting answers.

There is an artist in Buffalo named Dave Pollot who takes famous paintings or works of art and inserts characters or cartoons in them to make them funny. I got this one for my husband: 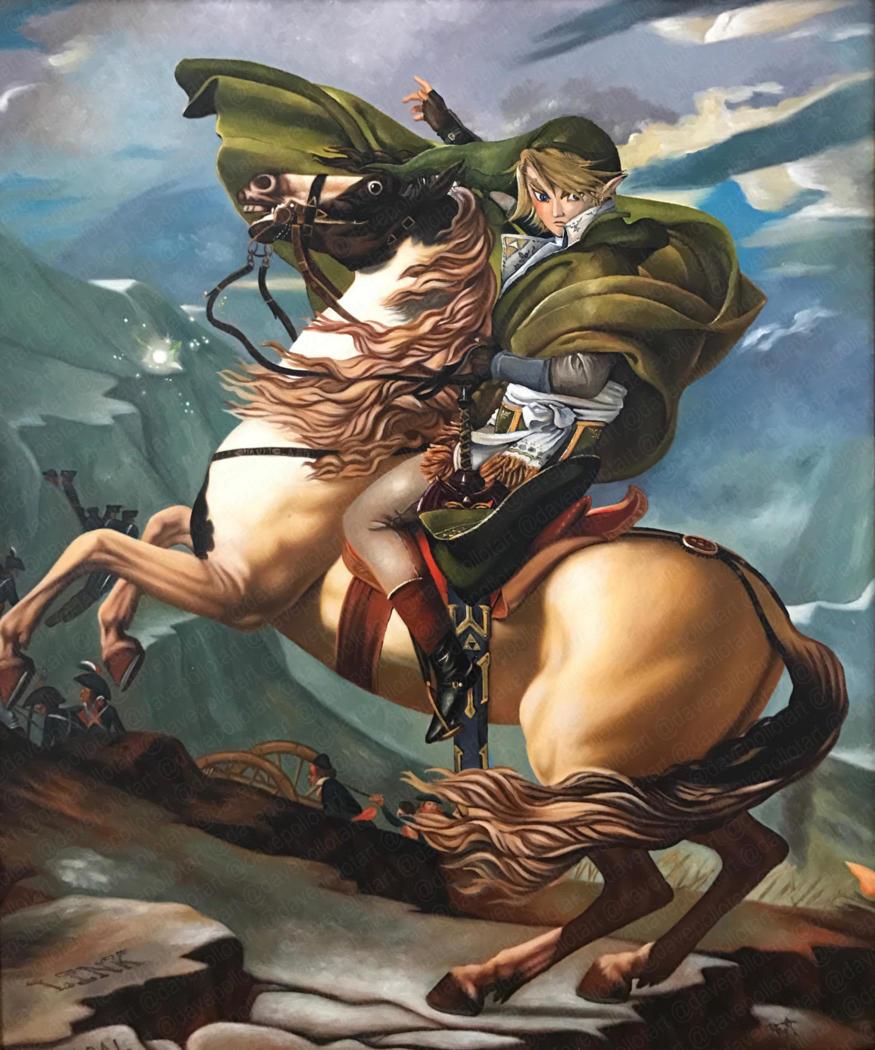 I don't know a lot about art or video games, but I do know this is Link from the Ocarina of Time, a game my husband likes. I'm thinking of getting him a framed print of this because I think he'd like it. But I don't know enough to know why this is funny or ironic like the artist's other works. Can someone help me out?

I don't consider it "funny". More interesting or "cool".

According to Dave Pollot's website, the title of the painting is Leveled Up. It features Link, from The Legend of Zelda, riding a horse with Navi over a reproduction of Napoleon Crossing the Alps.

Notably, Napolean refused to sit for the original set of paintings:

Sit? For what good? Do you think that the great men of Antiquity for whom we have images sat? ... It isn't the exactness of the features, a wart on the nose which gives the resemblance. It is the character that dictates what must be painted... Nobody knows if the portraits of the great men resemble them, it is enough that their genius lives there.

The Link version effectively captures the spirit of the originals, since Napolean's posture of victory is one modern viewers would associate with having just leveled up. If Jacques-Louis David had been a truly daring man, he might have painted something similar while attempting to convince Napolean to sit for him.

Not the answer you're looking for? Browse other questions tagged painting or ask your own question.

6
How to remove paint fallen on an existing watercolor painting with the least damage to the painting?
2
Are acrylic painting tutorial videos different from oil painting videos?
1
What is the name of this painting genre?
2
Breathable painting for acoustic panels?
4
How can the colour scheme of this painting be described (in technical terms)?
3
Time to paint over time
2
Painting a backpack
4
Painting from reference - use image as base or start from scratch?