I'm stuck on Step 70 of HOJYO Takashi's Buddha... what does the diagram mean?

I'm stuck on Step 70 of Hojyo Takashi's Buddha (the one in the 6th Tanteidan Convention book), and I don't read Japanese: 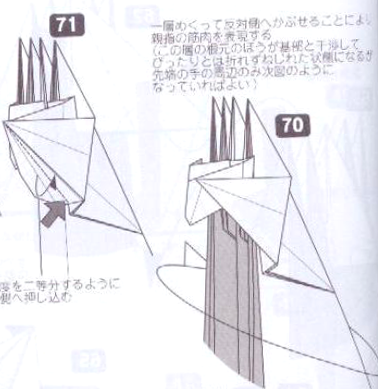 Clearly, from Step 71, I'm pulling paper around to cover the front of the wrist, but I can't for the life of me figure out how to flip the paper around and leave the rest of the hand the same. What am I missing?

Closeup of the Japanese text for the Step 70 description:

Doing Japanese OCR, hand-fixing the scanos, and running it through Google translate has been no help at all.

As you found yourself Google Translate was not particularly helpful in this matter:

By overlaying the more because What is the other side

` Ru to one representing the thumb of muscle

To SenWataru and ho stick base of Ne亢layers of trout

And using the camera-based Google Translate, we get:

I approached the users in Japanese.SE chat for help with this. This is a wiki since the work was done by broccoli forest who is a user over there. It was translated as:

Note though, by that users admission, he is not familiar with origami.

Not the answer you're looking for? Browse other questions tagged origami yoshizawa-randlett or ask your own question.

6
What is the right method to practice origami? Is rote-memorization correct method?
3
How does the step transition in this origami construction occur?