What makes the Hobbit Holes look so cosy? [closed]

Ask Question
Asked 3 years, 4 months ago
Active 3 years, 3 months ago
Viewed 189 times
0
Closed. This question is off-topic. It is not currently accepting answers.

I'm trying to identify what it is about the Hobbit Holes, as seen in Peter Jackson's films, that makes them look so extremely cosy, but I have almost no knowledge about interior design or design in general, and I'm struggling to identify the key concepts.

So far, I looked at a whole bunch of screenshots from the movies, like the two examples below, but I did not manage to extract the design concepts from them. 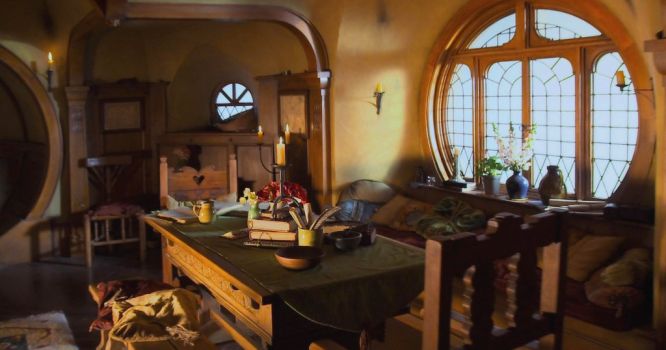 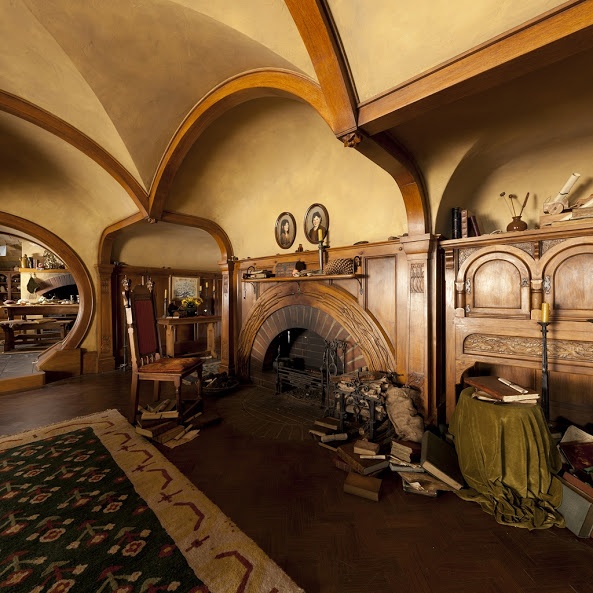 I also searched for concept art (which I were also willing to pay for) in the hope to get some more info from the designers (I was looking for John Howe, Alan Lee and Ted Nasmith, did I miss someone?), but the artbooks seem to feature mostly creatures and/or weapons.

Also Tolkien himself seems to know how to create a cosy-feeling description, but I can't tell what exactly makes this feel cosy either:

"It had a perfectly round door like a porthole, painted green, with a shiny yellow brass knob in the exact middle. The door opened on to a tube-shaped hall like a tunnel: a very comfortable tunnel without smoke, with panelled walls and floors tiled and carpeted, provided with polished chairs, and lots and lots of pegs for hats and coats--the hobbit was fond of visitors. The tunnel wound on and on, going fairly but not quite straight into the side of the hill--The Hill, as all the people for many miles round called it--and many little round doors opened out of it, first on one side and then on another. No going upstairs for the hobbit: bedrooms, bathrooms, cellars, pantries (lots of these), wardrobes (he had whole rooms devoted to clothes), kitchens, dining-rooms, all were on the same floor, and indeed on the same passage. The best rooms were all on the lefthand side (going in), for these were the only ones to have windows, deep-set round windows looking over his garden and meadows beyond, sloping down to the river."

Nonetheless, I would assume that people who know how to create such cosy interiors, have, besides the talent and intuition I lack, a bunch of concepts that are articulable and not a professional secret. I just don't manage to extract them from the pictures and descriptions, while there are other places, which are not Hobbit Holes, but are clearly built in the same style. I think those two below are from the Green Dragon Inn. 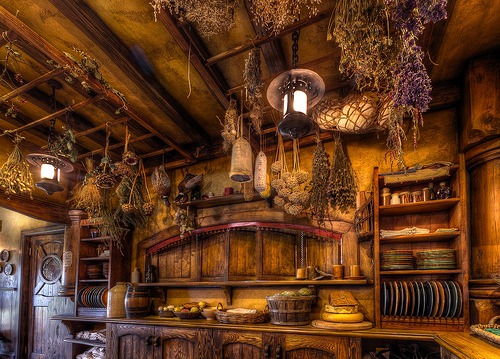 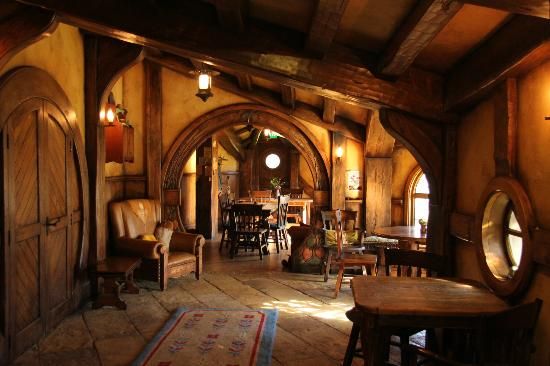 Sure, those places use a lot of wood, light and dark brown tones in general, have a cave-like shape, feature a lot of small details and ornamentations and so on. But this knowledge is not enough, at least for me, to imagine how I could adapt the style to create something on my own. And by creating I do not necessarily mean a physical creation, so far I would be satisfied, if I were able to look at a place and to have just an idea of how this place could look using this style.

Keep in mind that “cosy” is a subjective term.

I would describe the style as ‘rustic ’.

I’d assume the cosiness you have in mind has to do with the lack of sharp edges; the soft warm colours of the furniture and walls; the scattered, dim soft and warm light; the wood (apart for the warm colour it keeps warmth in and does not resound as much as other materials); overall natural materials; all the little things scattered around, which seem to have been there for a while, probably generations.

In addition to the elements mentioned in User18849's excellent answer, I think the simplicity of each element (in terms of usability and function) and obvious quality of everything, greatly contribute to the apparent coziness.

This hobbit hole is an unintimidating space where you don't have to worry about figuring out how to use anything, nor that you might accidentally break an element because it is flimsy or cheap. This is a space that can be lived in without effort or disproportionate carefulness.

Additionally, the walls, doors and even the windows seem thick and solid; which reinforces a sense of safety from the dangers outside