I bought 100 normal popsicle sticks with the idea that I could submerge them in almost boiling water to model them into a viking ship. Before I give it a shot, is there anything I should be aware of? Do popsicle sticks easily splinter? Is there a better alternative for this?

I was planning on 1 - 3 popsicle sicks for the keel by first shaping them after being in the hot water. Then, I would glue and clap them in position for them to dry. I haven't thought of what I would do with the sides yet, but I will probably clap them in some way to retain the curve then just glue it all together.

So, is this easily possible or should I be going about this differently?

On the assumption that you're going to try and mimic the clinker-built (that is, overlapping planks) construction of the real thing but not smaller details such as the riveting of planks together with trenails, then you should be able to use popsicle sticks for the planking - as you said you'll want to shape them with hot water (or better, steam) to get the correct shapes.*

Where you'll struggle with popsicle sticks alone are the large, complex shaped timbers like the keel, bow/stern posts and keelson. For these I'd recommend buying some larger pieces of basswood and carving them to shape rather than sticking popsicle sticks together. You may also find it easier to carve the frame timbers from basswood also. 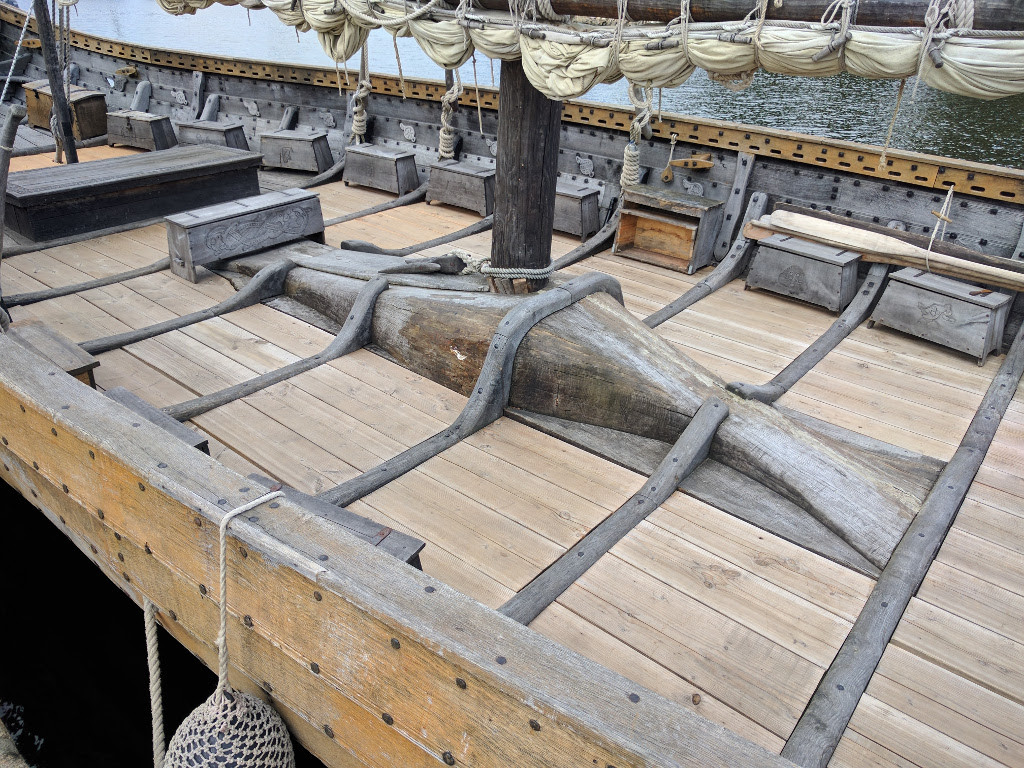 For reference, this is a picture of a longship I took last year, showing just how huge the keelson is.

*I suspect that the popsicle sticks are too brittle to attempt riveting or similar (the wood in viking ships was usually worked green not seasoned), but if you're just glueing them together they may be fine

1
What are possible sources of wood pieces from for making musical instruments?
4
How do I cut a popsicle stick lengthwise?
3
Staining wood blue with chemicals
6
How to deal with the burnt edges of laser cut MDF?
4
Soldering iron to make holes in sticks?
2
How do I get reddish scorch marks with a laser cutter?
1
Which paint and glue to use for a golden walnut?
1
How to lubricate toothpicks for model building?
1
Learning to work with a rotary tool
3
Is it possible that the wood used in newer pencils could be a bit better than old ones from same series? Or wood could degrade with time?