How to make this string art?

I found the adjacent image here, and want to learn how to make this: 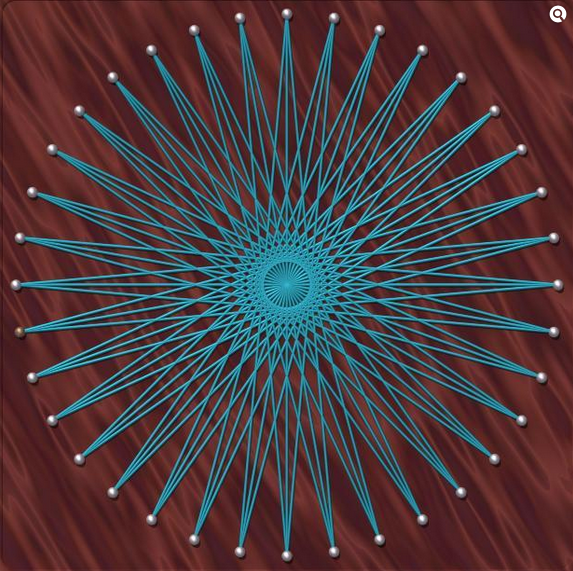 It seems like every pin/bead is connected to only three opposite. So I guess the job is to divide the circle into the number of beads/pins and to connect them using only three strings per each :) 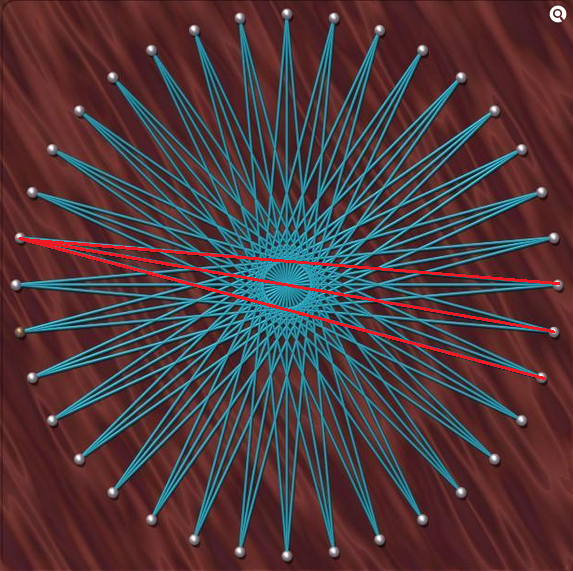 I suspect that the string goes through holes in the backing where the pins/beads are so the string also travels on the back side of the pattern which is what allows you to have three strands going to one point.

I further suspect that the 'beads' are ball ended pins which also go through the same holes.

Demigod's answer describes the pattern in the picture. There are 36 pins (10° increments around the circle), and each pin is connected to the diagonally opposite pin plus the pin adjacent to that on each side of it. That is the entire pattern.

As people have pointed out, three connections on each pin is a complication, but there are several ways to do it:

One thing to keep in mind is that even thread has thickness, which becomes important on a pattern like this where dozens of strands are on top of each other close to the center. A thick wad of strands interferes with the threads or strings forming nice straight lines. In replicating the pattern with actual strands of something, it becomes very difficult to keep the pattern clean and uniform. And even using thread instead of string, the center will have a bulge and won't look flat like the picture.

This type of string art was actually fairly popular about 50 years ago, and there were many classes and patterns available.The idea, though, was that you might start with simple practice patterns, but as you become more experienced, you would create your own patterns; thereby graduating from "crafter" to "artist".

These days, you can find many patterns online e.g. this type of thing: https://www.guidepatterns.com/35-string-art-patterns.php

You may not find that exact pattern online, and in fact you probably won't; as the pattern would usually have even numbers of lines around each nail, as the pattern forms by wrapping around each nail. It is actually possible to make that pattern, but not much fun, fairly mechanical, and with no surprises. One of the things to keep in mind about that particular pattern is that making it in reality would require some knotting and or sewing together of the lines as well, not just wrapping around the pegs/nails. Otherwise it will tend to clump instead of staying nice and symmetrical. Also, as mentioned in the comments below, you can't do it with a single string, unless you "double-up" the central string, hiding the first pass under the second.

But if you want to learn the craft/art, you should start with simple patterns, like this one below, (specially done in different colours here to make it easier to follow). 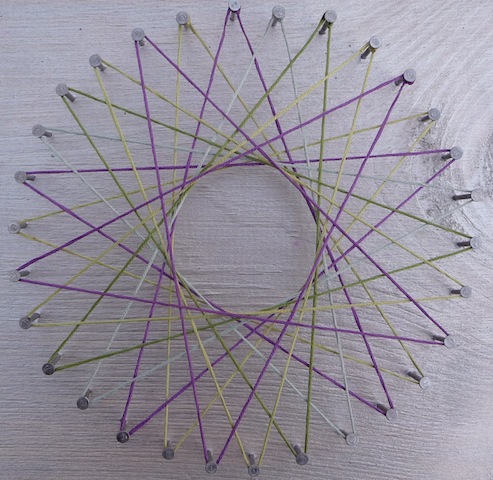 Generally, you plan out your pattern on paper, to figure out where to put the nails in the board. You then place the nails, tie the end of the string to your starting point, and start stretching the string from nail to nail, wrapping around the outside and continuing to the next nail in the pattern.

Contrary to some of the answers elswhere, you generally use only one string, unless you want different colours.

This is an actual string art, not an illustration. Those are nails and they are using an embroidery string. She is showing you how to make that pattern. There are people doing classes all over, check to see if there are any in your area, they are a lot of fun.

Not the answer you're looking for? Browse other questions tagged string or ask your own question.

6
Is there a good technique or tool to keep long macrame threads from getting tangled?
3
Chirality-neutral string
6
Attaching a piece of wood to a necklace without drilling
4
Evenly spaced increase
6
How can I prevent my pom poms made by fork method to not look separated in the middle?