A great example of this is the box art for Metal Gear Solid V: The Definitive Experience (see image below).

I've seen it used sometimes on movie and video game covers, but never knew the name of it. 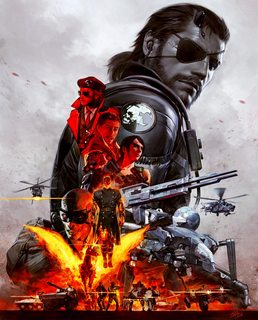 It's a form of hierarchical proportion:

Hierarchical proportion is a technique used in art, mostly in sculpture and painting, in which the artist uses unnatural proportion or scale to depict the relative importance of the figures in the artwork.
source

Larger figures in these images play a larger role within the context, have a higher value or authority, are wealthier, more powerful, &c.

It has been used throughout the history of the visual arts:
Well-known examples include religious depictions (e.g. Madonna with Child, the Last Judgment), societal depictions (where those with higher ranks or power are relatively larger, such as family group sculptures from ancient Egypt, or the donors of an artwork), depictions of royalty (think about Egyptian reliefs, or the Stele of Naram-Sin), and narratives (like posters of Star Wars).

Images of this style often appear in advertisment, Propaganda and to some degree religion. Basically this style is employed to promote an Idea or a Person. You might want to look at Keywords like 'Heroic Realism' 'Social Realism' which describe the style of Painting employed in 20th century Dictatorships - especially for propaganda (search phrases 'Soviet Propaganda', 'Heroic Realism propaganda')

Early examples of this style appear already frequently in Religious paintings of the early and high middle ages and can be found in every epoch.

However, I think it is not possible to name a specific style of paintings as what you are looking for is more of a compositional technique to highlight the importance or power of something or someone.

To put it simply, it’s just Yoji Shinkawa’s way of drawing. It’s something he grew accustomed to, it’s not so much a style.