How can I sharpen a round leather punch?

I'm using leather punches to cut polypropylene film, but the round one isn't sharp enough to do a nice job. The film cuts nicely with a scalpel or scissors but I need 5mm discs (with a 3x2mm hole in them, cut using the rectangular punch, or a more complex cutout using a scalpel).

The rectangular one also needed sharpening, but this was easy -- a small diamond file and an approach like sharpening a chisel. 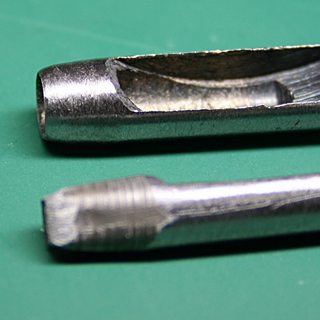 But I just can't get a good edge on the round one. I don't know if I'm having trouble holding it at a consistent angle, or what the problem is. I I've got sharpening stones, a diamond file, and various abrasive sheets.

Is there a trick to sharpening small, hollow, round, steel things like this?

The approach is the same. You remove metal from the outside of the periphery of the punch end, at an angle roughly the same as it was originally.

The contour of the round punch adjacent to the cutting edge looks rounded in your picture. This makes the edge stronger, but makes it trickier to get the sharpening angle right when using a flat stone. The punch won't get sharper unless you remove material right up to the opening, producing a keen edge.

You'll have to pick your sharpening angle (I'd start with 45-degrees) and stick with it until your grinding marks meet the opening. With something like this it's sensible to mount the punch in a drill or drill press and use the stone against the edge while it's rotating. Best results come from holding a consistent angle, which is easier when the drill or other rotating device is fixed to a bench or whatever, not hand-held. I suppose you could try holding the stone fixed and run a hand drill guided by hand, but avoid holding both in hand.

If you're brave and have a steady hand, you could try using the hand-held drill approach against a a bench grinder or belt sander instead of a stone. Only problem there is when things go wrong the go wrong quickly. Might be something to work up to once you've gotten a feel of how it works against a stone.

the drill press is a good idea for being able to get the same angular cut or grind on the tool in question I would also suggest getting some needle files. you can usually pick them up at Harbor Freight for a dollar or two if not you might be able to roll up some fine grit sandpaper small enough to where you can get it to fit the inside diameter of the tool. and depending on the thickness of the material that you're cutting you might find that a different or slightly different angle cut might last longer and give you a better finished product.

5
How can I make a regular corner punch from a fancy one?
5
Is there an easy way to sharpen a wire loop carving tool?
5
What can I do to make my simple hooks more comfortable?