I want to make attractive signs to point to the locations of fire shelters for our community, in a fire-prone area. I want something that would be visible to rescuers after going through a bush-fire of 1000 degree celsius or so.

The simplest approach would be to cut the signs out of sheet metal. But I'm wondering if anyone has ideas for materials that might retain color?

Since fire coats the things it can't destroy in black opaque soot, it doesn't really matter if the colors underneath survive... they won't be seen until after someone cleans the sign, after the fire is over.

I would suggest using the sign's shape to convey its meaning. That way, even when it is totally blackened and silhouetted against a wall of flames behind it, its meaning will still be clear. 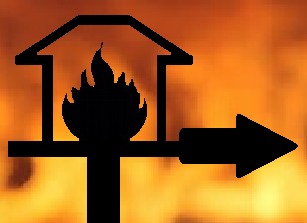 As for material suggestions, I would consider aircrete ( a mixture of concrete with a foaming resin ) which is extremely fireproof. Also, there are a lot of additives that you can add to concrete (and by extension aircrete). Gypsum or Quartz powders will make the sign reflect flashlight beams. Dyes and colored stones can be added to increase the sign's unsooted visibility and some to those dyes absorb sunlight and glow in the dark. The sign can either be made relatively attractive or garishly noticeable with very little additional effort.

Steel is cheap and easily laser- or machine-cut (because it's so common, any machine shop can handle it). It's about as fireproof as anyone is likely to need (woodburners are often made of it). Stainless is nice but plenty of grades of steel will only form surface rust for many years in most climates. You can blacken stainless steel or contrast stainless with blackened mild steel to get monochrome patterns, but the masking might be interesting.

Not the answer you're looking for? Browse other questions tagged material-selection .

6
Materials for pictures that change with the direction of sunlight
10
Best materials for a long-lasting scroll
6
In what technique medieval book miniatures were executed and are there materials today for doing this?
6
Wood used for Christmas Colored Flame Yule Logs?
1
Mice/hamster chew proof plastic material
1
Materials for an easy to make knife handle?
0
A cork tree made of other materials?
2
I want to make antlers for a costume, what materials should I use?
5
Different materials that can be used for origami
4
Materials for inflatable structure