How can I efficiently make the loops for chain mail or small chain crafts?

You see loads of people make their own chain mail. I can only assume they have some process with which to make the loops to make the process less tedious. There are loads of tutorials out there but some assume you already have the loops for the project. 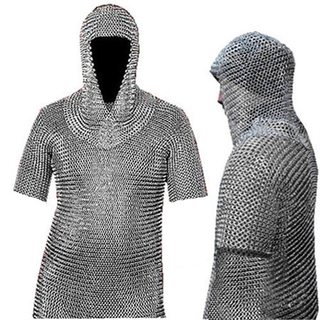 Assuming I already have an appropriately gauged wire of a proper material how can I process it to create the thousands of loops/ rings required for a suit of mail? A starter project, that might be easier, would be a chain mail dice bag or diaper cover for my young one! That sounds less frustrating and more realistic to finish.

When I took jewelry making classes, we used the saw method mentioned in Kellerra's answer section "the slow way".

You start by wrapping your desired wire around something round like a dowel to make a "spring" of circles and then you cut them apart with a saw.

The best setup I found was to have something... either a dowel or steel bar... with a notch cut in the end as a "guide" for your saw blade with the far end held in a giant clamp attached to a table. Here's an image I found that shows what I'm talking about: 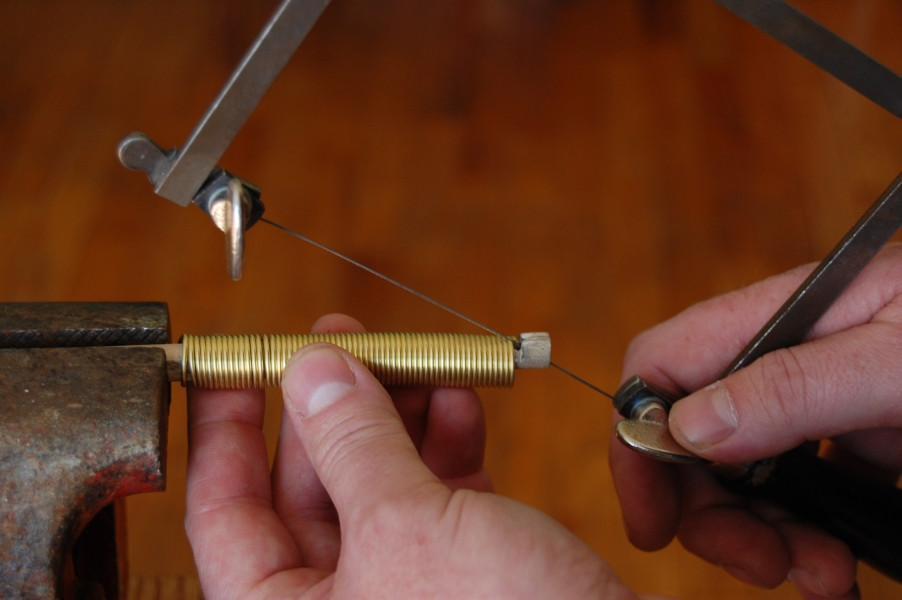 Use tension in your off-hand to pull the rings towards the blade notch... note that as you cut through each ring, it will drop, so you want something to catch them unless you want to spend an hour finding where they rolled on the floor.

The saws are pretty easy to use once you get the hang of them... but you will probably break tons of blades when you first start out because you're going to have to figure out the right amount of pressure to use that will cut the metal without snapping the blade.

And, once you get used to the saw, this is actually pretty fast. Granted, it's not as fast as some of the machined methods which, if you're really that interested in speed and you can afford it, are a good option... as is simply buying the rings premade, which isn't as expensive as you might fear if you buy in bulk, though it is more expensive than buying the wire alone.

I think you'll find the cuts to be quite a bit cleaner with this method than with a lot of other methods around, particularly using wire cutters.

there are a few ways to make rings/loops on your own. If you're just starting out you might want to consider buying ready-made rings in the appropriate size and gauge in a project kit. You would be surprised at how many rings even a small project like a dice bag will require.

Just to get this out of the way, (and from personal experience) if you're going to cut rings wear eye protection of some sort, and not just your normal glasses.

First create a coil of wire around some kind of cylinder. I actually have "jump ring mandrels" that fit into the chuck of a drill so I can wind massive amounts of wire if I want to.

It also bears mentioning that with any cutting method used there might be little burrs at the wire ends where they were cut. If you don't want little burr ends catching and snagging on skin, clothing, etc., you probably need to file all those little rough ends or tumble polish the rings to smooth them out.

I'm not a jump ring expert but I've made a lot of jump rings by hand (and I still do) and I've finished a few maille pieces. I might have missed something and hope someone can add to what I've mentioned.

Get a dowel in the diameter you want, drill a hole in one end and put the wire in it, attach the other end to the chuck of a drill and press go! Make sure its operated slowly.

Don't take the spring you made off the dowel at this point. Take a dremmel and just cut down the side. If you are making tonnes, you might want to make a jig to make this faster.

Not the answer you're looking for? Browse other questions tagged tool-selection wire chain-mail or ask your own question.

5
How can I quickly and easily pencil in guide and slant lines for lettering/calligraphy?
6
What wire other than 1.6 mm stainless will work for chain mail?
2
How can I recreate/restore small text and graphics on a painted surface?
6
How Can I Create the Metal Comb of a Music Box?