What is the purpose of an underpainting?

As I got interested in painting in oil and acrylics (and other covering techniques), I came across the term 'underpainting', i.e. a painting under the actual painting, that sometimes exhibits color, and sometimes only the tonality of the image to be.

It seems that the underpainting is almost always completely covered once the painting is finished. So what is the purpose of an underpainting when you could also directly paint on the real image (supposing that I sketched out my design with graphite or charcoal)?

I use under painting for a variety of reasons.

Conventionally, it is useful for extremely faint variations in color, implied-texture or reflectivity. In this respect, it is similar to adding a wash over a portion of the dominant color, as it subtly affects the final appearance without adding distinct brush strokes or delineations. I find under painting to be slightly easier to control than washes because the pigments which I use for under painting are less dilute and therefore quicker drying than their wash equivalents.

A less conventional usage is to mark the center point of a zone or to layout a grid upon an area which will ultimately be invisible in the final product, but is useful for determining proportions prior to the addition of the outer obscuring layers. For example, when laying down shadows which are being cast by multiple identical objects and at nearly identical angles to the light source, it is helpful to have an almost invisible grid (like graph paper) present. It helps me be more consistent and to adjust the angles with uniform variation between each of a series of shadow-casting objects.

My final use for under painting is for low risk experimentation. Laying out a rust pattern or a dirty spot on an otherwise pristine rendered subject is daunting. You've finally got the thing looking exactly like you want and now you just need to scuff it up a bit to make it look more real. But a little too much or even a little in the wrong spot will ruin your hard won rendering. These are the moments that make brush hands quiver.

Which is why I design my rust and scuffing before hand, to get it right before I add all the pretty paint and shine. Then, if I have to go back and strengthen the abused area after it has become too pretty, I have the still barely visible tone of the under painting ( or at least my memory of it ) to guide my hand.

The reasons I like to use underpainting when doing art in oil or acrylic are:

Underpainting (or toning) eliminates the harsh, intimidating white canvas and allows you to paint freely without worry about ‘filling in’ the white. Use a big brush to paint a wash of burnt sienna.

That's a quote from Seven Steps to a Successful Painting on the Thought Company website. Each step is illustrated and, I think, offers a foolproof approach. Underpainting is a crucial early task. Why?

It helps you identify the major values (darks and lights.) By identifying these, it forces you really look at your subject, and see if the composition will work.
As a beginner I had no idea how important values were until attending some well-run art classes. Wish I had known earlier!

I have included a sample of a still life and value study from underpainting, at yesterday's oil class. The next stage is to add colour. I have probably made mine too detailed, but that's okay. I got excited. 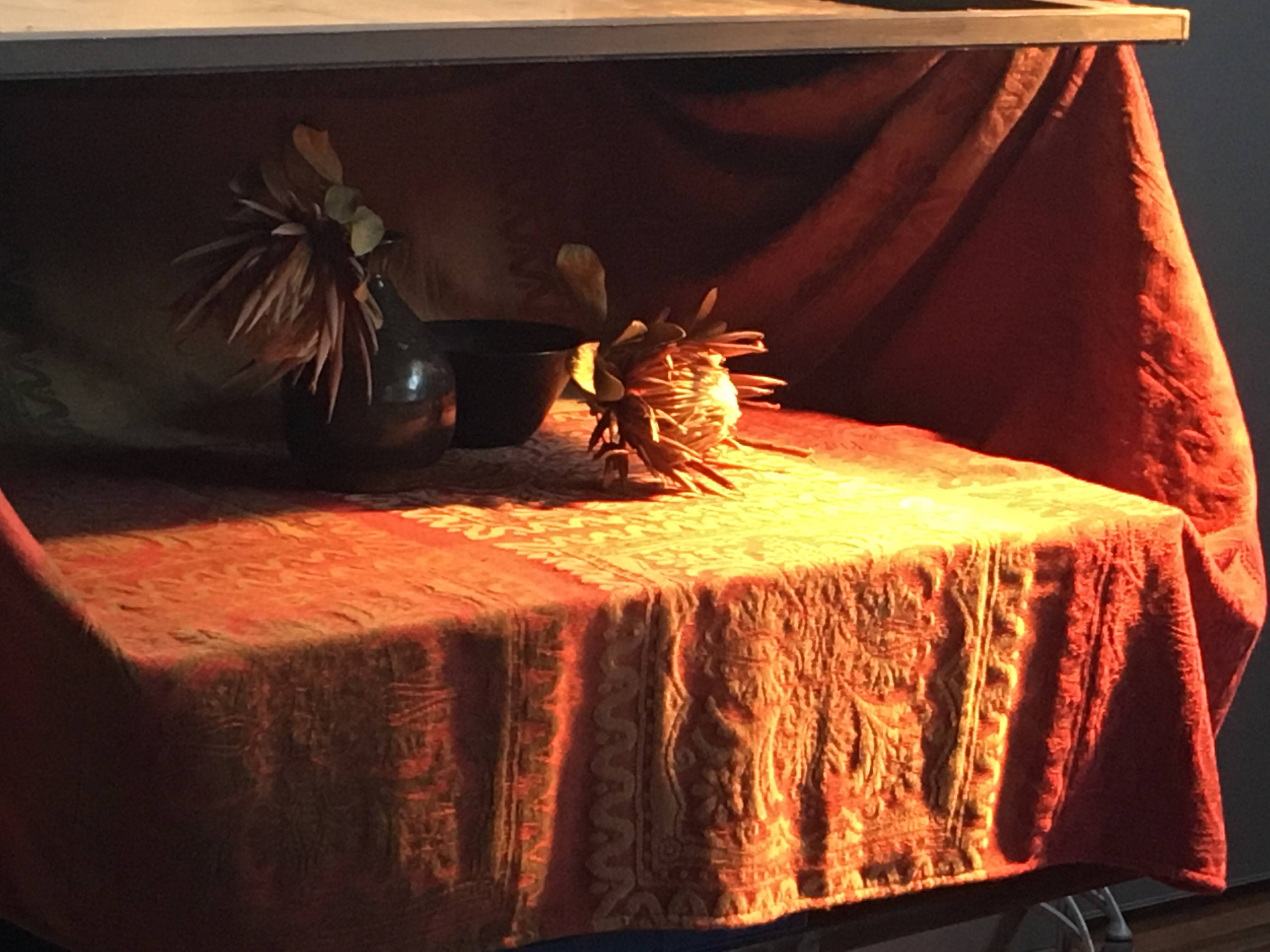 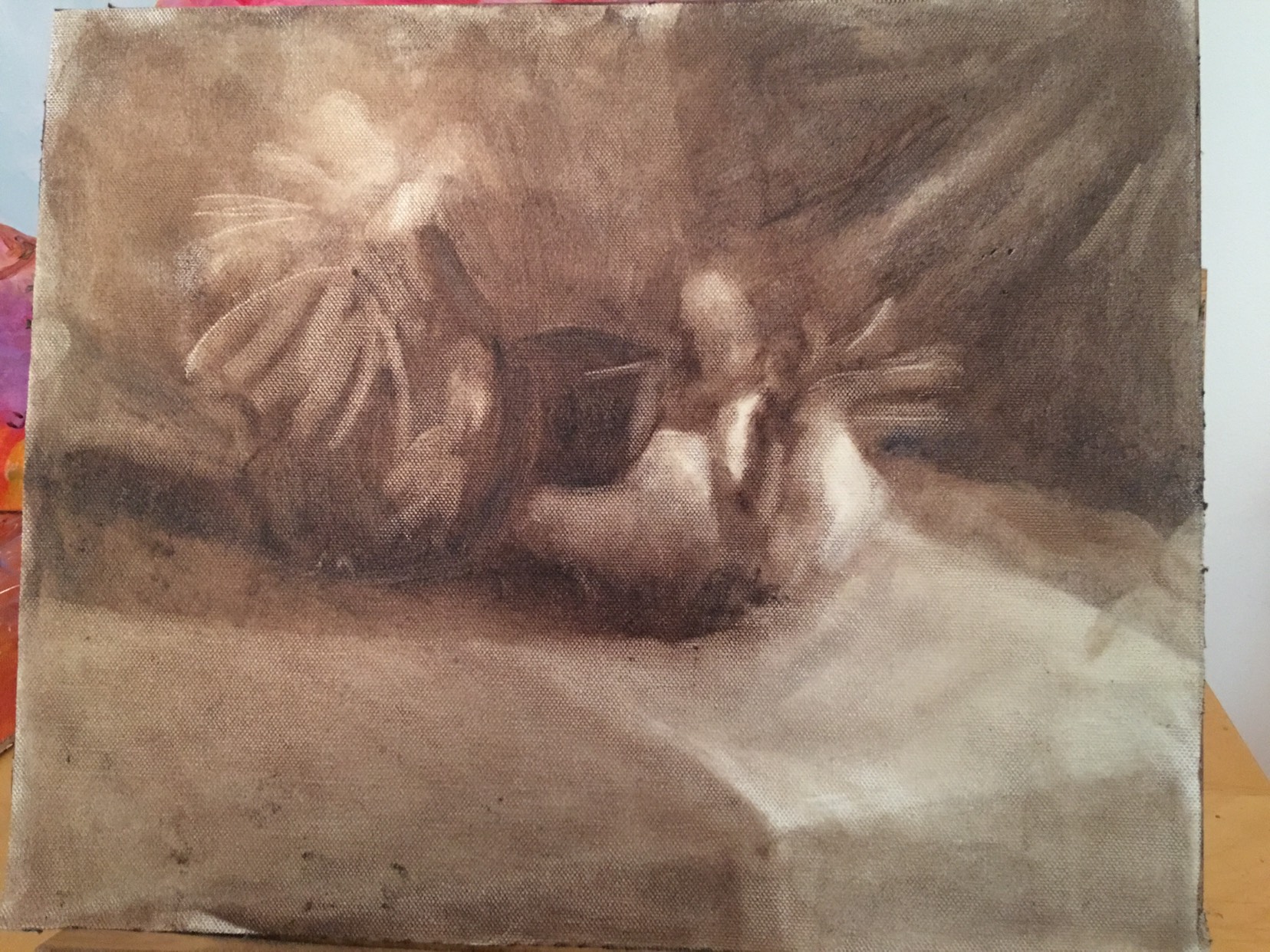 Mitchell Albala's website has an excellent discussion covering several ways to do underpainting (illustrated): What Color is Your Underpainting? The Monochromatic and Two-Color Methods

The underpainting is for glazing. You put transparent pure color very thinly over your underpainting, dry, glaze, dry, glaze. These thin washes add volume without eliminating or covering up the underpainting. If you use white paint with any colors, it's no longer translucent.

Not the answer you're looking for? Browse other questions tagged painting oil-paint acrylic-paint .

5
Using an underpainting and painting a gradient on top of another, with gouache

19
What is the difference between cheaper oil paints and more expensive ones?
3
What are the differences between paper intended for oil painting and acrylic painting?
8
Can I use the same brush for oil and acrylic painting?
3
Does the risk of lumps and clots reduces when moving from acrylic to oil paints?
1
What are the differences between different black oil paints?
4
How can the colour scheme of this painting be described (in technical terms)?
5
What techniques can I use to stop paint getting under masking tape?
5
Acrylics in the drain?
5
Using an underpainting and painting a gradient on top of another, with gouache
5
Best drawing material for creating an underdrawing on a primed and toned canvas