How can I affix keyboard keys to a suit jacket?

I have been collecting used keyboards for a while. Mostly to get the plastic circuit map underneath for making wallets and what not. Recently I ran into this picture of a suit made of keyboard keys: 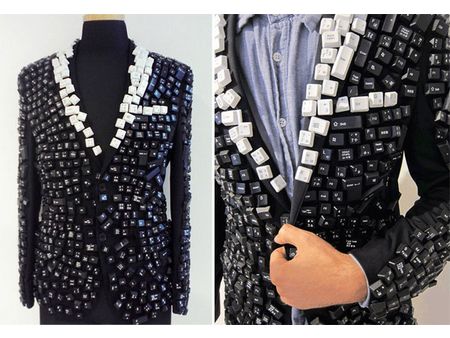 My problem is I can't figure out how the keys are attached to the suit. Most keyboard keys don't lend themselves well to be attached to anything other than the keyboard itself (obviously). If you look at the bottom of most keys there is not much surface area to work with. 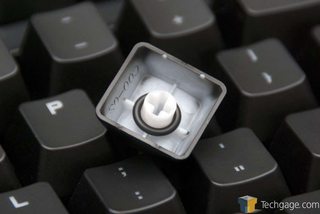 What can I do to attach keyboard keys to clothing. In particular a suit jacket like the one pictured above.

The simplest approach is a hot needle.

Hold a rather thick needle with pincers (pretty much any kind) and heat it up - stove fire will take seconds to make it glowing hot, but a candle flame should suffice. Melt the hole through both sides of the stubs. The needle should be considerably thicker than the one you'll use for sewing because the holes close up a bit when you remove the needle.

This will be untested, as I've never done such a thing, but I think my theory is sound.

I would take a rotary tool, such as a Dremel, with a fine drill bit. Then I'd drill two holes at a shallow angle on opposite sides of the key's center support. Do all four sides if you want to sew them more like 4-hole buttons.

From here, I'd recommend a curved sewing needle, except that they're too fat! So, instead, I'd use some pliers to give a small needle the curve you need to fit through the holes. Then sew away!

A problem you may run into is the assortment of keys you have. The ones you pictured are actually from a mechanical keyboard (in fact, the same exact model that I own), and so they have strong, uniform central posts. Those posts also have hollow centers, because the switch fits into them.

However, most keyboard keys you'll probably have will look more like this underneath: 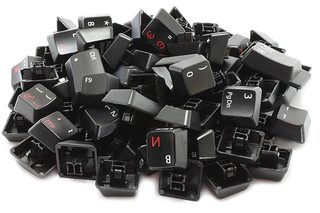 These are keys from standard membrane keyboards. They have posts of varying widths and shapes, and they aren't always hollow all the way through. Sometimes the post, like in the image above, will stick out beyond the key, which makes drilling easier. If not, it may be a little more difficult to line up the separate drill holes so that there's a clean path the entire way through.

If you look closely at the images, you'll see the keys seem to float above the surface of the jacket a bit. I don't see an evidence of the keys being sewn directly to the fabric with side-holes, although I agree it is a good approach.

I suggest sewing regular buttons onto the fabric and then gluing the keys to the buttons. Since they are both hard plastic, the glue bond can potentially be very strong, and the sewing is a little more straightforward since you can use familiar (or a least well documented) techniques for buttons.

I believe that sewing from the center helps give the keys their flexible, and random appearance.

Also, this is not the only jacket of its kind. Another artist, Jessica Latorre also created a keyboard jacket (image not inserted because her site specifically asks not to reproduce). The key density seems higher than the Julien David jacket, and the more rigid pattern looks like it could be glued or possible edge-sewn. I'd lean towards glue because it's in the "Prop Design" section of her website.

Image searches show pictures of each suit mixed up and attributed to the wrong artists. Julien David made the jacket with the white lapels, and Jessica Latorre's is all black.

Being someone who is always experimenting with new ideas on out-of-the-ordinary crafting / sewing projects such as this awesome one you have chosen, I have some thoughts. In this situation I would think about drilling into the back outside edge of the key button itself, perhaps just two holes, on each on opposite sides of the square. It seems to me that {a} the back edge would be much easier to drill into accurately than trying to get a decent hole in those little inner fins and tubes, and {b} edge holes would be much more accessible for sewing the keys onto a flat surface.

As with most projects, a huge percentage of success is having the right tools. I think in your case, it will be important to have a small clamp-on crafter's vise, such as this one, which is a model available at Etsy, and similarly should be readily available at your local craft store: 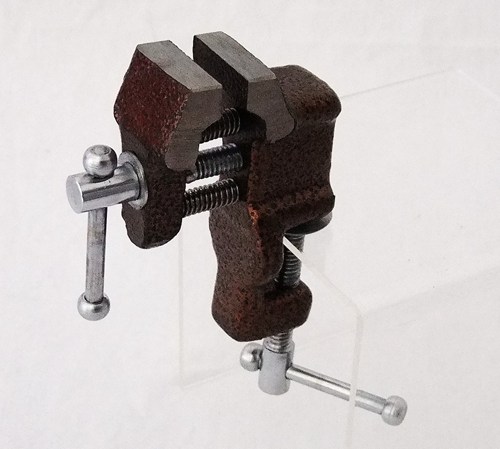 To safely drill holes in such small objects:

Thread choice will be an important consideration, and in this method would depend on how smoothly the edges of the holes end up to be. If they seem fairly smooth, I would just go with good old quilting thread. Light weight fish line or transparent nylon sewing thread could be a more abrasion-resistant alternative. The advantage of quilting thread of course would be the ability to match the thread color to the background fabric. Fish line being transparent could also be considered an advantage. The choice of thread would somewhat depend on your sewing skills for making the stitches invisible, and how invisible you feel the stitches need to be.

It is possible that sewing the keys to strips of fabric which match the background fabric, then attaching the strips to the garment, could be the most efficient way to apply the keys to the garment. Looking closely at Julien David jacket, most of the keys do appear to be aligned in rows, so this method might have been part of their approach.

I would be so interested to see what you end up finding to be the best method of attachment, and how your project turns out! I am new to StackExchange, so I don't know about such things, but I hope you can post some sort of outcome report with pics? At any rate, it looks like an extremely fun and creative project: happy sewing!

Not the answer you're looking for? Browse other questions tagged clothing upcycling .

11
How can I finish stitching those last few inches?
7
How can I splice the tail of my tie and have it not look terrible?
9
How can I add an internal pocket to pants that don't have one?
4
How can I make yarn from an old t-shirt and does the material matter?
9
How can I trace a pattern from a top with darts?
10
What materials can be used to fill a puffy jacket?
5
How can I attach a large satin applique to a skirt?
8
How to do iron-on transfers on a softshell jacket
2
How can I fully bleach a polyester shirt?
4
How can I completely clean an old candle container?