Are there any techniques established for doing perspective on a spherical surface?

I'm interested in the perspective of large objects, spanning enough distance that the spherical nature of the earth comes into play. 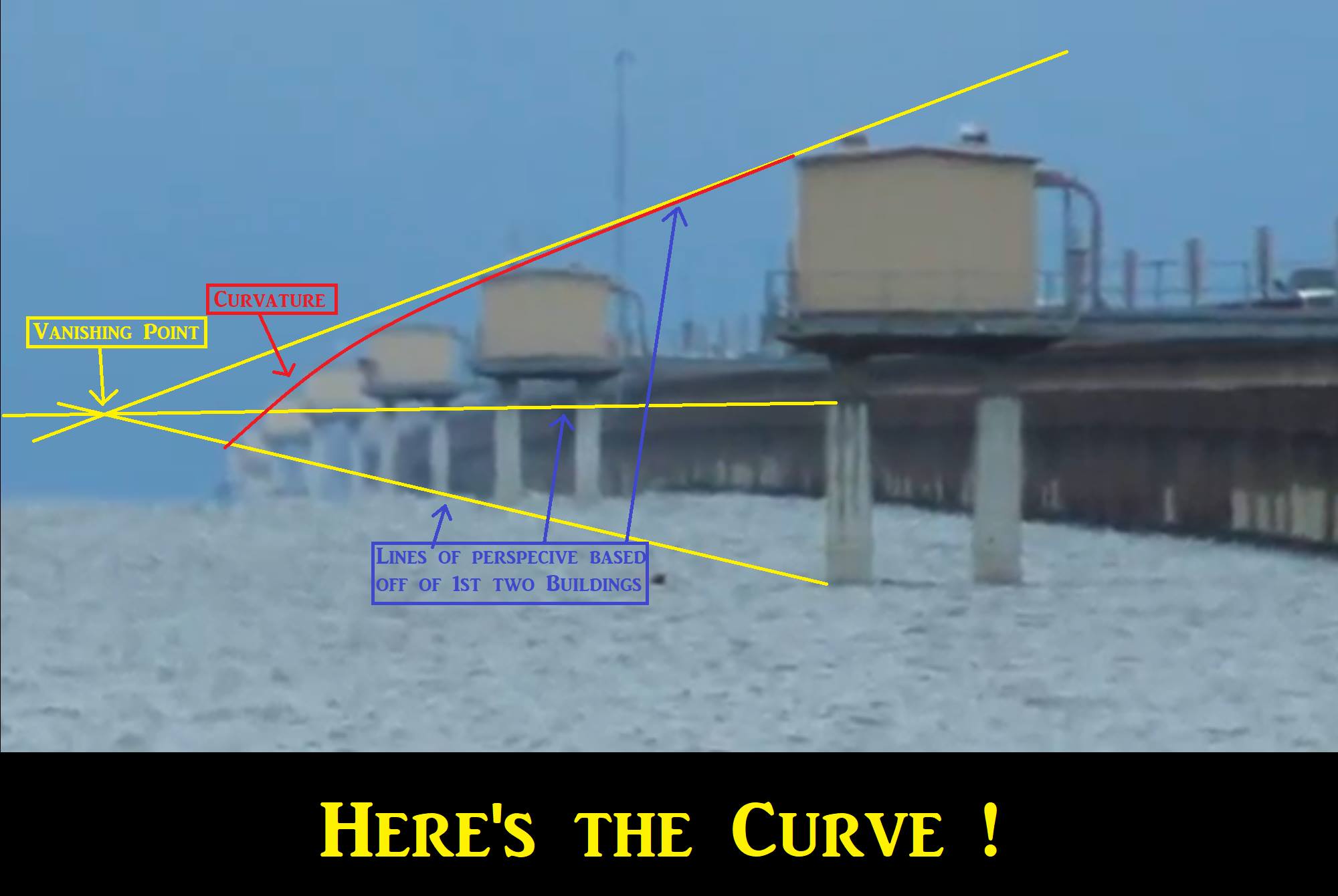 I think it is possible the curve you see above is because the ground is not flat (relative to the curve of the earth,) ie. there is a slight hill there, or the line of the shore is not perfectly straight. The curve of the Earth is so gradual you will not see its effect from the ground. So unless those shacks are over 2000 feet apart the horizon is not 2.9 miles away in this image. Keep in mind the camera lens has a big part in how distorted the perspective becomes. Think of a picture from a fish-eye lens.

However, to get the kind of perspective effect you are talking about, where you are fitting an exaggerated perspective onto the drawing plane, you would use curved lines. This is called Spherical or Curvilinear Perspective. M.C. Escher is a great artist to study to see this technique in action. The fish-eye lens distortion previously mentioned is a perfect example of spherical perspective.

The wikipedia entry for Curvilinear Perspective is a bit dry. But here is a nice artistic perspective on it, pun intended.

I will go ahead and not provide a final answer to your question; I just take it ahead a bit, so that others will have a clearer image of what you are asking, and maybe then they can help out with the final answer.

Your system can be modelled with a series of small cubes (like sugar cubes, or dice) aligned neatly in a row, glued to the center-line of the curved surface of a toilet paper roll.

Even when aligned with each other, each of the cubes will stand at a different angle (their bases aligning tangential to the curve of the roll). Thus, they will not share the same linear perspective system among each other. If you want to make a drawing of this scene, you will need to establish separate, dedicated perspective systems (with corresponding "horizons" and vanishing points) for each small cube.

By the first sentence in your question, I imagine you could be a fantasy or sci-fi artist.

You might want to paint a picture that depicts a series of stout pillars, or even "skyscrapers", that are 100km tall, and are spaced 200km apart (at their base) from each other. On a clear day (or if you rise above the Stratosphere (where the hazy part of our atmosphere lives)) you will get to see several of them as they file their way beyond your horizon, and gradually disappear behind it.

(Just to emphasize: 100km altitude is also the "Kármán line", the defined altitude where space "officially" starts. These imaginary skyscrapers are so tall.)

We need to talk about two kinds of horizons here.

One is your horizon, in other words, where it appears to be, from your vantage point: the very line where the surface of the Earth and the sky meets. (Officially it's called the apparent / true horizon (see illustration).)

The other kind of horizon is a "theoretical", or relative one. It's a bit like the yellow line that you drew in your picture. It's not where you see the horizon. It's where a selected object seems to project its "own horizon". It's "where it should be", if the surface would go on flatly into an infinite distance. (I think this is labelled as astronomical horizon in this illustration.)

It's time to address how you tried to use two neighboring objects to find a horizon. On the scale of our mega-towers example, you can't rely on a system where some towers are grouped together. At this scale, Earth's curvature is significant enough to make each tower stand at a different (unique) angle on the curving surface: the deviation between each of them is so significant, that we need to maintain an own dedicated perspective system for each of the towers.

You can position yourself such way that you can match your "personal horizon" with one of the towers'.

You need to take a helicopter, or an airplane, or a space elevator.

Using the website called Distance to the Horizon Calculator, we can see that if you rise 2km above the Earth's surface, then a tower 160km away from you will stand right on your perceived horizon, while in its own dedicated perspective system, its horizon (yellow line) will overlap with your perceived one. And these overlapping horizons will cross the building at its ground floor; you will still get a frog's perspective if you look upwards to the upper floors.

In this system, each tower's own horizon (yellow line) ends up in a different "height".

It's worth pointing out that anybody who is not considering the Earth's curvature, will use the closest tower's dedicated horizon as reference where they set the perceived one, and they will go ahead and match every other object's horizon with this same reference.

Not the answer you're looking for? Browse other questions tagged linear-perspective or ask your own question.

15
Determining a station point for a perspective drawing
3
Is it possible to paint an oblique (perspective) anamorphic illusion on a three dimensional surface viewable from all angles as you pass it?
2
Is there a known method to track perspective without guidelines, other than experience?