Ask Question
Asked 4 years, 6 months ago
Active 6 months ago
Viewed 3k times
3
This question already has answers here:
How can I remove paint from glass bottles w/o paint thinner? (5 answers)
Closed 4 years ago.

I'm planning to use recycled Corona bottles to pack some juice I'm producing, but to put my own logo on these bottles, I want to remove the original printed brand. In my city, and even in my whole country there is no recycling plants so there is basically nowhere to get help.

I tried using paint thinner, paint remover, acetone, and brushing, only the last one worked but the bottle was unsuable after that.

So, the question: HOW TO REMOVE THE PRINTED BRANDING IN A CORONA BOTTLE? 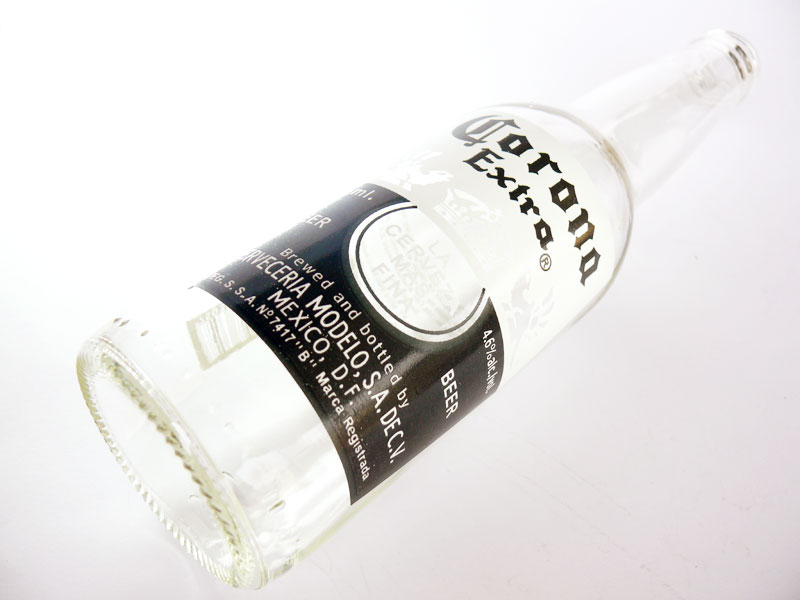 A commercial paint remover of sufficient potency may solve your problem, although great care should be taken in handling and use. A friend runs a shop using aircraft paint removal chemicals. Once applied and placed in sunlight, the paint bubbles and scrapes off easily. The same chemical burns like a match if even the smallest drop touches skin.

Perhaps slightly safer and possibly as effective would be automotive brake fluid. Every bottle of the stuff has warnings about damage to paint, although there is a possibility that the silicone based stuff would not be as damaging. A quick Google check shows that silicone based brake fluid DOES NOT damage paint.

I took an 18-gallon plastic tub and stood clean/empty beer bottles upright in the bottom until there was no room for more. I then filled the tub with water from the hose and of course, the bottles all tried to float. One by one, I pointed the hose into each bottle until it filled and sank. Once the water was above all of the bottle openings, I poured in about 2 ounces of StarSan sanitizer (which is available at most home brew supply stores).

Then I put the cover on the tub and left it that way for about a month.

When I opened it up, all of the paper labels were floating on top. Some of the bottles which had hosted those paper labels still had a little glue on them, but that glue rubbed right off with finger pressure.

The (corona and sol) bottles which had not had paper labels still had a little of their original ink on them but again it came off with either finger pressure or under an old tooth brush. I used a razor blade on the tough spots but soon had about fifty bottles which were almost ready for use.

Just to be careful, I ran them all through the dishwasher then dipped them in a fresh batch of starsan and let them air dry.

I have no idea if starsan could have cleaned off the bottles quicker than the one month that I gave it. I chose that time because that is how long I let my beer mature in the carboy before bottling.

One word of caution. Several of the bottles which I carefully prepared for reuse had screw-on caps. When I resealed them using a manual capper and crimp-on caps, the seals were not airtight and the beer never carbonated. The little glass ridges, which help the screw-on caps stay in place, ruin the seal for crimp-on caps. Only use bottles which have smooth openings at the top.

I have posted this question on HomeBrewing SE site at the same time I did here, and the problem has been solved. I wanted to share the answer for anyone who can find it useful. Thanks for your answers. This was the solution for me:

Hydrochloric acid alone worked perfectly, the bottle was put into it for less than 10 minutes, and after that it was rinsed with water (almost no rubbing was needed) and everything was removed in less than 10 seconds.

-The part of paint remaining on the top, was not inside the acid.

-The bottle itself was not affected. It's still shiny and without a single scratch after the proccess.

-The paint doesn't disintegrate inside the acid, so the acid could be used multiple times.

You can see the result here:

Not the answer you're looking for? Browse other questions tagged paint glass upcycling or ask your own question.

7
How can I remove paint from glass bottles w/o paint thinner?

9
How can I affix keyboard keys to a suit jacket?
19
How do I cut the bottom off a glass wine bottle?
25
How do I remove labels from glass jars/bottles?
7
How can I remove paint from glass bottles w/o paint thinner?
5
How to remove water-based paint?
7
Is it possible to melt a glass bottle without a kiln?
6
How should I fix a large mirror ball with many cracked mirrors?
4
How can I completely clean an old candle container?
3
How to remove oven baked acrylic paint from glass used for drinking?