How can I cut a near perfect circle out of a plastic bottle?

I am hoping to make a simple spinner treat dispenser for my Australian shepard. Basically it is plastic container with a rod/dowel suspending them in the air. Treats or food are put inside and the weight holds the bottle down. If the dog uses sufficient force the bottle will spin around and some treats will fall out. There are many different overall designs but it basically looks like this: 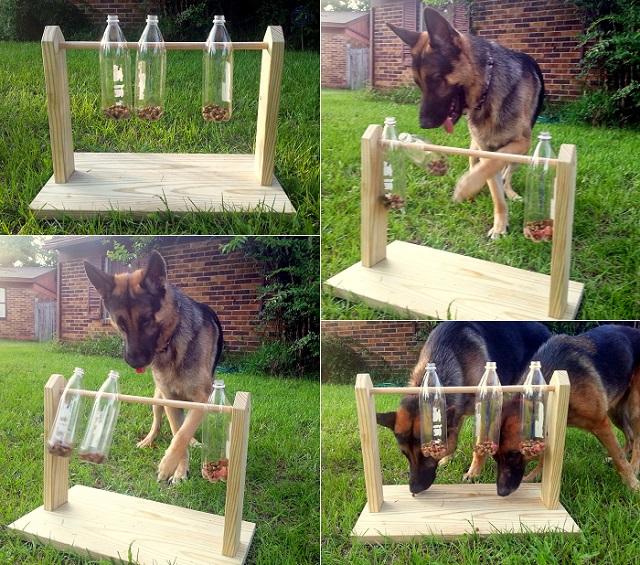 I am likely overthinking this but would like to know either way. I need to cut out circles from these bottles. Cutting the circles with something like a box cutter seems likely but that is hardly a precise tool. Theoretically I will be applying pressure to force the blade where I need to cut. If the plastic gives I will be putting in hard edges instead of cutting curves. This bothers me since hard edges might prevent the bottle from resting properly in the device, spinning around or could cause it to start prematurely tear the plastic.

How can I cut a relatively perfect circle out of a plastic bottle like a 2L pop bottle?

tool-selection plastic
Share
Improve this question
asked May 12 '17 at 12:49

Kind of off the wall, but here goes:

Fill the bottle with water and put it in the freezer until the water becomes solid ice. (best not put the cap on in order to allow for expansion of ice.

Plastic bottles are easy to cut with a sharp scissors.

Before cutting your circle, draw your cutting line onto the bottle with a marker.

Before you can cut with a scissors, you have to pierce the plastic with a stiletto or knife. That piercing will be messy, so pierce in the center of your marked circle. Then use the scissors to cut from the center to the marked edge of the circle.

Because your circle is so small, use a small scissors or manicure scissors. Cut counter-clockwise around the circle (unless you are a lefty).

Because the plastic is quite thin, it will not hold up well to a rotary cutter such as a hole saw or similar cutter. A trammel type cutter would likely be much worse. The only way I can think to make a cutter of that type to function properly would be to create a sandwich of some sort, quite impractical in the case of a bottle. Filling the bottle with sand might provide the necessary internal support, and not damage the cutter too badly.

Continuing along that line of thought, consider to fill the bottle with clean sand and use heat in the form of a piece of pipe or tubing, as you reference in your post. The surfaces created by doing so will not likely cause additional problems with your design as shown in the photos. A rolled edge or similar result from melting the edges may provide additional rigidity and additional material to wear longer than a bare edge otherwise created.

With sufficient heat, you would not have to have sand inside the bottle. For your project, even a little distortion of the hole will not invalidate the effect or operation of the bottle.

EDIT: Just returned from a few experiments. The first, a hole saw on a similar bottle, perhaps slightly thicker wall than a 2L bottle was illuminating. The pilot bit went in well enough: 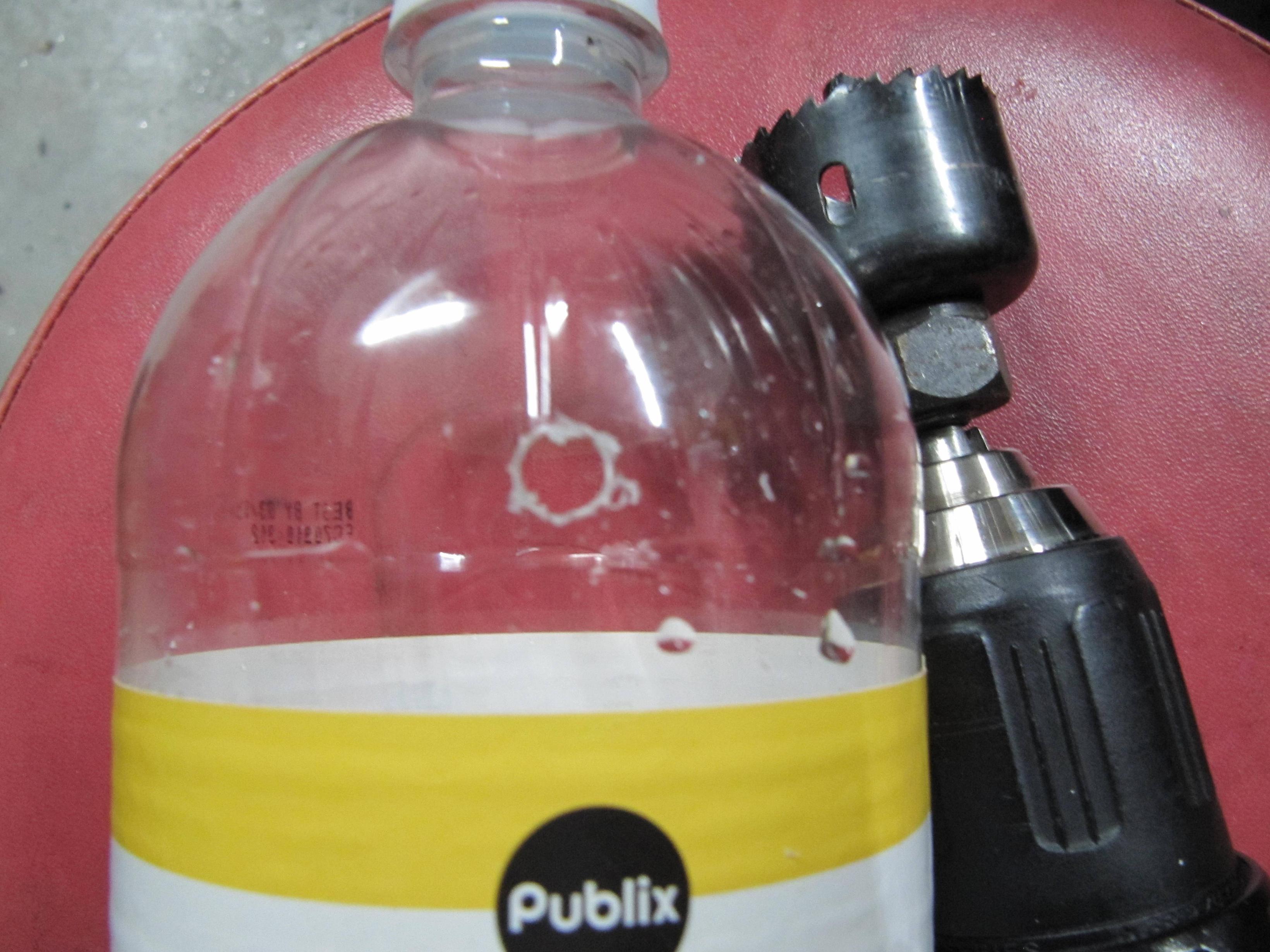 But the hole saw caught as the cut was nearly completed and had to be torn from the bottle: 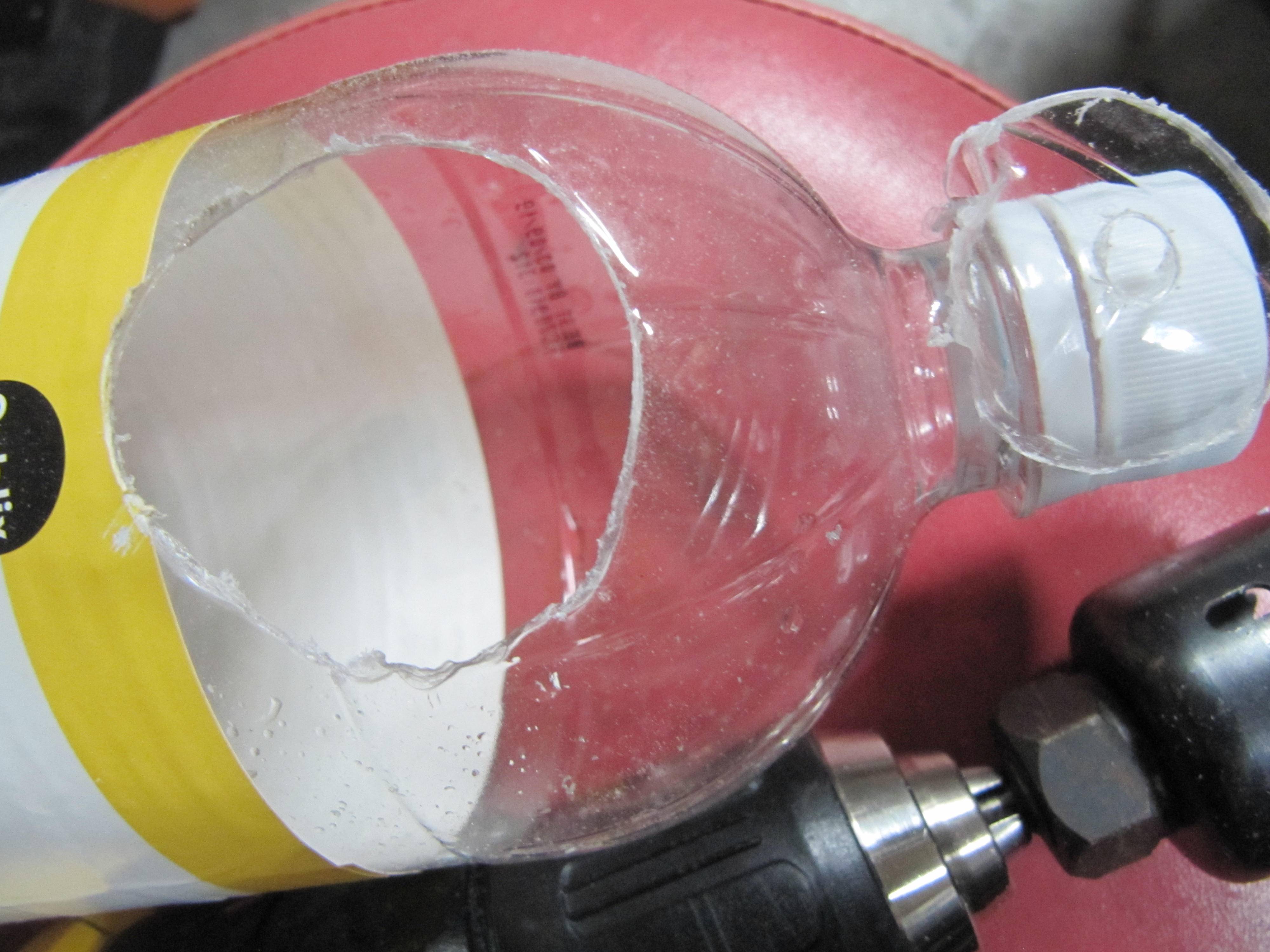 Attempting the same with heat was much worse: 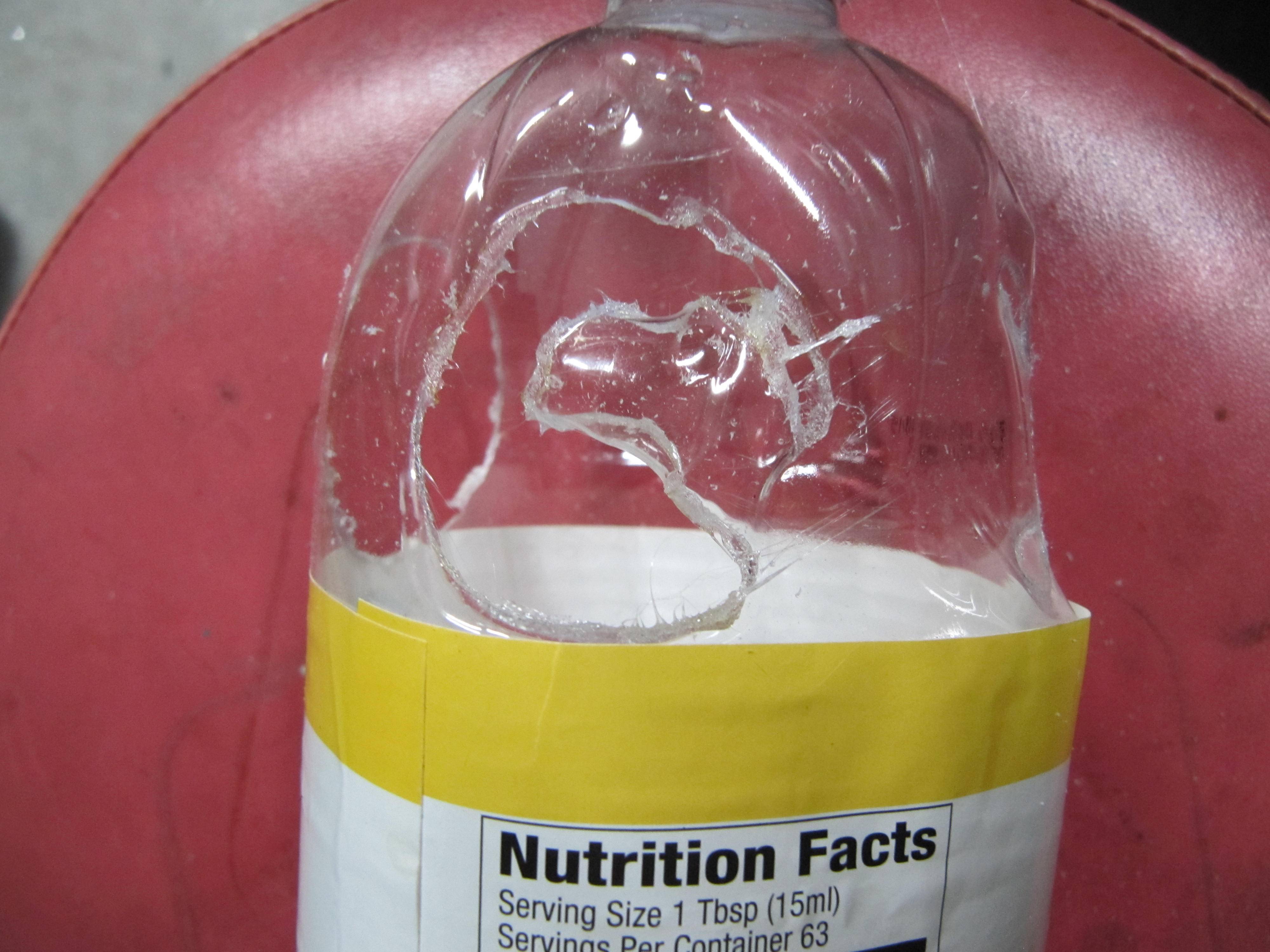 All of these attempts would have fared better with internal support such as sand or similar granular matter. The heat might yet be the best, as the failure on this attempt was mostly due to lack of support from inside. The hole in the last picture that is "around the back" was a failure because I accidentally played the torch on the piece of pipe while in contact with the bottle. The flame melted more of the plastic than the pipe did, making this mistake valid only in the form of what to avoid.

Not the answer you're looking for? Browse other questions tagged tool-selection plastic or ask your own question.

5
What is a proper tool for papercutting?
6
How can I cleanly cut thick plastic straws?
2
Plastic/Glass for a very large, custom frame
4
How would I cut out lettering from a stamped piece of thick-sheet metal
2
Interlocking plastic, rubber, or foam product that can be cut to size?
1
What types of large plastic sheets can I draw/paint on?
1
How to make plastic badges?
3
Engrave a design into slate sheets
3
Rectangle-Cylindrical Enclosure ideas?
2
Can I mold plastic (HDPE or LDPE) in silicone?