How to erase pencil under ink?

I use an HB pencil, very light, to sketch before drawing with ink.

The problem is that when i erase the pencil under the ink, the ink seems to fade.

I'm using the wrong eraser or is the ink quality that fade?

Erasers don't really just pick up pencil marks. They work by abrading away a thin layer of the paper, to which the pencil medium (generally graphite) has adhered. The abrasion is a sort of side effect, as the real intent is to disturb the bonds of the graphite to the paper (or cellulose) and allow the erasers to bind instead. Cheaper erasers are less binding, so work more on abrasion.

If the pencil mark is below the ink mark, then removing such a layer of paper will remove a layer with ink on it, as well. The same activity that allows the graphite to bind to the eraser also picks up the ink particles.

The ink fades, but doesn't vanish, because the nature of the ink means it penetrates further into the paper, rather than just the topmost layer.

One solution would be to apply only a basic layer of ink above the pencil, leaving you the opportunity to reapply the ink after erasure. However, if you're not dealing with completely opaque inks then layering this way may affect your end color.

Another solution is to not erase at all, and instead use a light box start out your inked worked on a completely new sheet of paper. (There are also some transferring techniques, where you could convert the pencil sketch to and underlay in ink, but I'm not versed in them enough to explain, and you could still run into opacity issues with non opaque inks).

I don't know exactly what type of art you are doing. but since you are inking over pencil I will assume possibly comic book or manga style. If you want an easy way of getting nice inking over pencil sketches. I learned as a tattoo artist one expensive and one cheap method.

I use Koh-I-Noor rapidograph pens and india ink. the Mylar isn't cheap and the pens I use cost $200 for a set. but if you clean them and take care of them they will last forever or until you lose them.

I hope this helps 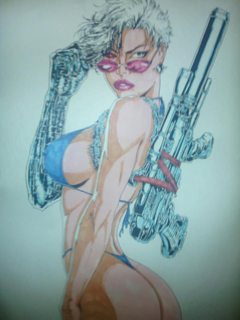 First make sure the eraser is not abrading the paper, by working a small area several times and then inspecting it carefully.

If the ink is made from pigment particles, some particles must be loose and able to be picked up in the same manner as the pencil marks. So, what kind of ink is it? Traditional India Ink is lampblack with a little shellac added as well. A water based ink without a binder may dry back with more particles than are directly stuck to the paper fibers. There will be different behavior with smaller particle size and dye based inks. In particular, ink that’s safe for fountain pens will have no binder.

So, try different inks, too.

You might also see what’s happening using a kid's microscope or a pocket microscope tool.

OK, so in compliance with the above mentioned issue of the eraser actually removing (even a tiny) portion of paper layer, like Bristol paper for instance, I have found the following to come in rather handy. Before I start to draw with my pencil, I use the eraser on the blank page and basically erase the whole page, while it still has nothing on it. This way, the initial piece of thin layer is removed and I have far fewer problems with fading after I erase the pencil lines.

It's not a given, it may or may not work, but it has reduced by substantial levels the frustration on my part. Oh yeah, and if you do try this, do your best not to wrinkle or fold your blank page.

I dont know if you're fond of makeup. but think of the pencil you sketched with as foundation and the marker/ink as eyeshadow,mascara,eyeliner, or etc. If you wipe that base with soap and water (eraser) its going to remove/fade your precise inking or makeup

26
How can I avoid smudging my pencil drawings?
11
What eraser can I use with wax core coloured pencils
11
Which kind of pencils should be used by a beginner for drawing?
8
How can I draw realistic hair with pencil?
5
Am I going about learning to draw the wrong way?
4
Can pigment ink somehow be used like a stamp-pad?
0
Are there any pros and cons of using more than 5-6 grades of pencils for a single drawing especially a portrait?
9
Future-proofing paper and ink letter
3
Is there such a thing as a refillable porous point pen?