Is epoxy a reasonable adhesive choice for repairing pottery?

I need to repair a cracked pottery bowl - an epoxy seems like a reasonable choice since there are some gaps of around 1mm width. The material seems fairly porous, and is maybe 3-4mm thick.

Obviously this is only going to be good for display, so I don't need to worry about temperature resistance or toxicity too much.

Is epoxy the best choice here, or am I missing something else?

Epoxies are really versatile and can give very strong results. It would have been the first thing I considered as well.

since there are some gaps of around 1mm width

Likely not an issue but most glues need perfectly mated surfaces for good adhesion. There are expanding glues, like Gorrila Glue, but most? epoxies are not meant to fill gaps. As long as there are sufficiently mated surface area this would be a non issue. If you do end up gluing it, think ahead of how the project will be sitting as it dries. Epoxies and take several hours to cure. If something shifts during that time you might be stuck with it (Ha, I made a pun)

I am glad to see you already took some precautionary thought when it came to temperature and toxicity. I would have asked other wise if you had concerns about food safety. Some epoxies are food safe once cured and most have varying temperature tolerances. Read your product documentation carefully.

I used a cheap 2-part epoxy to repair the handle on my pottery mug that broke in 4 places after I accidentally threw it of my work desk. 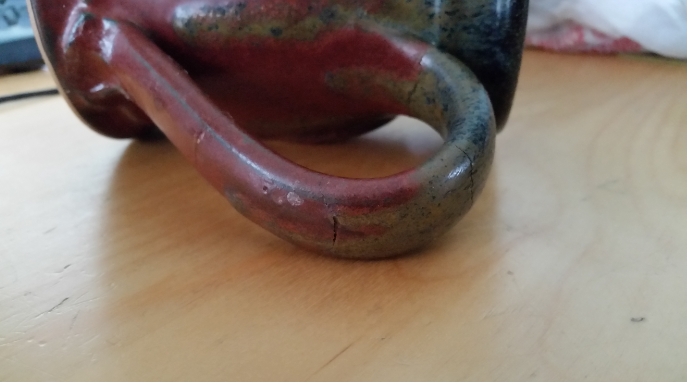 Part of the handle shifted while curing, as I can see a crack (not very visible on the right hand side of the photo) that should not be there, but it has held strong for over a year now. The "crack" you see in front is a void because I could not find the chip the came from there.

By epoxy I presume you mean Araldite etc. Do not use this, it has too much bulk and you will never get a good fit. Use superglue to stick it together to begin with, and then you can fill the gaps with a suitable filler. I have used Polyfiller, which then gets sanded, painted and varnished.

I have tried and failed too many times to re-repair items done with epoxy. It takes too long to set, giving plenty of time for the pieces to slip, as you have found out. You cannot then remove the glue for a second chance.

Superglue will give an almost invisible mend (depending on condition of break) and also sets quickly enough to hold together with the fingers (carefully!). This, combined with filler for any missing splinters, will give a repair plenty good enough for display and probably for restricted use.

Not the answer you're looking for? Browse other questions tagged adhesives epoxy-resin pottery or ask your own question.

12
Multi-unit pottery kiln - how hot can it go?
3
best adhesive for foam
3
How to dry out epoxy resin faster than usual?
2
Epoxy: adding fresh over cured
1
Create large objects from epoxy
1
Can epoxy fluidity be changed, before it is cured?
5
Curing non-UV epoxy resin with a UV light?
5
Can I use epoxy to stabilize/restore 18th century giant pottery?