I want to make some kind of lenses.

I want to dye (or buy) a piece of white glass or plastic (whatever works best). However, I still want to be able to see through it - I guess about 80% white and 20% transparent. I only need to see through from one side, so a mesh would probably be a good idea, although it is not the preferred solution.

One side should be dark, the other bright most of the times, and the white side (as perceived from the bright side) should be perceived as white even if the "outer" person is very close to the glass.
The "see-through" from the inner site doesn't have to be as perfect as a two-way mirror. It's okay if the person has to get really close (like the distance of sunglasses), but pinhole glasses won't do it.

How could I solve this problem?

I like the airbrushed part of the visor on Robocop by Legacy Effects: could this be a possibility? How would I do this so it remains a little bit transparent?

If you put clear tape on frosted glass it becomes see-through. You could try that if it's meant to be a momentary peek-though situation. 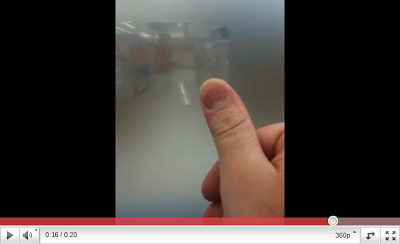 Or you could mostly frost it with white alcohol ink. Just leaving enough of an open lattice to achieve a veiled appearance.

I'd think a decent way to accomplish that would be to put on some gloves, wad up a small piece of fabric, wet it with the alcohol ink, then dab it on the glass. Practice on a scrap piece of clear plastic a few times to get the technique down, like from a 2-liter bottle that you cut apart.

I remember hearing about see-through concrete that had similar properties: link to article

I'm not sure about white particularly but you can buy colored transparent paints, even some Walmarts have it. It's mainly used to give the appearance of stained glass but depending on how thick you spray it on, you can see through it!

19
What can I do to smooth and polish hand cut glass edges?
5
Can I dye a pumpkin?
5
Transparent paint to change color of diffused acrylic sheet?
7
Method for embedding rock mosaic in transparent material
3
How can one blow/work with borosilicate glass to a container of precise dimensions?
5
Dyeing hard polycarbonate plastic
4
Can you turn a normal mirror into a one way mirror?
6
How should I fix a large mirror ball with many cracked mirrors?
3
Sourcing or making smooth edged glass tiles
4
How to completely dye or tint or color clear transparency sheet?