How should I go about designing clothing for a teddy bear?

While I can sew on a sewing machine, I've never created a pattern myself, and only seldom worked with them. Now we decided to create a jacket or a nightdress for our teddy bear. The problem is how to create a pattern for it, which we obviously have to prepare ourselves. It can be very simple, of course, but teddy bears have a bit bulky body, primarily oriented to be sitting, which further complicated things. Any ideas where to start? 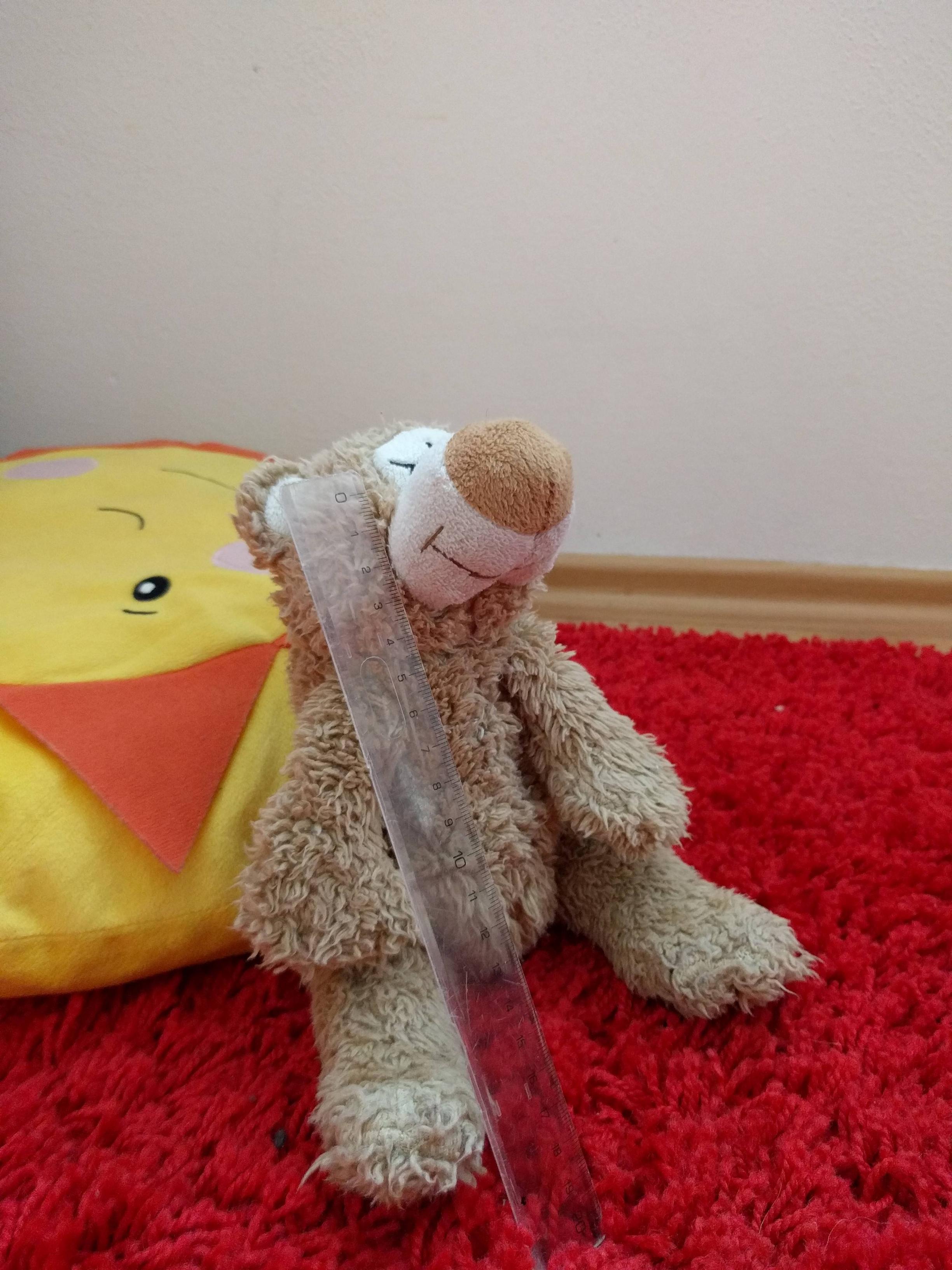 One easy way to create a pattern would be to base it off existing clothes for the bear. If you have some, you can trace the sections onto paper and modify from there.

If you don't have any templates like that, you'll need some basic measurements:

You can use these measurements to make basic pattern pieces for a top:

Your teddy bear clothes will likely be similar to doll clothes, so perhaps you can find patterns for similarly-shaped dolls to use for examples. The trickiest part will be figuring out the shape of the arm hole, aka armscye.

You can work it out yourself by making a paper pattern. I recommend tissue paper since it is most flexible.

You should end up with shapes that look roughly like this - a scoop from the sides of the torso, and a curve on the end of the sleeve. There's lots of resources on how to shape these for people clothes. For a bear, I wouldn't sweat it, since it will have its arms in the same position most of the time and won't complain if it's a little off!

The neckline hole is also important. Whether you can get it over the bear's head will depend on how "squishy" your bear is and how much the fabric can stretch. You can either plan to make the hole big enough that the bear's head will fit through, or make a slit to accommodate it. A lot of my doll's shirts are fastened with velcro in the back, for instance. Either way I would start by cutting a hole to fit the neck circumference, and using trial-and-error to enlarge it.

Once you have a basic shirt pattern worked out, you can do the variations you mention. A night dress would just be like an extra-long shirt. For a jacket, you would cut the front pattern piece in half and add width for overlap and seam allowances, and add a collar or a hood (google pattern pieces for the shape, or use the tissue paper method again).

For a simple night dress, you can make a tube out of fabric which is just wide enough to go around the body of the bear, from just under the front legs down to as long as you like it.
Attach straps to go over the shoulders.
I would go for separate straps on the front and back, tied on the shoulder, for simplicity. If you want to make a once on never off you can also sew the straps in place.

Less simple but still rather basic is a T-shirt shaped item. You will need flexible fabric, as the bear will not be able to move much to help you and it likely has a rather big head. I would not close the shoulders. For a once on and leave, you can hand sew the shoulders by hand or finish off the shoulders and neck like baby clothing and use snaps to close (and re-open) it.

To make the patterns, take the measurements, cut the pieces out of paper and try them on the bear. That way you can adjust before even starting to cut the fabrics.

A simple jacket is made like that, tube for body and smaller tubes for arms, and 'cut' the front of the tube. It might be possible to get it on by moving the arms or even bending them (if just stuffed and not moving) but if that is not impossible you can sew (by hand) it in place.

There are patterns for dolls and stuffed animals clothing online, you could use some of that for inspiration and adjust the pattern parts to the measurements of your bear.

Edit:
It looks like your bear has very flexible arms, the kind you can push through sleeves in T-shirt shaped clothing, and a relatively small head (compared to other teddies) so a regular T-shirt with a wide neck will already be possible.

To measure I would take a tape measure (or a bit of string which you put to the ruler later) just under its arms as well as just above its legs where the tummy seems to be on its biggest.
Unlike T-shirts for humans, for your little fellow you want the sleeves a bit forward, measure the difference between the distance over the back and the front, I guess it may be as much as 2/3 against 1/3.
For the size of the sleeves, measure on the lower end, where they are wider.
If the fabric is flexible, you can make the sleeves a bit narrower further up, but stiff fabrics will not let the paws through if the tube is narrow.

These same measurements will hold for your jacket. With a fellow as flexible as this, you can use almost any fabric, as long as you are happy to sew it. Just remember to make the sleeves wide enough for the paws.

Not the answer you're looking for? Browse other questions tagged sewing pattern-drafting or ask your own question.

9
What kind of stitch makes up t-shirt seams on commercial grade clothing?
6
What stitches are strong for clothing seams when done by hand?
9
How can I trace a pattern from a top with darts?
7
How can I cover my desk chair's seat?
6
Efficient cutting and preparation of fabric for sewing clothing
8
How should I select elastic for a sewing project?
6
Pattern for adding train tracks to a simple stockinette square?
2
Drafting tapered pants for better outer seam pattern matching?
0
What should I look for when I look for sewing machine needles?
3
How I can design a skirt pattern without taking measurements?