What should I use to connect my empty toilet paper rolls?

I'm building a pyramid made out of empty toiler paper rolls. I'm creating the pyramid as a bunch of rows, with the first row being a singe tube, the second one has two tubes connected, etc. (When it falls over this makes it a lot easier to reassemble, and makes it more portable (although at 36 rows it's sort of impossible to move.).) 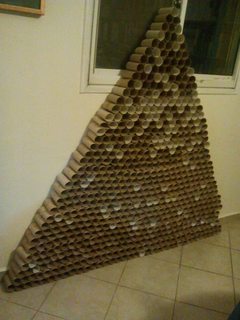 But I need something good to keep the rows together. I've tried using

Each of these was insufficient in some way. 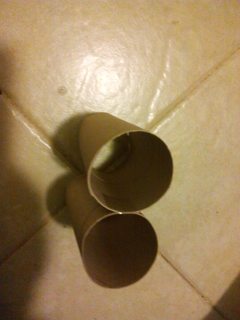 This was easily the worst, and also my first. I took two rolls, and a length of tape, and put the tape on the ends, the thin part. Sort of like [/][\]. On both sides.
This didn't work well, as the tape didn't always stick. It also got dirty and fell off. And when the pyramid fell, the tape would often fall off, defeating the purpose. 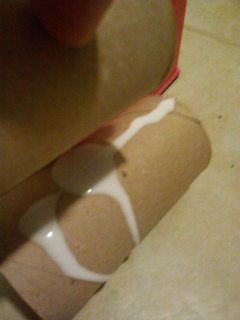 This was okay (my second try). I glued the rolls to each other by the sides, sort of like []|[].
This worked... meh. The glue took a long time to dry. When the pyramid fell over, the rows would sometimes snap. Not often, but as the glue got older, it started to break more often. And it was very, very, hard to move the position after it dried. 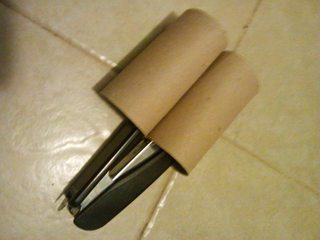 They don't take that much effort, and they usually hold. But they tend to fall out/bend if I leave the row bent for any length of time.

Is there something else that I can use that

Paperclips (even if just from behind, though from both front and behind would be sturdier; each tube would be clipped to all the tubes adjacent to it).

[Edit: oh, btw, the ends of the paperclips should penetrate through the adjacent walls of the tubes for greater stability of the lower rows as the pyramid gets taller]

I would think a hot glue gun should work fairly easy for this. It would be simple and quick to apply to the tubes. Dries fairly fast e.i. minutes instead of hours compared to the time the white glue would have taken. You wouldn't need to apply too much.

You can get a gun and sticks easily from craft stores and even dollar stores for cheaper. Even the cheap ones should be fine for this. There are better glue stick out there so depending on how permanent you want this structure to be you might want to opt for better glues.

The only downside to this would be that some glue guns tend to leave glue wisps or tails after applying. I could see this being annoying but it would not change the outcome of the project.

If I have time in the near future I will try an make a smaller scale model of what you are going for there in case there is any trepidation.

You can tie them by using thread.

A Brass fastener / split pin might do the job. Probably similar to staples, but as they're thicker, maybe they're less likely to bend and fall out.
And of course, you can combine any of the mentioned methods.

Not the answer you're looking for? Browse other questions tagged medium-selection or ask your own question.

9
As a calligraphy beginner, what features should I look for in an ink?
8
What type of paint should I use to decorate a kitchen appliance?
11
What type of paint should I use for stone painting meant for outside
12
What material can I use to dye paper to look older?
6
What paints could I use on nylon fabric?
7
What paint to use for outdoor plastic chairs?
9
What kind of paper to use for airbrush practice?
4
What glue can I use for glass and polycarbonate bonding?
4
Should 300 GSM toothed water color paper be used for pencil colors?