Will there be a noticeable offset if knitting rib from an unravelled edge?

I'm in the process of knitting a jumper 'freehand', i.e. without a pattern. I started from the bottom edge, knit in the round up to the armholes, split the knitting, continued to the top of the shoulders, and then did a three-needle bind off to join them.

The problem is that now I've got that far, I can clearly see a flaw in the earliest part of the jumper which wasn't apparent before. For the first ball of yarn, I was knitting much more loosely, so the first few inches bell out a bit, sort of like a skirt. 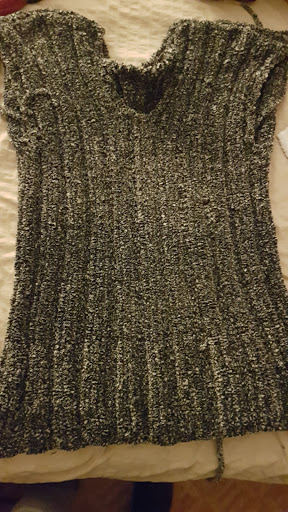 The obvious solution is to unravel the offending portion and re-knit. I have plenty of yarn, so wastage isn't an issue. Normally I make socks or lace, so large pieces like this are less familiar to me and I did a bit of research to make sure I don't mess it up. It seems I have two main options.

Option 1: Cut the bottom piece off just above where it flares out, re-knit the entire bottom portion as a separate piece, and graft it back on. In one sense this is the simplest since it involves repeating the steps I've already done, except for the grafting. I really don't like grafting, and the yarn I'm using is very fluffy and hard to read the stitches, so I can see this being a real nightmare.

Option 2: Again cut off the bottom piece, but just pick up the raw stitches and knit downwards until it's long enough. I prefer this idea, but I know that this technique means that the new knitting will be offset by half a stitch. The pattern is k2p2 rib, and I'm worried that there will be a visible line at the join. I did try knitting a swatch to test it and I couldn't see a noticeable join, but like I said the yarn is very fluffy and it hides a lot of the detail so it's possible it would only be visible after I finished and it was hanging down, just like the original problem.

I've done a lot of searching for the answer to this, and it's possible that I'm missing some search terms which would help find it, but so far I've had no success. The closest I've found can be seen in this article: How to undo your knitting - it does call out the problem of the offset stitches but doesn't specifically address how rib will behave in this situation.

(Sorry if this question is too long, I wanted to be sure it was clear enough.)

(Adding here The Answer that the OP identified in Comments as The Ultimate Solution to her dilemma...)

Based on the link provided by OP @Tara-Hanratty, Grafting Knitting, Myth 2: Grafted Ribbing Will Always Have a Half-Stitch Jog, here is the answer:

The author, Joni Coniglio, explains that the half-stitch jog in grafted ribbing is not actually unavoidable, as many knitters apparently believe. Knitting direction, not merely knitting stitch choice, turns out to be the main factor in whether a half-stitch jog will appear in grafted ribbing. In some well-smithed word craft, accompanied by beautifully clear and understandable visuals, Ms. Coniglio deftly explains the very complex and nuanced behavior of top-to-top oriented grafting, which will create the dreaded half-stitch jog every time. I am not shameless enough to cut and paste her eloquent verbiage here, nor am I capable of adequately paraphrasing something so akin to brain surgery. The link will have to suffice.

More to the point of Hanratty’s specific question, Coniglio goes on to share the happy news that top-to-bottom oriented grafting does not produce the half-stitch jog: 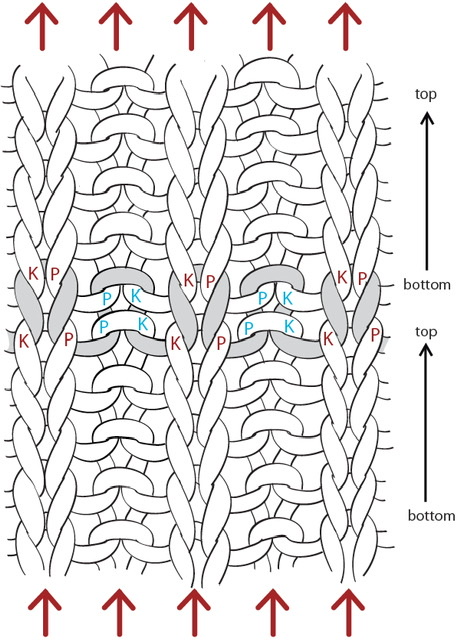 Therefore, Hanratty may proceed to whack off the offending and unmasculine bell-shaped bottom of the project, and graft a ribbed bottom section onto it in the top-to-bottom grafting procedure outined by Coniglio, resting assured that a half-stitch jog will not appear.

Further complex and amazing instructions are provided in the article for Picking Up a Provisional Cast On, and Written Instructions for Grafting k1, p1 Ribbing Top-to-Top and Top-to-Bottom. Links to four video tutorials on all of these topics reside at the bottom of the page. Surely this Joni Coniglio must be The World’s Foremost Expert on Knitted Grafting!

You're correct in that the fluffiness of the yarn and the colour of the jumper should hide the offset to some degree. Most people won't pick up on the change unless they are looking really closely (and really -- who does that?).

TECHknitting did a series on grafting that addressed ways to disguise this particular dilemma. If you haven't already read it, you may find it helpful. Between these tricks and the yarn itself, no one will ever know :)

There is no problem with either strategy.

For 1), this is what I did on my last jumper. I had miscalculated the row height and knitted it too long, so to shorten it, I cut it through, unravelled 5 cm and grafted back the old (ribbed) bottom. 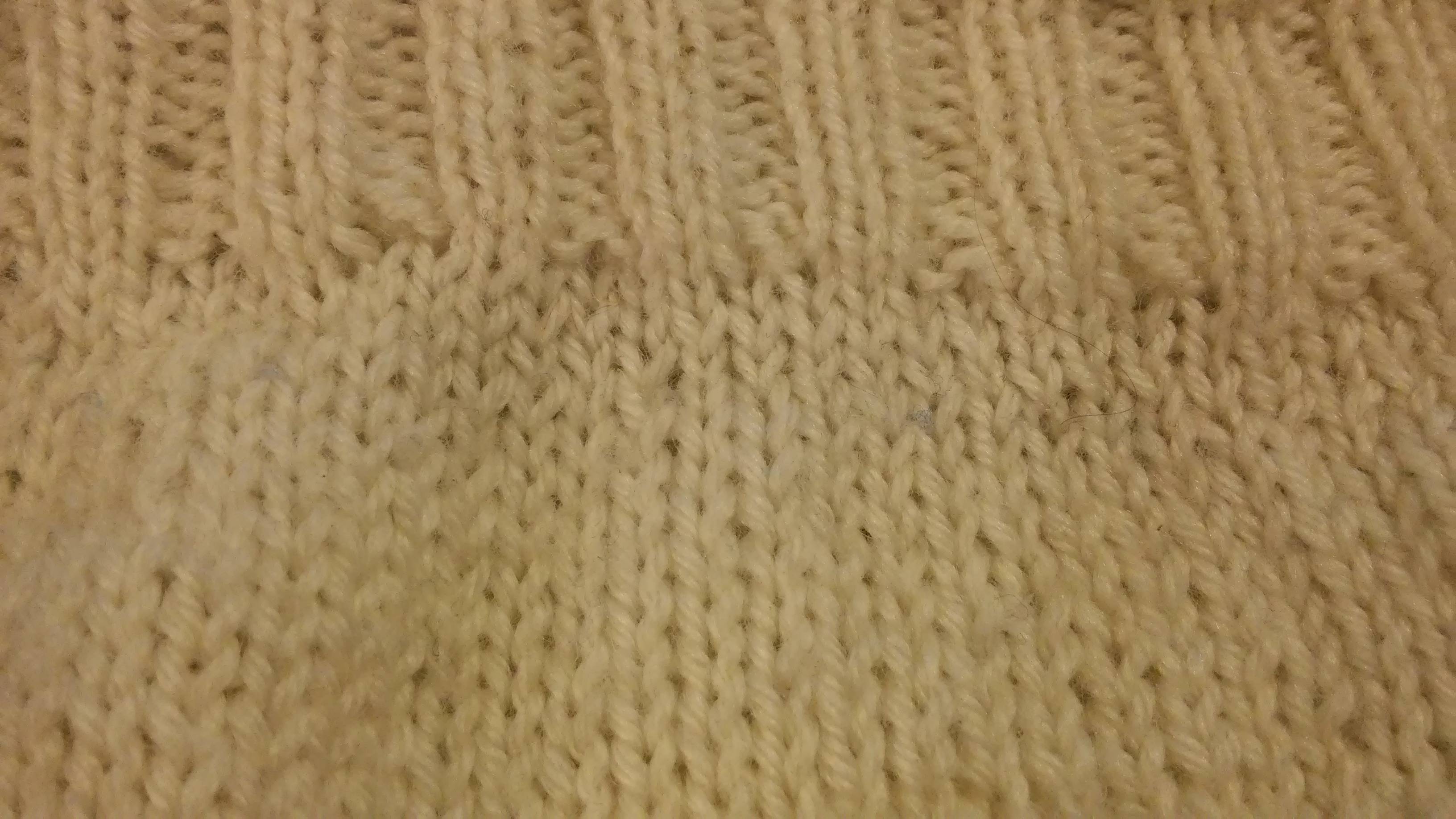 Grafting was done about 3 rows from the rib. It is somewhat more visible in reality than on that bad quality picture, but it is still very good and not really noticeable when wearing it. It is certainly less noticeable than the Russian joins throughout the jumper. This is Norwegian wool (not merino), a fluffier yarn will be even more forgiving.

For 2), this happens all the time in machine knitting. Ribs are done on a different machine or by hand, and then grafted onto both the top and bottom part of flat knits, or live stitches on the bottom picked up and knitted in rib by hand. A very experienced knitter will be able to tell the difference after close inspection, but it is not inherently ugly even when noticed.

A third option would be to do nothing. Many patterns have an intentional A-line fit or a waist-nipped fit, and your ribbed sweater will snug onto your body anyway, so it will be already wider at the hips. Sure, these fits are normally done by reducing stitches, but changing the needle size is also a legitimate way to do it. In your case, it was loose knitting instead of larger needles, but nobody can tell the difference.

Also, don't forget - when you walk through the streets, maybe about 5% of the people you meet are even aware that sweaters can be raglan or set-in sleeves, and even among those, most will take no note of your jumper. And that's for a fairly visible clothing construction characteristic. If you feel self-conscious wearing a sweater with an offset rib, remember how insignificant it is for those who see you in it.

8
How to invisibly join superwash singles yarn?
12
Is there a difference in stability between prestringing and placing a bead?
7
Is there an easy way to remove pet hair from knitting projects?
6
Which needle size will give me the longer scarf?
6
Pattern for adding train tracks to a simple stockinette square?
6
How to give a mitt knit in the round a pointy finish?
6
Knitting pattern in the round
5
How to regain a row of slipped stitches?
3
How to knit a thumb on a (fake) mitten?
9
How to carry the yarn in stripes?