I'm trying to make pretend coins out of sand, so that they are solid enough say, to hold it by the edge and it not bend, but brittle with so that if I crushed it in my hand it'd crumble back into sand.

At the minute I'm trying to do this by mixing various consistencies of pva glue and sand, and am getting close but it's just not as brittle or as solid as I'd like it.

Ideally I'd like it to be in similar consistency to say that of a cracker or ryvita - which I would use for this project except that after it is crushed it should appear as close to sand as possible.

Any advice would be greatly appreciated, thanks :)

I'm using sand bought for arts and crafts that I bought on eBay, so the sand is very fine. As for ratios / consistencies, I've tried with PVA glue and rubber cement (seperately) with 2:1, 1:1 and 1:2 ratios with the sand (roughly). Too little PVA and the sand doesn't stick, too much and it becomes a bit 'floppy'. I didn't know if there was a different type of glue I should try, or with a mixture of something else. I've also tried with kinetic sand, but that doesn't break as well as normal sand.

My most recent attempt I used a lot of PVA glue to sand, which worked but was slightly floppy - however I then coated it in metallic spray paint which seems to have made it hold together solidly. I haven't tried crushing it yet to see if thats even possible, but could the spray paint on its own potentially be a solution?

Fascinating project. The solution was right in your question; make it like a cracker — flour.

You're essentially making a sturdy paste instead of a glue. I mixed:

I drained off any excess water, packed it into a mold and let it dry in the sun (1-2 hours?). I guessed at the proportions empirically, but it worked great! 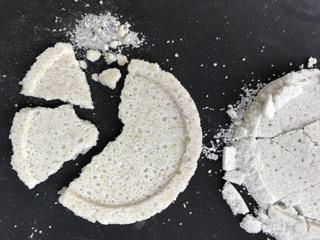 The disc to the right is a failed experiment with cornstarch

The coin was pretty solid… yet breakable. I could carry it around and drop it from a few feet without breaking it, yet I could snap the disc with a bit of deliberate force, and crush it down into sand by pounding it or working it between my fingers.

…after it is crushed it should appear as close to sand as possible.

Bonus that you're not adding anything permanent or inorganic to the sand. I could not see any flour when I crushed the coins back into sand, and dropping it into a cup of water broke it down completely (which makes it easy to pour off the flour-silt, if that's important to you).

Not the answer you're looking for? Browse other questions tagged adhesives costume-design props or ask your own question.

36
How can paper be glued to cardboard without creating wrinkles?
5
Which glue works best for paper sculptures
3
Making 50th Anniversary Invitations - Card Stock won't work in printer
14
Which glue should I use to attach paper to glass?
5
How can I remove glue from leather without ruining the leather?
2
What kind of glue to use for **large area** paper to wood that is visible while wet?
2
Stencil on wood issue
4
Is there a grade or type of paper that will take glue without wrinkling?
5
Which glue should I use for fabric-shaping?
3
I need a glue that won't turn opaque or run

// TODO sg: TMP solution until we are confident in our current implementation of async imports // once we are, we can move the if into the js entry file and dynamically load the mark obsolete module