Is there an easy way to remove pet hair from knitting projects?

I enjoy knitting, and most of my family and friends seem to enjoy receiving my good projects as gifts, but every project from me comes with intricately weaved dog hair. My dog's hair is long(ish) and white. I usually end up sitting there and picking it all out as I go. I'm wondering if there is an easier or more efficient way to do this. Maybe there is some sort of protection for my ball of yarn that I could use?

Basically everything I find on the internet had to do with making yarn out of your dogs hair, so any suggestion is appreciated.

Jo-Ann's lists "Yarn Containers", essentially closed jars with a hole for the yarn to come out, that look like they might work to keep your yarn dog hair free while you work on a project.

You could also make a similar container out of something like an oatmeal box.

This is my attenpt to answer the second question: preventing the making of a pet fur garment in the first place.

Someone mentioned buying containers with holes in them for storing the yarn (to prevent hair from getting in it). But you mentioned having a family/being close with your family - so I'm wondering if you have any babies in your family? I kept all my formula cans because, well, craft brain.
Anyways, yarn storage. They're perfect for yarn storage.
While the smaller cans aren't great for USING the yarn while in said storage, I discovered that they're still great for laying down sideways to pop yarn into (to keep them from rolling around & tangling together. Because, again, mother of an infant, a very, very active infant). You can also still punch a hole in the lids & have some of the yarn coming through that hole for easy identification of the yarn... But the cans are too small to give the yarn enough "wiggle" room to flop about as you knit (or crochet). The big cans are perfect for not only storing the yarn, but also keeping the yarn in as you work. You can rinse the cans out before use, but I have been lazy and used large ziploc bags, stuff them inside, and pull the tops around the outside of the can. Fold the plastic lid in half, use a regular hole puncher to punch through both sides. If you have a fancy puncher that can go over the rim of the lid, obviously use that so you aren't stuck with two holes! But I do not... So two holes it is. I believe the larger cans are like 27oz, while the smaller cans are 14oz. 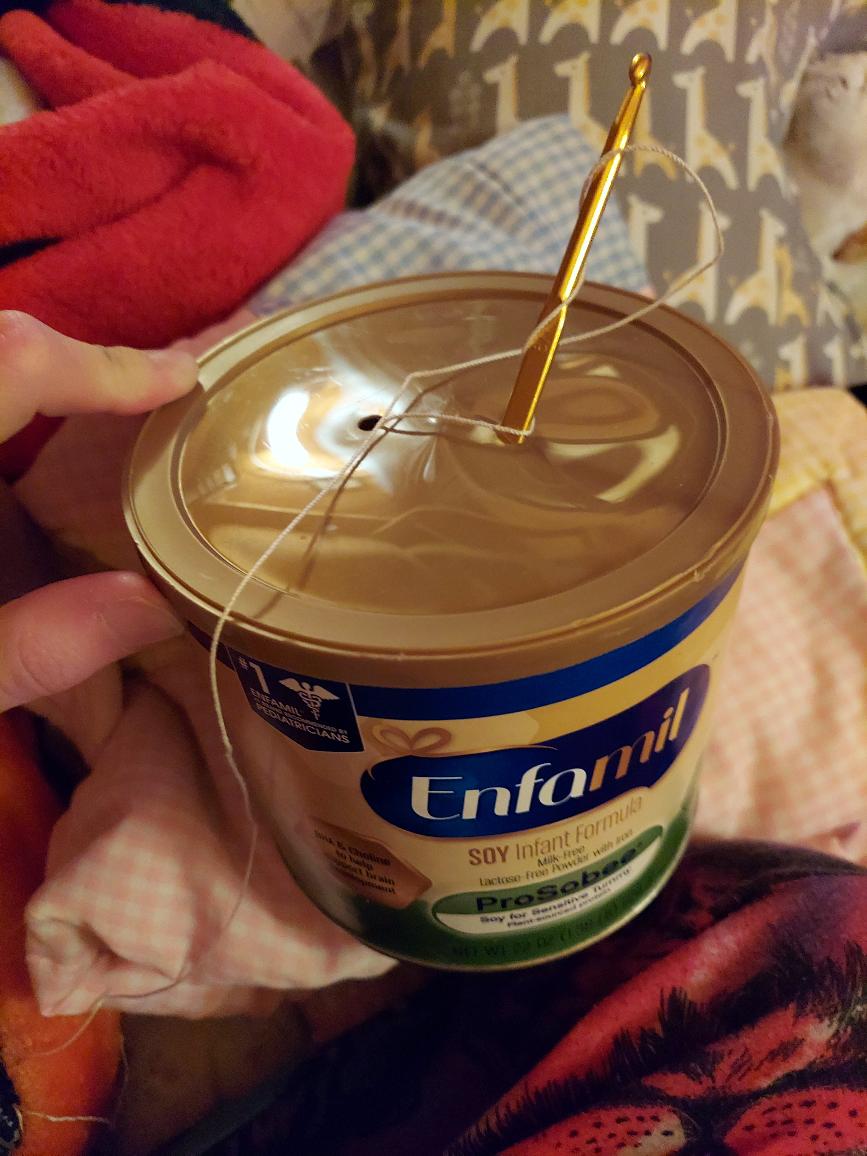 If there are no babies in your family, whipped cream containers are also apparently good, but can't be laid on their sides for easy identification purposes. I've considered using large oats "tube" containers, but I think they may be too narrow to work from.

As for removing the hair: I actually came here trying to find the same answer. But I did think of one possible solution, which isn't necessarily removing it, but "trimming it down", haha... So it'll remove any "fuzzies" (especially if you're using more slick/sheen yarn). Basically, buy one of those tools that remove the fuzzies from clothing - to very gently run over the yarn. You could also do this for a finished product but I was thinking before the yarn is stitched. Random, and I haven't tried it, but maybe it'd work?

I would start by using a damp sponge to de-hair the sofa or chair I'm going to sit on while working.

Then I would wind my yarn into center-pull balls.

Finally, I would put the ball I'm currently working with in a protective sock.

Maybe you can find/create a yarn bowl with a lid?
Maybe you can use some tape and see if the hairs stick to it. Duct tape is probably too strong for that.

If all else fails, you either have to pick out the hair by hand, or restrict your choice of yarn to white.

Not the answer you're looking for? Browse other questions tagged knitting yarn .

15
Is there a way to determine the fiber content of a yarn if I've lost the label?
3
Are there any stitches that are specific to knitting/crocheting only?
10
Will there be a noticeable offset if knitting rib from an unravelled edge?
7
My grandma's fingers are becoming too old for knitting. What alternatives are there?