On what factors does choosing pencil shading technique depend?

There are different types of shading techniques like criss cross, straight lines, circular shading, blending, scribbling, and dot shading (drawing dots close to each other).

Of course there are not hard and fast rules in drawing, but there are guidelines. Hence the question - on what factors does choosing shading technique depend?

The shading techniques you mentioned are generally used in pen and ink artwork. This is commonly visible in comic strips (printed in newspapers).

There is no need for these techniques in pencil, since graphite is easily smoothed into a steady transition from one color to another.

Ink does not smear the way graphite does and you cannot effectively shade an object in pen without the use of the various shading techniques you mentioned.

As far as which one you should use, it's all a matter of preference. Some artists choose to combine the different styles in a single work, while others pride themselves in completing an entire art project with a single style of shading (stippling is my favorite).

In short, you would be hard pressed to find this style of shading done in pencil, it's primarily for mediums which don't allow you to fade from one color to the other without some sort of illusion helping.

In it's basic form you are looking to choose your shading technique based on what you want your end result to look like. I only draw in pencil and usually that is a mechanical pencil or a basic HB2.

Most of what I will refer to here is the first drawing book I really read and used: Dragons: Learn to draw step by step

Other names for those are crosshatching (criss cross), hatching (straight lines), circular strokes (circular shading), stippling (dot shading). You also forgot to mention blending and basic scribbling. I am sure there are some other but I think that covers the basics.

The following picture from the book shows some of those shading techniques, done in pencil, in action. 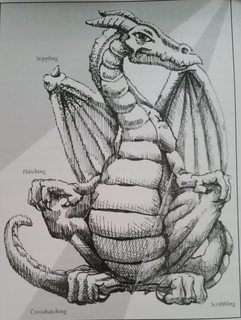 While these techniques are used with pen and ink they are not exclusive to those tools (Blending not so much). Since pen and ink are more permanent then say pencil some guides recommend that you do you rough drawing in pencil anyway. That would include shading as well.

Using pencil is a simple way to get a soft and subtle appearance.

Nothing really other than your desired end effect. As you can see in the above picture it is still a dragon regardless of the shading technique used. Personal preference would play a large role in this.

You could use a combination of cross and regular hatching as a means of having different levels of darkness but that is not the sole way of doing it. In the end it does not matter and pick whichever one would compliment the work best or whatever you think would look better.

It depends on the out come you want to get. for instance; You can not use straight lines shading to draw a wave, or circular shading to sketch a net.

If your doing net-like lines on a clothe,start with longitudi.nal lines then latitudinal lines

Not the answer you're looking for? Browse other questions tagged drawing pencil-shading .

11
Do I need to hold the pencil in different ways for different kinds of shading methods?
4
How can I do the hatching shading technique properly?
10
How does shading & blending with Carbon pencils differ from Graphite pencils?
11
What does it mean to "push your values"?
6
What are the different pencil/pen holding techniques for drawing? Which should be followed in which case?