What do those material measurement metrics for a drill represent?

I was looking forward to buying a drill for my crafts when I found this under the drill's photo:

I was wondering what do the metrics under the brick, wood and steel refer to? At first, I thought it was the maximum depth I can drill in these materials, but then I thought that this depended on the drill size and that it couldn't differ among different materials, so what are those numbers really for?

Thats the maximum bit diameter. There are a couple of limits that are relevant: the outside of a large drill bit moves fast, so you may have to slow the drill down, but then it becomes less powerful and could stall. An optimised drill bit is assumed (e.g. using an HSS bit in wood is fine for many tasks, but at the large end it won't work). In practice you can often go a little bigger than they say with flat wood bits: 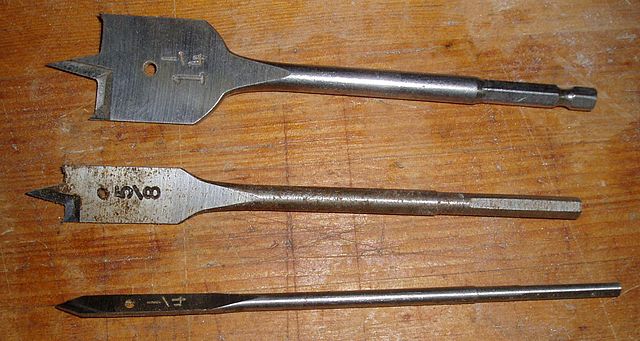 or hole saws if you're gentle.

For many applications it's possible to have a drill with a shank that's smaller than the cutting end, hence the chuck size is less of a limitation. For example step drills are used for drilling sheet material:

This one has a shank of about 10mm and a maximum hole size of 26mm, mainly for metals.

Reduced shank drills (or blacksmith drills) are used for deeper holes, again mainly in metals. These are a 16mm and a 25mm, with 13mm shanks:

Not the answer you're looking for? Browse other questions tagged tool-selection .

5
What is a proper tool for papercutting?
9
What medium should be kept beneath the paper for papercutting?
9
What are good tools for carving in cork?
3
What are some good tools to use for carving plaster?
3
What should I look for when getting a treadle sewing machine second hand?
5
What specs should I look for in a hobby milling machine?
4
Confused on what kind of drill bit I need for my sheet metal project
9
What is the best way to create a stencil for a large spray paint image?
2
What type of printer should I use for cardstock?
4
Guidance on what to look for in a paper cutter/trimmer