is there a term for graphics which can replace each other's sections or parts and result in two new graphics?

Imagine you take the left side from graphic 1 and right side from the graphic 2, place them that the left and right side are connected horizontally, then you take the sides left from graphic 1 and 2 and connect those the same way and that results in 2 pairs of connected sides forming two new graphics representing something else than they did when connected with their previous side. Is there a term for these kind of graphics? It doesn't strictly have to be left and right sides, it can be top and bottom. The two sides also don't have to be the same size or shape, as long as the connecting side "fits" with the other one.

The surrealist technique of combining sections of different images in order to create a unique composition is referred to as "Exquisite Corpse" or "Cadavre Exquis" (Ambrose & Harris, 2011). By aligning the sections creatively or along a similar outline, one can achieve very unexpected results, as in the following example 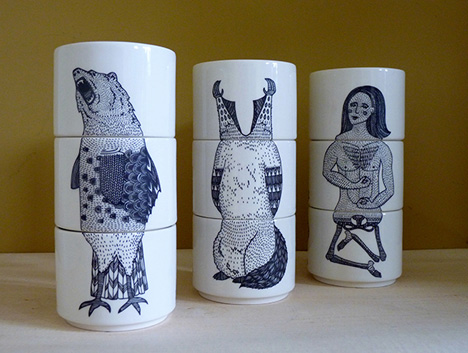 In these cup designs by Chloe Lee Carson, sections of different illustrations have been combined to create unique characters. Note that despite the name of this technique, Cadavre Exquis is not limited to animal or human imagery. In fact, it began as a word game where sentences were constructed in a similar unxexpected fashion. According to the Tate website, the technique's name is derived from one of the first games that resulted in: ‘Le cadavre exquis boira le vin nouveau’ (‘The exquisite corpse will drink the young wine’).

I think what you are describing is known as a "tessellating pattern".

Most famous practitioner of this art, in my opinion, was the Dutch artist Maurits Cornelis Escher.

I'm not sure if I can post an image here of Escher's work as it's copyright protected by the Escher foundation.

An example of Escher's work showing the tessellating pattern in action can be seen in the piece titled Regular Division of the Plane III, 1957 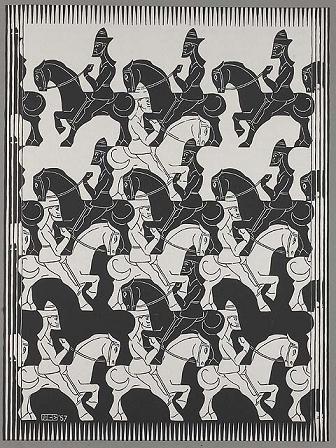