What do you call "negative" paint?

Many months ago, I came across an art medium used by painters. I cannot remember the exact term for this medium. It is white, but is transparent once used, I believe... having the consistency and appearance very similar to white liquid Elmer's Glue.

In essence (referring to this medium as Medium A), a painter would first sketch their desired image in pencil onto paper... be it typography or any image, really. Any spaces they wanted to remain white in the finished work (like lettering or small details, for example), they would paint and fill in with Medium A. Once medium A has dried, they would paint all over the paper (including over Medium-A-covered areas) with watercolor, typically with multiple colors. After the painting has dried, the artist would peel off Medium A areas from the painting, being careful not to rip up the paper fibers themselves along with Medium A. In essence, it has a resistance effect similar to a white wax crayon drawn underneath watercoloring.

An example of what the result after using Medium A could look like: 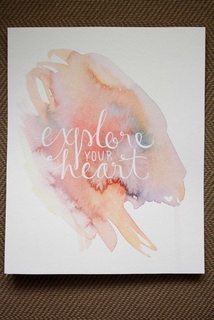 What is Medium A really referred to as?

I think what you are looking for is called a masking fluid. It is sometimes also called liquid frisket.

Masking fluid can be treated like paint which wherever it is applied will protect what is underneath. A feature of most masking fluids is that they are removable once dry.

Some masking fluids are strongly hydrophobic (water repellent), and water will bead on its surface. This can make it tricky to tell when the whole canvas is dry. Trying to remove the masking fluid but having some undried paint pooling on the surface can cause heartbreaking smears.

Some masking liquids change colour after they dry. This makes it easier to see where you have applied it, and easier to tell if you have removed it all after the work is complete.

Masking fluid is great for creating negative visual effects, like you describe. 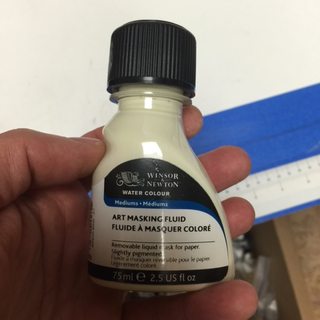 Not the answer you're looking for? Browse other questions tagged paint watercolor material-identification .

6
What are the strengths of chalk paint?
1
Casein Paint Shelf Life
6
Restoring a poster print using watercolour
4
Cracking on surface of oil painting. Is there any other way to salvage an oil painting?
7
Use of white watercolour paint
1
Can you use Poster Paint for fantasy miniatures?
4
Why are there air bubbles in my tubes of watercolor paint?
4
What sort of wall protectors can you paint?
2
Does water colour paint on miniatures wash out a when it is freely moving inside water or oil?